A watchful eye on Australia’s fires

Collaborative networks, expertise, and technical capability developed through TERN are driving a new wave of advancements in our use of satellite and other remote-sensing technologies, to obtain accurate, up-to-date information about environmental variables that influence fire risk, and to track fire in the Australian landscape.

TERN’s AusCover facility has already delivered a suite of data products and tools that are enhancing our understanding of fire in the Australian landscape, and are supporting efforts to manage fire. Now it is at the forefront of efforts to help refine, expand, and improve one of the key information tools used by fire management agencies – the web-based fire mapping site Sentinel.

Sentinel was launched in 2003 by a partnership of Australian agencies including the CSIRO, the Department of Defence and Geoscience Australia, and uses information from satellites to detect areas – or ‘hotspots’ – on the land surface that are noticeably warmer than the surrounding area. Although a hotspot does not always indicate a fire, this information continues to be vital in supporting fire fighting agencies in determining the locations of possible fires and fire risk on a daily basis across the continent. It is also important for planning their daily priorities for fire management. 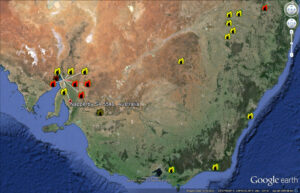 A screenshot captured using the Sentinel Hotspot Google Earth KML tool on Tuesday 28 January (above). The mapping tool provides timely spatial information to emergency service managers across Australia and allows users to identify fire locations with a potential risk to communities and property. A number of ‘hotspots’ can be seen in the vicinity of Napperby in South Australia, which was placed under ‘watch and act’ status on Monday 27 January (below).

Accessible via the web, Sentinel was a significant step forward in the collaborative efforts of scientists, land managers, and fire managers to better understand and manage bushfires in Australia. Sentinel is now well established as part of the standard toolkit used by fire-management agencies across the country.

AusCover and collaborators at TERN’s OzFlux facility are now leveraging their technical expertise and international links to help spearhead the development of the next generation of Sentinel tools with support from the Bushfire and Natural Hazards Cooperative Research Centre.

The refinements, referred to as ‘Sentinel-Plus’, will take advantage of new satellites being launched by German and other European partners to detect even smaller hotspots. The hotspots will be mapped at a higher spatial resolution of around 300 m, or better, compared to the resolution of 1 km that is currently possible. In effect, this will provide more accurate measures of temperature and enable mapping of fire fronts as they develop and progress.

‘We are working to improve the delivery of the reliable, detailed, and up-to-date information that fire fighters need’, says Dr Alex Held, Director of the AusCover facility.

‘Our European collaborators have invested a lot in the satellite technology, and thanks to our strong partnerships we’re able to access the data from these satellites. We can then add significant value in the analysis and delivery of this data, providing useful products for understanding and managing fire in Australia. Our products and processes can also be accessed and used by the rest of the world. It’s really a win-win for everyone involved.’

AusCover and OzFlux are also working with the Centre for Earth Observation Sciences at the University of Alberta in Canada, and South Africa’s Council for Scientific and Industrial Research to develop the use of wireless sensor networks, and smartphone and tablet data-delivery products for early bushfire detection and visualisation.

Several small and wirelessly networked sensors distributed across the landscape will measure light levels, temperature, humidity, soil moisture, and eventually also carbon dioxide spikes and lightning strikes. This environmental data can be added to the existing suite of information available to fire managers to help them assess fire risk. The sensors can be used to monitor the drying of a landscape over time, and can also provide an early warning of sudden changes in the landscape that may indicate a lightning strike or other fire trigger.

Working with ACT Parks and Recreation, the third of the pilot sensor networks is being installed at Black Mountain. It will complement networks installed at TERN’s Whroo and Tumbarumba supersites. Once fully evaluated, AusCover and OzFlux plan to install additional networks at other TERN SuperSites across the country, enabling testing and comparison of the technology in different environments.

Dr Alex Held will speak about AusCover’s role in enabling better management of fire at the upcoming TERN briefing session ‘Science of extreme events’ in Canberra on 10 February.

Just received this photo from a firey deployed to the #Grampians last week. Scary stuff. Firefighters are very brave! pic.twitter.com/ZrvJ7eM2Rf

This is what is sitting above Stawell at the moment. Really eerie.. pic.twitter.com/aXsnV73W0a