The online database of the Australian Ecological Knowledge and Observation System (ÆKOS) is breaking new ground by making data available in new ways and combinations so that we can understand nature in ways that haven’t been possible before. What are these challenges in better understanding nature that we face as Australian individuals, institutions and businesses, and how can the data in ÆKOS help to tackle them?

Australian ecologists have already published a list of the 22 big ecological questions inhibiting effective natural resource policy and management in Australia. The questions relate directly to nature and its workings, and cover such topics as the changes that occur in nature when used by humans (called socio-ecological or ‘human and ecological’ systems), as well as climate change, species’ habitats, invasive species, fire patterns and water use. ÆKOS is fine-tuning the behind-the-scenes work needed to make the datasets available for researchers to tackle these questions.

Professor Andrew Lowe, from the University of Adelaide’s Environment Institute, is associate science director of the Terrestrial Ecosystem Research Network (TERN). He said ÆKOS addresses one of those big challenges.

‘One of the major challenges listed is about having integrated data infrastructure that supports the baseline science that is required for natural resource policy and management,’ Andy says.

‘When rich ecological data about nature isn’t available to underpin knowledge, then biodiversity policy and management is based on best-guess decisions. ÆKOS breaks new ground by enabling datasets – existing and new – to be gathered and described in fundamental detail for better online access. Scientists will soon be able to analyse and report on trends and critical thresholds, and give feedback to management in ways not previously possible.’

ÆKOS will use several strategies to make data available in new ways. One is through describing and storing existing and new data being collected by research organisations, including TERN’s Multi-Scale Plot Network (MSPN). The Director of MSPN, Associate Professor Nikki Thurgate, said that, by storing their data in the ÆKOS database scientists would be able to access the specific data they needed to help answer many questions about Australia’s nature and its management.

‘We could study where Australia’s plants, animals, micro-organisms and their habitats occur, and where they are missing in the landscape. We’ll be able to count the numbers of species in their habitats, identify how different species move through landscapes, and identify what features of their habitats affect their numbers and movements,’ Nikki says.

‘We could also study how to assess the outcomes of current management actions, and establish if they secure Australia’s nature assets for generations to come.’

A second strategy is to source the huge volumes of systematically collected ecological data that have been collected by government agencies, universities and CSIRO for publication via the ÆKOS web portal.

One of the datasets that will be accessible is the Ravensthorpe Range Flora Survey which has been contributed by the Department for Environment and Conservation in Western Australia. The Ravensthorpe Range is in the south-western corner of the state, south of the Great Western Woodland (which is part of the Australian Supersite Network). The range runs for about 50 km in a north-west–south-east direction from Mount Short (14 km NNW of Ravensthorpe) to Bandalup Hill (34 km ESE of Ravensthorpe) and, at its southernmost part, is approximately 25 km from the coast. It is an ancient range with complex geology including greenstone and banded ironstone, and is very likely to be tested for mining.

The survey dataset is a good example of a regional scale dataset. Two hundred permanent quadrats (sampling units) were established to cover the geomorphological, geological and floristic variation across the range. Data were collected on topography, landform element and type, land surface (disturbance, course fragments, rock outcrop, percentage leaf litter, and percentage bare ground), soil (profile and field texture), structural complexity for three strata (lower, mid and tall) and the presence of dominant plant species. Four photographs, one from each corner, were taken for each quadrat.

The original purpose of the survey was to document the conservation values of the Ravensthorpe Range and provide a regional context for assessing proposed developments, especially mining. However, these data could be reused for a number of studies, especially those requiring floristic data from altitudinal and latitudinal gradients.

Dr Margaret Byrne, the Director of the department’s science division, said the department was supportive of publishing its datasets in ÆKOS because it gave Australia’s ecosystem science researchers an opportunity to add value to the government’s investment.

‘The information framework adopted by ÆKOS fills a gap in our department as it allows data users to fully appreciate the richness of the flora of Ravensthorpe Range, and describes our collection methods, which is important as it helps to reduces potential misuse of our data,’ Margaret says.

These data will be accessible via ÆKOS in December. For more information, contact Dr Anita Smyth, Data Facilitator, Eco-informatics, by email or phone on (08) 8313 1270. 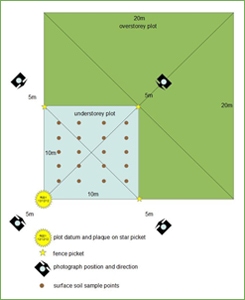 Quadrat design for sampling at Ravensthorpe. All the information collected for each of the 200 quadrats is stored in ÆKOS. (Images courtesy of WA Department of Environment and Conservation) 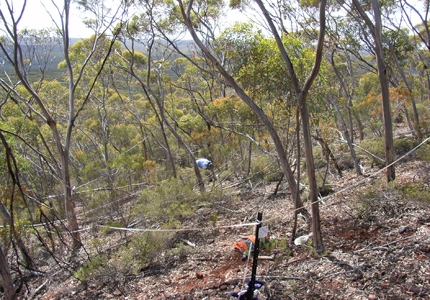 One of four images taken of vegetation in a quadrat stored in ÆKOS for the Ravensthorpe Survey (Photo © Stephen Kern & Rosemary Jasper, Western Botanical)