Agriculture, forestry, tourism and wildlife under TERN microscope in the west

For nearly a decade, Western Australia has enjoyed one of the most spectacular resources booms in the country’s history. In such a context it might seem difficult to argue that collaborative ecosystem science infrastructure, such as that being delivered through TERN, could make a significant contribution to the economy. However, the benefits of TERN’s strategic investments here are long-term, and will continue to be reaped by the state’s remote and regional communities long after the gas and iron ore is gone.

Providing local stakeholders with the capacity to detect, understand and manage change in the ecosystems on which they depend has been a strong focus. Thanks to extensive local support, TERN has successfully established a dense network of field-monitoring sites and observatories across south-west Western Australia, a region that has been simultaneously identified as a global biodiversity hotspot, as highly vulnerable to climate change, and as highly valuable for local agricultural, forestry and tourism industries.

WA’s Department of Parks and Wildlife (WADPW, formerly DEC) understandably has considerable interest in the transitional nature of ecosystem services in parts of this region, both due to climate change and changes in human uses of the services ecosystems provide us, from traditional sheep farming to increased beef production, as well as mining.

Departmental staff trained in TERN’s AusPlots Rangelands survey methods have recently begun to establish long-term monitoring plots that aim to detect change in complex shrublands in the region. Once they’re done locally, they plan to deploy the same method next year in the Pilbara. Along with the data generated by colleagues from other states, these will be contributing to regional-, state- and continent-wide capacity to assess condition and trends in rangeland ecosystems.

In recognition of the importance of south-west WA’s tall eucalypt forests, TERN’s AusPlots Forests team has established a suite of long-term monitoring plots there. Dr Sam Wood from the University of Tasmania explained that this has been done hand in glove with local stakeholders.

‘It’s important that this national forest monitoring infrastructure provides useful information for local and regional resource managers into the future, so it’s a no-brainer that wherever possible we have located our plots with existing plot infrastructure, so that all previous historical and scientific data can be used,’ he says.

New remote-sensing data for the region – it is being made freely available through the Western Australian node of TERN’s AusCoverfacility, based at Curtin University – was also considered during site selection. 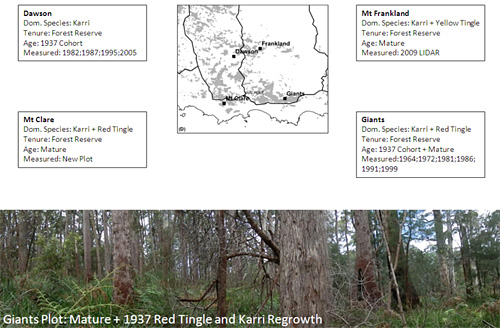 One hundred and ten kilometres north of Kalgoorlie is the Great Western Woodlands Supersite, a member of TERN’s Australian Supersite Network. It is located in the largest-remaining piece (16 million ha) of Mediterranean woodlands on the planet. Through their activities at the supersite, researchers aim to understand the impacts of climate change and management on the fundamental flows of energy, carbon, water and nutrient stocks, and on biodiversity, in semi-arid woodland ecosystems regionally, nationally and globally. Since around August 2010, researchers from at least 17 organisations have worked on at least 21 major projects at the supersite. To ensure the research results have regional benefits, the supersite works collaboratively with local groups such as Gondwana Link  and the Goldfields Land and Sea Council.

Linking all of this diverse ecosystem monitoring capability and infrastructure is the South-Western Australian Transitional Transect (SWATT), a 1,200 km long subcontinental transect that runs from Walpole on the south coast to just beyond the former pastoral lease of Lorna Glen and into the Little Sandy Desert. Once fully implemented, this infrastructure will enable researchers to gain insights into the current and likely impacts of climate variability on regional ecosystems. The SWATT is a new collaborative initiative of TERN’s Australian Transect Network (ATN) and WADPW – so new, says the Director of the ATN, Mr Stefan Caddy-Retalic, that the first plots are being surveyed now in one of the least-known parts of the region, the deep yellow sand heathlands. 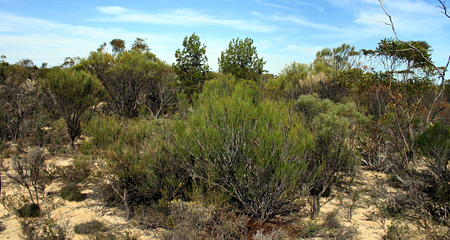 Heathlands in the SWATT area

‘We know so little about this system that we’re expecting to find quite a few species new to science,’ says Stefan. ‘Without the infrastructure and support provided by TERN, ATN and WADPW wouldn’t be able to do this work.’

With TERN’s infrastructure, researchers can apply numerous approaches to tackle challenges in the region.

One of them is the protracted period of drought and reduced rainfall experienced there since the mid-1970s. For example, Dr Brad Evans of Macquarie University recently investigated the possible causes of the severe tree-death events that occurred in the northern jarrah forest of south-west Western Australia in 2010–2012. Integral to the study were remotely sensed data for the region, made available through TERN’s AusCover facility, and the ecosystem modelling capability provided through TERN’s e-MAST facility. Notably, the tree death events provided abundant fuel for a series of out-of-control forest fires in 2010–2011 that resulted in over 100 homes being destroyed or damaged. Synthesising multidisciplinary datasets, Brad and his co-author found that seasonal temperature extremes are expanding in the region – the coolest months are getting colder, and the warmest months are getting hotter.

‘As the region’s climate continues to become drier and warmer, we need to be able to predict how our native forests are going to respond,’ Brad says.

‘The multidisciplinary datasets now becoming available through TERN are vital if we researchers are to improve our understanding of the impacts of climate variability on regional ecosystems such as forests. This is a necessary first step towards being able to manage those impacts.’