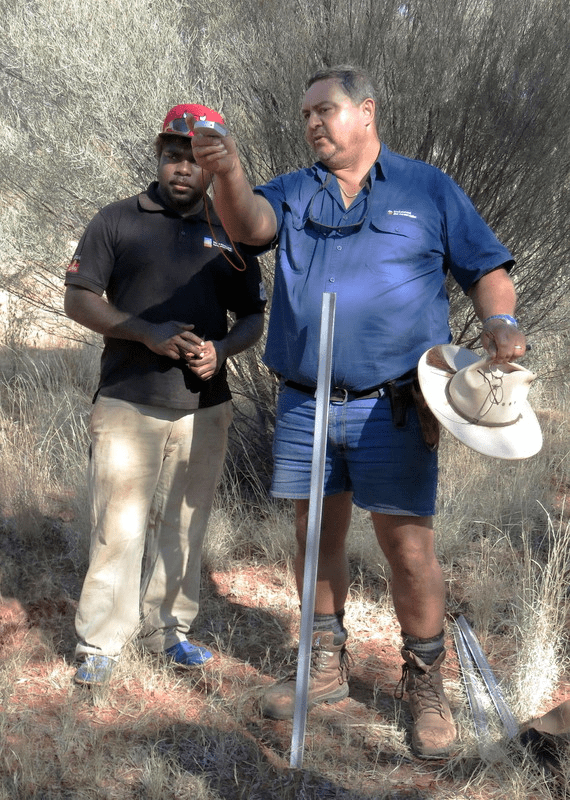 Stephen van Leeuwen (right) explaining to Birriliburu Ranger Zareth Long (left) how to establish the preliminary boundary of an AusPlot plot using a compass in a mulga shrubland at Katjarra in the Birriliburu IPA in the Little Sandy Desert bioregion, May 2014 (Photo courtesy of Allan Burbidge, WA Parks and Wildlife)

Pretty much smack bang in the middle of Western Australia, over 1000 kilometres north-east of Perth, is the Birriliburu Indigenous Protected Area (IPA). At over 6 million hectares in size (about the same area as Sri Lanka, and slightly smaller than Tasmania) Birriliburu covers three geographically distinct bioregions – the Little Sandy Desert, Gibson Desert and the Gascoyne – and is home to a number of nationally important ecosystems.

These diverse landscapes belong to the Birriliburu native title holders whose connection with country has been woven over 30,000 years and continues to this day. To manage their natural assets, the Birriliburu people have included in their IPA a plan of management that guides a new team of Indigenous rangers who are already working on the ground, controlling feral animals and weeds and using traditional fire management techniques to protect biodiversity and reduce pressure on threatened species.

A new collaborative project by TERN and its partners is further strengthening the management capacity of the Birriliburu Indigenous rangers though knowledge exchange and skills training.

TERN’s AusPlots facility is working with the traditional owners and rangers, in collaboration with the Western Australian Department of Parks and Wildlife and the Central Desert Native Title Services, to share ideas on how best to monitor and manage the area’s diverse ecosystems.

The combined AusPlots and WA Parks and Wildlife team has been sharing the AusPlots rangelands survey methodology with the Indigenous rangers, presenting it as a supplementary way of monitoring the land and documenting fauna and flora.

The director of AusPlots, Ben Sparrow, says: ‘The AusPlots method was a great fit for what the Birriliburu rangers were looking for. It’s quick to learn and set-up, and because it’s already set-up as a nationally consistent way of monitoring rangeland ecosystems it means that the data they collect can enable comparable monitoring of vegetation across their IPA.’

The project aims to support the collaborative transfer of Birriliburu knowledge and contemporary science between the partners. The project has already enabled the Women’s Ranger Team to help establish three new monitoring plots. The rangers will use the plots to identify, monitor and protect habitats across the Birriliburu IPA by collecting data on species diversity, condition and change over time.

At one of these plots at Katjarra (the local name for the Carnarvon Range) the Birriliburu ranger teams, together with staff of WA’s Parks and Wildlife, have catalogued over 500 vegetation species and lodged the information with the Western Australian Herbarium.

Stephen van Leeuwen of WA’s Parks and Wildlife is part of the team. He has already spent a significant amount of time training the Birriliburu rangers in the AusPlots methodology.

‘Working with the Birriliburu men’s and women’s ranger teams has been a fantastic experience for me and my colleagues,’ says Stephen.

‘Having the opportunity to share knowledge and methods of land monitoring and management has been extremely rewarding. We have learnt about the Birriliburu’s immense knowledge of country and how and where plants fit into this. One example of this was when one of the Women’s Ranger Team told us how many varieties of mulga were present at a monitoring site even before we’d started sampling. We counted and it turns out she was spot on!’

Eventually the rangers hope to establish a comprehensive record of animals at the sites; it can be used as a basis for input into Cyber Tracker, a free tool to record field observations and data using a smartphone or tablet.

The Women’s Ranger Team, with the help of Bush Heritage Australia, has also started a project to record traditional names and uses for bush tucker and medicine plants that are found in Birriliburu and Wiluna country. 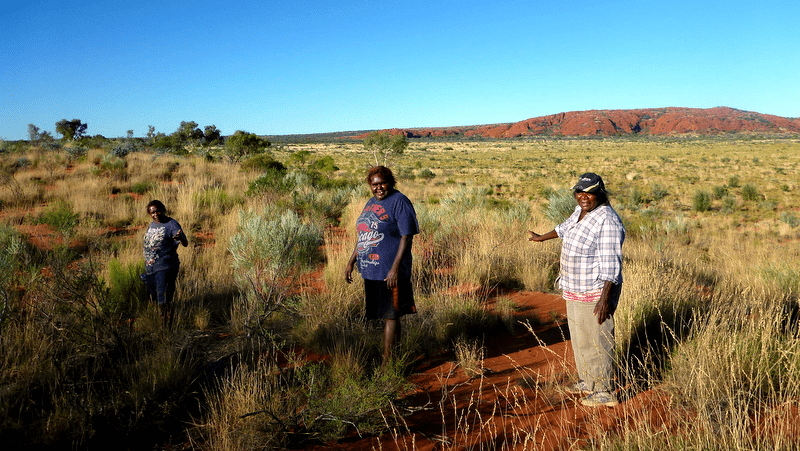 Ian Fox, the director of TERN’s Australian Transect Network, is looking to emulate the success of the work with the Birriliburu rangers: he is exploring the possibilities of working with indigenous Australians at TERN monitoring sites in the Nullarbor Plain and Great Victoria Desert regions.

‘It would be fantastic if we could establish similar training programs at other TERN monitoring sites,’ says Ian. ‘We have made some tentative steps towards establishing relationships with local NRM and IPA groups, and are excited at the prospect of furthering our collaborations. This September we worked with rangers at Tjuntjuntjara in the Great Victoria Desert in what we hope is just the start of a productive relationship with local ranger groups.’

Liam Mulcahy of Spinifex, who works with the rangers of Tjuntjuntjara, a large Aboriginal community located in the Great Victoria Desert region of eastern WA, echoes Ian’s anticipation of further collaboration with the Transects and AusPlots team. ‘The rangers enjoyed working with the [TERN] team and agreed that it was beneficial to learn about the study especially as these plots will be returned to in the future,’ says Liam.

From all accounts it seems like our budding work with indigenous land management groups is already having positive outcomes and we hope to be able to report on further collaborations and knowledge sharing in future TERN newsletters.

Data from the Birriliburu monitoring sites will be available free via TERN Eco-informatics’ AEKOS data portal soon. In the meantime, why not explore the data available from approximately 200 other AusPlots sites around Australia via AEKOS.

A map of AusPlots monitoring sites and the approximate locations of Birriliburu IPA (red polygon) and Tjuntjuntjara (red marker).  Orange dots mark the locations of AusPlots sites where collaborations have been established.