What will happen to Kakadu’s wetlands under projected sea level rise? How will they cope with the increased saltwater intrusion?  TERN’s Australian Coastal Ecosystem Facility (ACEF) is supporting a project which is being led by the CSIRO as part of the Northern Australia hub of the Australian Government’s National Environmental Research Program (NERP) to help answer these questions.

ACEF has recently acquired high spatial resolution satellite imagery of Kakadu National Park in the Northern Territory, which are being used by CSIRO as part of a NERP Project to develop detailed vegetation maps. Researchers combine multiple sources of satellite and airborne imagery, including ground observations such as reflected light, texture and elevation, to identify vegetation communities on the flood plains.

These flood plain vegetation maps can then be combined with results from sea level rise models enabling the team to work out which areas of Kakadu are most vulnerable to saltwater inundation and salinisation. Knowing which areas are most at risk at different time frames in the future will help Traditional Owners and park managers respond to these changes.

Additionally NERP researchers from Charles Darwin University will also use the vegetation maps as an important input to help predict the spread and impact of wetland weeds, currently the major threat to Kakadu’s floodplains. Saltwater inundation and weed invasion could reduce floodplain nesting and feeding habitats for magpie geese, and other important bush tucker places.

ACEF’s Coastal Data Portal contains a number of datasets relevant to northern Australia, including the Federal Government’s Directory of Important Wetlands and Australian Protected Areas, which map the extent of Kakadu NP and its wetlands. 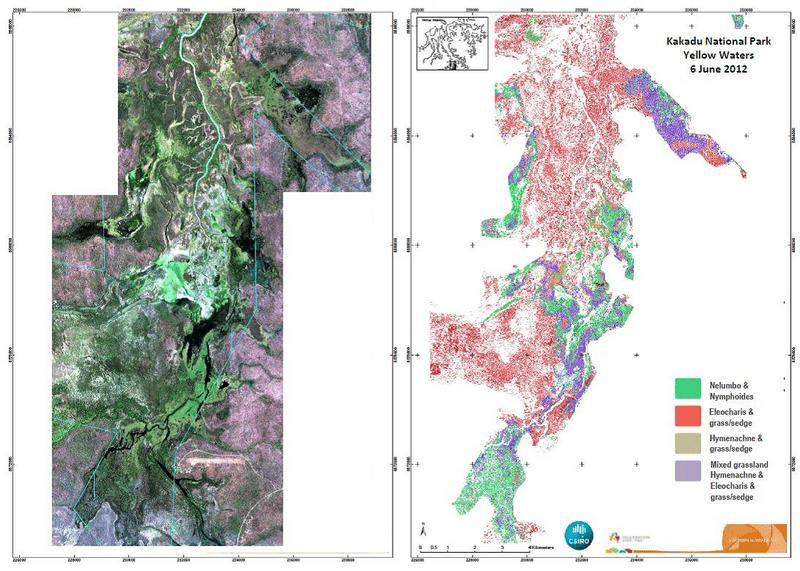