TERN has partnered with CSIRO, Ngadju Conservation, Goldfields Land and Sea Council and WA Department of Parks and Wildlife to produce a new fire management report that challenges common beliefs about Aboriginal burning practices in Australia.

Contrary to the common assumption that Aboriginal burning was widespread and frequent, the report, initated by Les Schultz of Ngadju Conservation, shows that the Ngadju community from south-western Australia were highly selective in where they burnt their country.

‘Ngadju used fire as a cultural tool for looking after rockholes and grassy areas; for protecting important cultural sites and special plants such as water trees; for access and hunting; and for encouraging grasses. The old growth woodlands were rarely burnt deliberately’, says Les.

Some of the report’s key findings are:

Ngadju country is of particular significance as it covers a large part of the 16 million ha Great Western Woodlands, the largest remaining area of intact Mediterranean-climate woodland on Earth. The area is globally unique in that nowhere else do tall woodlands occur at as little as 250 mm mean annual rainfall, making fire management in the region important and challenging.

Another significant outcome of the report is that the documented knowledge will enhance Ngadju opportunities to be connected to and to work on country, informing the ecological management of the Great Western Woodlands. The report documents Ngadju’s understanding of local ecosystems and fire regimes, and highlights how they would like to contribute to contemporary fire management in the region.

At the launch of the report Les said ‘Today is a milestone for traditional and contemporary healthy country action planning in Ngadju country. Our aim is that our children can come out of school and train as fire and biodiversity experts on their own country. We welcome and thank our partners for many years of contribution towards Ngadju empowerment.’

Ngadju participating in a fire training day at Buldania Rocks. Above, Les Schultz (at right) tells us that this fire is too high and will kill the wattles. Below, litter is being scraped away around individual trees so the fire doesn’t kill them (Photos courtesy of S Prober, CSIRO). 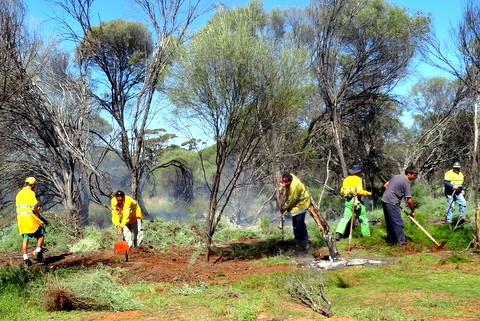