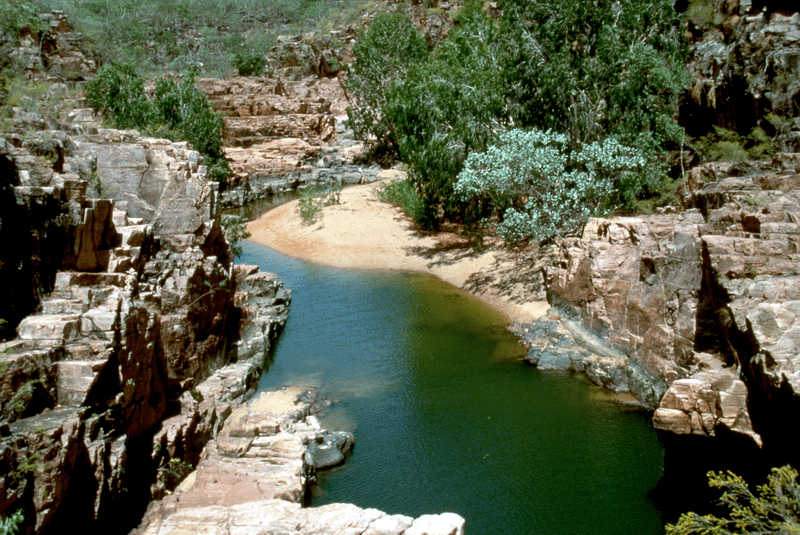 The research team is starting to understand how carbon moves from vegetation into soils, then into the groundwater as carbonic acid, and from there into rivers, like this one in the savanna region of the Northern Territory (photo courtesy of CSIRO)

Did you know that the groundwater in northern Australia can be highly acidic, compared to that of the southern part of our continent? What is this caused by, and how might it affect the long-term sustainability of land uses such as grazing, agriculture or mining? A multidisciplinary team of researchers is planning to use the infrastructure provided through TERN’s OzFlux Facility to investigate – for the first time – a theory that this acidic groundwater is caused by carbon leaking from terrestrial ecosystems after seasonal pulses of productivity in the tropics.

Back in the 1980s, hydrogeologists reported highly acid groundwater in Top End catchments – sometimes as low as pH 4.5. They speculated that this was caused by leaching of soil water supersaturated with carbon dioxide, due to high rates of root respiration in the wet season. A similar phenomenon has been observed in Amazonia, where researchers have connected acidic groundwater with measurements indicating that 77% of all the carbon exported from tropical forests to groundwater and rivers came from terrestrially-respired carbon dioxide that was dissolved within soils.

“By comparing data from two northern Australian sites with very different rainfall and soil profiles – Howard Springs and Daly River – we can start to understand the pathways by which carbon can move from vegetation into soils, then into the groundwater as carbonic acid, and from there into rivers,” said Dr Lindsay Hutley of Charles Darwin University.

“This so-called fluvial export of carbon could be a much more important feature for northern Australian ecosystems than previously thought,” added Lindsay. “As such there could be important consequences for all kinds of land use and development projects. As a simple example, northern Australia’s groundwater acidity first came to light in the 1980s when engineers found that their bore casings were corroding at much faster rates than normal.”

The project, which is the subject of a funding proposal currently being submitted to the Australian Research Council, also intends to use TERN infrastructure to look at what actually happens to fluvial export of carbon when tropical savannas are cleared for pasture. “Does carbon export increase or decrease? What might the consequences be for groundwater acidity?” asked Lindsay. “We need to know the answers to inform sensible policy decisions about development in northern Australia.”

Some of the datasets the team will be using are already available for public viewing and download via TERN’s Data Discovery Portal under the standard OzFlux licence (which includes assistance if required!).