Sandplains of the south-west to reveal their treasures

As summer sets in in south-western Western Australia, field work along the South West Australian Transitional Transect (SWATT) will wind up.

Next step: sorting and identifying the plants collected during the survey. SWATT, which in part traverses heath and shrub vegetation on the deep sandplains of southern WA, is the newest transect in the Australian Transect Network.

What the scientists find will feed into the WA Department of Parks and Wildlife’s knowledge about the state’s rich heathland (kwongan) flora.

This is no small thing, says the SWATT Research Scientist, Dr Rachel Meissner.

‘The area has a mosaic pattern of geology, which means that the landscape supports many kinds of vegetation communities that change quite quickly over short distances. For example, a species that occurs in the lee of one sand dune might be replaced by another on the next dune. Each may occur in only that one place.

‘We’ve theorised what changes we’re likely to see along the transect. The survey will give us the data to support or modify this general idea.’

ATN Director Mr Stefan Caddy-Retalic says the ATN’s work will help ecologists and land managers understand the diversity in sandplain ecology, and how it works. Their knowledge would feed into decisions on how to manage the area for economic and environmental sustainability.

‘The initial surveys will give us a baseline, so we can monitor changes, whether they be induced by climate, fire, human use, or – most likely – all three,’ Stefan says.

‘How to manage fires is pretty important. Most of the plant species here have developed one of two strategies for dealing with fire: resprouting, where a burnt plant sprouts again from its roots or remaining trunk; and obligate seeding, where the plant dies, but its seeds, which are protected in the soil or by hard capsules, germinate after fire. We need to understand much more about how this works, for example what kinds of fires favour which strategy, and how people and our management practices  influence the composition of the diverse sandplain vegetation. All this is important because plants’ survival strategies have an impact on how communities recover from fire and other disturbances.’

The SWATT extends about 1,000 km, from Walpole on the southern coast, more or less north-east into the Little Sandy Desert. It takes in the Great Western Woodland, and Credo station, where OzFlux operates a flux tower. The composition of the sand in the plots changes, from white in the south, to yellow, to red in the north. The sandplain vegetation is characterised by heathlands (typically Allocasuarina, Acacia and Eucalyptus species) and shrublands, although hummock grassland dominates in the desert. The transect cuts through six IBRA bioregions: Jarrah Forest, Esperance Plains, Mallee, Avon Wheatbelt, Coolgardie, and Murchison.

The surveying and monitoring sites have been established using a methodology based on the AusPlots protocol, and includes a number of extra measures to align with WA government monitoring programs. When complete, the SWATT will comprise 40 sites, many of which are on conservation estates.  So far, 32 have been surveyed since work began in March. 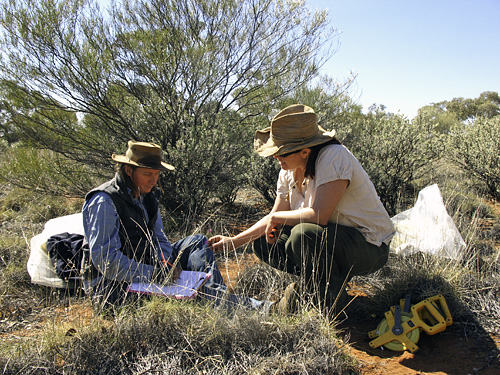 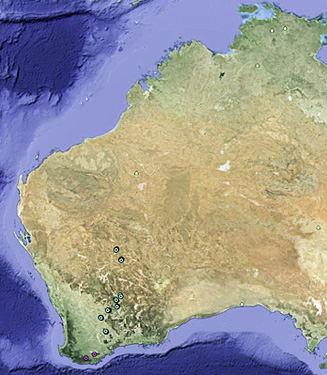 The SWATT comprises 40 one hectare plots in 10 localities. Eight localities (blue) have been surveyed so far, and two more (pink) at the southern end of the transect will be completed this year.