Savanna burning to save carbon emissions 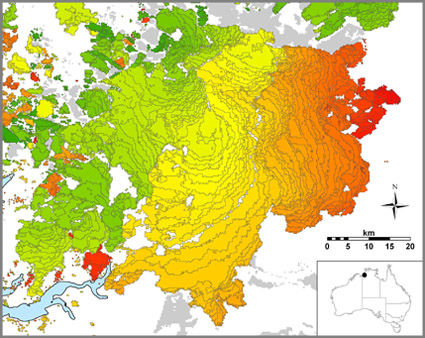 Example of burnt-area map for northern Australia made using MODIS data.
The different colours indicate different days between 1 June and 15 September 2008, and grey the areas burnt between 1 January and 31 May 2008.

The first savanna-burning project was approved early this month under the federal government’s Carbon Farming Initiative (CFI). This is big news for Australia in our efforts to manage carbon emissions, but one thing the headlines didn’t capture is the key role that TERN’s AusCover facility is playing in this new project.

Fish River Station, about 200 km south of Darwin, is the location of the hallmark project. The property is held in joint trust and operated by the Indigenous Land Corporation, Greening Australia and The Nature Conservancy. Up to 70% of the 1800 km2 property burns each year in uncontrolled fires. Under the CFI project, Indigenous landholders will intentionally burn grasslands early in the dry season to reduce fuel loads which, in turn, will reduce the severity of late-season fires and result in fewer carbon emissions.

It is estimated that the project could generate up to 20,000 Australian carbon credit units each year. In order to determine the precise number of credits, a method is needed to determine the emissions from savanna fires – and that is where AusCover comes in.

By using satellite imagery of the region, AusCover can determine the area and intensity of fires that occur. Dr Stefan Maier, the Principal Research Fellow in Remote Sensing at Charles Darwin University, is one of the researchers who has been working on this project.

‘We use the data from MODIS [the Moderate Resolution Imaging Spectroradiometer] to generate maps of burned areas,’ Stefan says.

Investment in field calibration and validation of remote sensing data by AusCover and partners means the maps can be used with a high degree of confidence to determine carbon emissions resulting from fire.

‘We have been monitoring and mapping fires in the Northern Territory for over 15 years, so we can use this information as a baseline,’ Stefan says.

Once the Fish River savanna-burning project commences, AusCover’s existing data on baseline burned area will be used to determine the change in carbon emissions arising from the altered fire regime. Ultimately, this will allow carbon credits to be measured and allocated to the project under the CFI. The advanced capability to monitor and measure the extent of fire is just one of the new possibilities for fire monitoring that have arisen as a result of TERN.

As Stefan says: ‘The processing infrastructure established through TERN has made this possible. Without the TERN infrastructure, we couldn’t provide this data.’