TERN was recognised by those attending the symposium as already contributing to a better understanding of ecosystems, but they believed that it needs to fill some gaps immediately and to market its successes and its capacity in order to gain wider awareness and generate public support.

Attendees split into nine groups in a workshop session, ‘TERN and you’, to discuss ways to answer some of the questions that had been raised during the meeting.

While participants believed that TERN is greater than the sum of its parts, they acknowledged that others don’t recognise this yet. By demonstrating its work better, TERN would help reconcile partners’ optimism of the value of the network against pessimism about future funding. It was reinforced that TERN should be marketed as an authoritative, one-stop shop – supported by state-of-the-art data management, access, security, guidance and support – for data and information on Australia’s terrestrial and freshwater ecosystems. To back up this claim, the network needs to measure the work it does, quantitatively and qualitatively, and market its success in affecting:

If TERN is to broaden its investment base and expand its stakeholder network, it needs to understand its stakeholders better. One way of immediately demonstrating this is to implement two-way communication with stakeholders, and based on this, to anticipate investors’ and stakeholders’ needs by pre-packaging communications and products (e.g. policy-relevant material) to substantiate their interest and encourage their long-term involvement. Other aspects of this strategy include:

But first, TERN first has to acknowledge, and transfigure, some of the weaknesses in the network. For example, data collection and synthesis activities need to be better integrated, in light of understanding the services ecosystems provide Australians and how these will be modified by environmental change. ACEAS could play a strategic role in helping TERN facilities to engage and work with others to fill gaps in data and knowledge. At one end of a continuum, this would include other institutions such as the Atlas of Living Australia to provide a more comprehensive spread of species-level information; and at the other, private landholders and Aboriginal and Torres Strait Islander land managers, to provide a detailed picture of how land is actually used.

Achieving this would help TERN develop more reliable modelling of the composition of ecosystems and the threats and opportunities environmental change might pose. 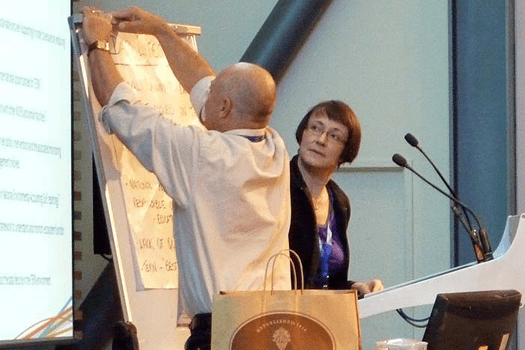 Reporting back to the plenary session (Photo courtesy of Angela Gackle)

The groups noted several accomplishments from which the network can leverage further achievements. TERN is starting to demonstrate that it has an important role in informing discussions in the Australian policy and environmental landscapes. It can be a constructive presence in the national policy debate by providing  data and information products for government and others that is validated, transparent, discoverable and accessible. To be able to adapt to evolving policy debates, though, the infrastructure that TERN represents needs to be flexible. TERN is also able to offer an advisory function, such as recommending appropriate monitoring techniques (e.g. indicators) to assist policy-makers. The network can begin to display its collective worth to Australian society by contributing to two new initiatives:

The network can relatively easily contribute to environmental accounting and reporting being conducted at commonwealth, state and regional levels. By contributing to the identification and development of new metrics, baselines, and useful ‘surrogates’, it has the ability to produce metrics that will operate consistently in the long term (i.e. with emerging technologies). TERN can articulate and champion the role of citizen science in environmental reporting, and help regional and natural resource management (NRM) groups access important datasets and tools for developing their reports.

Because TERN’s role is to understand and describe patterns and data, and because it has the ability to bridge the divides that occur when agencies and institutions investigate difficult science questions without reference to each other, the network is in a good position to contribute to, and perhaps lead, the development of a framework for understanding how ecosystems function. The framework would focus on systems rather than the components of ecosystems, and take a dynamic, rather than equilibrium, view of the world. It would operate at different scales to help us understand the roles of organisms and their impact on the carbon cycle.

The problems of data management and collaborative research that the TERN facilities have solved means the network is one of the best mechanisms available in Australia to lead the development of a national code for the responsible conduct of research.

TERN is also in a good position to build an unassailable international reputation, particularly in: