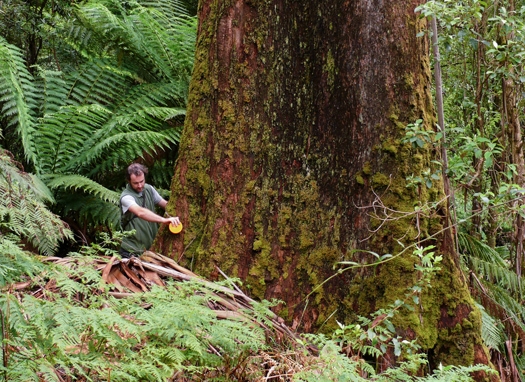 As we move towards a global economy that takes account of carbon, it is essential that we increase our knowledge about the value and dynamics of the carbon stocks stored in Australia’s modified and unmodified landscapes.

However, increasing our understanding of carbon stocks and dynamics in ecosystems requires long-term and very detailed information on vegetation structure, composition, decay and other attributes of ecosystems. Such information can only be obtained by repeatedly measuring established plots over long periods of time. This is what part of the Long-Term Ecological Research Network (LTERN) is doing. By establishing standards for data collection and a network of plots in different landscapes, LTERN, a subfacility of the Multi-Scale Plot Network, provides the collection infrastructure to gather high-quality ecological data robustly. Good data enables good science and good management– and LTERN is a global leader in this area for Australia.

LTERN’s formation in 2012 brought together a number of well-established plot networks. New raw plot data and metadata of pre-LTERN data will be stored and published via the Australian Ecological Knowledge and Observation System (ÆKOS), a web data portal being built by the Eco-informatics facility based at the University of Adelaide. The portal is unique worldwide as it specialises in bringing together sophisticated ecological data at the plot level from all over Australia. Datasets are secured for a lifetime as they are published under copyright, with attribution and acknowledgement to data owners from governments, universities and the private sector. Part of LTERN’s work is to see the datasets better used, by publishing its data to increase collaborations to create new science, refine old science and expand knowledge about natural resource management for years to come.

One of LTERN’s founding members, Professor David Lindenmayer, from the Australian National University, established long-term monitoring plots in the tall eucalypt forests of the Southern Highlands of Victoria in 1983. Thanks to the persistence of this research effort, he and his colleagues now possess nearly 30 years of forest observations – involving measurements of in excess of 40 different variables including tree height, tree diameter, leaf litter, humus depth in the soil, and piping in trees – that can be used to inform policy about the implications of different ways of managing carbon cycles and carbon sequestration. Because they come from field observations they can also be used to make definitive statements about the impacts of disturbances such as the 2009 wildfires on forest carbon stocks.

The impacts of fire on landscape carbon stocks are also the subject of research in another LTERN component, the Three Parks Savanna Fire-Effects Plot Network, which has been running since 1994 on 220 monitoring plots established in three major Top End conservation reserves, Kakadu, Litchfield and Nitmiluk national parks. This plot network is led by Dr Jeremy Russell-Smith. Tropical savannas play a prominent role in the global carbon cycle, contributing around 30% of the world’s terrestrial net primary production (the carbon dioxide plants take in during photosynthesis, minus the amount they release during respiration). The very high frequency of fire in tropical savannas, during which much of the captured carbon is quickly released back to the atmosphere, means that these ecosystems are not considered to sequester and store much carbon compared with others, such as tropical forests. However, experimental reductions in fire frequency elsewhere in the tropics have been demonstrated to lead to substantial increases in savanna woody biomass, and hence carbon storage.

Is there a fire management strategy that could increase the carbon storage capacity of Australia’s extensive tropical savannas? Dr Brett Murphy’s analyses of Three Parks data indicate that this may be feasible. Results suggest that a fire-management strategy that reduced intense fires late in the dry season – such as is currently being achieved by the 28,000 km2 West Arnhem Land Fire Abatement Project – may increase carbon storage in woody biomass by about 6.1 tonnes of carbon per hectare over the next century; this is equivalent to an annual carbon offset of 528,000 tonnes of carbon dioxide-equivalent per hectare. (Carbon dioxide equivalence is a way of using one unit of measurement to express the effect of the different greenhouse gases, so they are more easily compared.) Assuming a carbon price of $23 per tonne, this would amount to an additional $12 million worth of carbon stored annually – and this is due to improvements in fire management in the WALFA project area alone.

This research, along with other LTERN research, will feature in a forthcoming book from TERN’s Multi-Scale Plot Network on monitoring environmental change. The book will be published by CSIRO in early 2013, and aims to be a data-rich book that demonstrates the value and integration of existing national long-term ecological research in Australia for monitoring environmental change and informing natural resource management. Contact the coordinator of LTERN, Dr Emma Burns, for more information about this publication.