TERN’s Australian Centre for Ecological Analysis and Synthesis (ACEAS) has a proud history of involvement in science education. Since its establishment in 2009, 81 tertiary students have been contributing members of its 37 working groups.

In fact, ACEAS is so passionate about capacity strengthening and mentoring that it requires working groups to include students. Moreover, ACEAS is involved with university students at all stages of their studies.

Nowhere is inclusive student involvement in ACEAS more clear than in the Australian aerobiology working group led by Dr Janet Davies of the University of Queensland. The group is collating and analysing historical published data and unpublished pollen-count data from regions of Australia, New Zealand and France to help answer a number of questions. Firstly, they want to understand phenological patterns, land-cover changes and pollen aerobiology; secondly, to gain insights into how the grass-pollen season is driven by current meteorology, and thus future climates. And, finally, they hope to establish a national pollen-count monitoring program to assist those who suffer from allergic respiratory disorders such as hay fever and asthma. 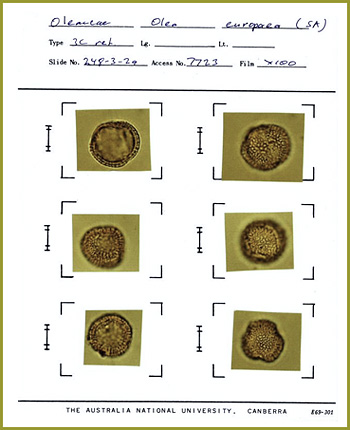 Olive pollen (such as this Olea europaea) is now one of the most common causes of hay fever in Adelaide. (Image courtesy of the Australasian Pollen and Spore Atlas)

The group is nothing to sneeze at and brings together a transdisciplinary team of scientists and clinicians with expertise in ecology, botany, archaeology, climate-change science, plant genetics, allergy, immunology, public health and biostatistics. Included in this dream team are three students: an undergraduate, a PhD student and a post-doctoral student.

Undergraduate Danielle Medek has just finished studying medicine at the Australian National University in Canberra. This is the first ACEAS working group that she has participated in, and she sees her involvement as highly beneficial on many levels.

‘ACEAS is unique in its design and ability to target the priorities of a diverse number of fields. Being involved in the working group has taught me a great deal about how to interact and communicate with scientists across disciplines,’ Danielle says.

Being able to work collaboratively with other students and researchers is not only great for aiding knowledge generation, it is also a great outlet for personal development. Students are able to work side by side with some of the leading scientists in their areas of study, creating a unique environment which is extremely motivating and exciting for participants.

Dr Bradley Campbell, who is engaged in post-doctoral training at the University of Queensland, said there were also academia-related benefits for students involved in ACEAS working groups via the publications that often result from the collaborative work.

‘The benefits were quite clear from the first workshop, as a number of potential publications quickly materialised,’ Bradley says.

‘Publications are important to students and young researchers getting started. These days, to get ahead in science, you need to be involved with as many publications as possible.’

Another great thing about ACEAS is that they are involved in synthesis work on many aspects of ecosystem science, which means the opportunities for students of all fields are vast. Don Vicendese is currently doing his PhD at La Trobe University in Melbourne. He recently contributed to the Australian aerobiology working group because of his data-modelling skills.

‘As a numbers man who is usually surrounded by other modellers, being able to spend a week collaborating with such a diverse group of people was fantastic! Hearing alternative opinions and reaffirming and refining my own skills was such an instructive experience,’ says Don.

Don says that his involvement in ACEAS has been extremely positive, and he encourages other students to get involved. By continuing to offer such great opportunities to students, ACEAS is enabling our younger generation to play a part in some of the most important ecosystem science research happening in Australia.