TERN delivers many kinds of infrastructure

The problem: diverse, non-collaborative approaches to Australian ecosystem science questions often result in duplication of effort, confusion around conclusions, uncertainty about precision and, ultimately, the fragmentation of ecosystem science communities. Unnecessarily divisive contests occur for research funding and the nation’s capacity to effectively address such questions is diminished.

This unique approach enables existing activities, infrastructure and data within multiple ecosystem science communities to be consolidated, and gaps to be identified and addressed. TERN’s approach has resolved incompatibilities and is delivering nationally consistent and workable methods and datasets.

In just four and a half years TERN has delivered a remarkable amount and diversity of infrastructure. You can check some of it out now via our interactive map available on TERN’s Data Discovery Portal. 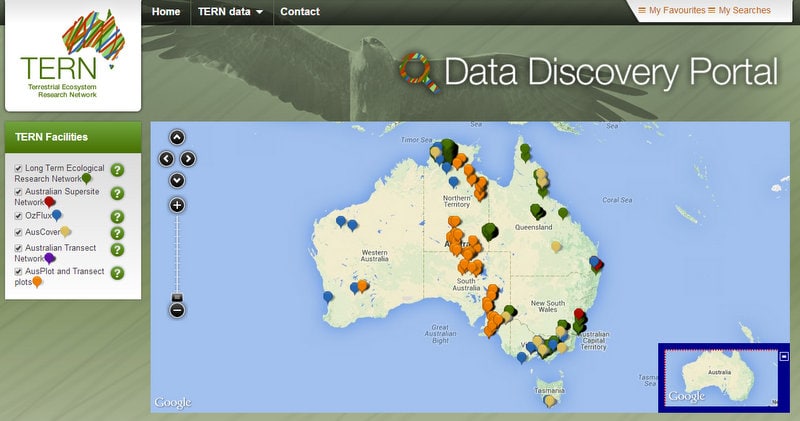 Take an in-depth look at the infrastructure TERN has delivered via our interactive map available on TERN’s Data Discovery Portal.

But this is only part of the story. In addition to the conventional ‘hard’ data collection and storage infrastructure (e.g. flux towers, transects and plot networks, real-time ecosystem sensors of all kinds), there’s our equally important, unmappable ‘soft’ infrastructure (e.g. nationally standardised methods, new ways of collecting, managing and discovering data and new multidisciplinary collaborations), that is also now beginning to benefit Australia’s ecosystem science and management communities.

Organising to develop, build and use a shared resource has strengthened existing ecosystem science communities and established new ones where there had not previously been formal collaboration and cooperation.

It’s difficult enough to simply and adequately describe the many different kinds of hard and soft infrastructure being delivered through TERN, although in this issue of the newsletter we’ve showcased a good cross-section of it. Even more difficult is the question of how best to measure and evaluate the benefits of this infrastructure, not just for the ecosystem research and management community, but for the Australian and international ecosystem science and management communities – and the Australian people.

It is essential that this public investment in fundamental collaborative research infrastructure ultimately delivers dividends for the Australian public. Therefore we need some way to evaluate how well TERN delivers infrastructure over time, so that we can understand what’s working well, and what we can improve on in future.

‘Good research infrastructure is catalytic,’ as Mike Grundy, the Director of TERN’s Soils facility, likes to say. Its neutral collaborative framework is the nucleus around which previously fragmented activities and communities can coalesce.

In surprisingly short periods of time, leaps forward become feasible on fronts that were not only previously inaccessible, but unanticipated. So it’s probably inappropriate to try to measure the impact of investment in TERN’s infrastructure for Australia by conventional proxies of research success, such as numbers of scientific publications or numbers of users (although we’re recording these as well). We have therefore embarked on a multidisciplinary experiment in infrastructure evaluation, the results of which we make publicly available in TERN Delivers.

TERN Delivers describes a number of quantitative and qualitative approaches to evaluating the impact of successful delivery of TERN’s infrastructure. However, we haven’t yet come up with a definitive method to measure the number or power of the multidisciplinary collaborations that are now coalescing around that infrastructure, or their impact for Australia over time. We’d be delighted to receive suggestions from stakeholders that we can incorporate into future versions.