The acorn and the oak: growing the high-tech nation from a primary interest in science

Alan Noble, the Engineering Director for Google Australia and New Zealand, has many passions, among them sailing and writing web apps for fun, and two that he pursues at work which intersect with TERN’s interests: freely available data, and more Australians working in the sciences and technology.

Alan will talk about these in his address at the TERN symposium dinner next month.

He’s been one of the top executives at Google Australia since early 2007. Today, the Sydney office is the global giant’s tenth largest engineering centre. When he joined the team, it employed about 30 engineers and had just released Google Maps.

‘It’s a great story. A four-person start-up called Where2 Technologies had a prototype for a mapping product that they pitched to Google. Off the back of that acquisition, Google decided to invest in R&D in Australia,’ Alan says.

Start-ups are another of Alan’s passions. He worked for 10 years in several before joining Google: ‘At heart I’m a software engineer. I like getting my hands dirty. I can’t do that in my everyday work now, but every year I try to carve out time to design something in a completely different field to my day-to-day work.’

It was a big move changing from companies with a staff of 40 or so to Google, which has about 30,000 employees worldwide.

‘I wear two hats. One is ensuring the health and well-being of Google Australia’s engineering centre.  We don’t call it an R&D centre, but there is often a research aspect to the engineering work. When you’re building products for tens of millions of users, you can’t necessarily scale the available technology and know-how, so we have to develop it.’

The other hat is an outreach role.

‘For example, I’m involved in Google Earth Outreach, which comes under the umbrella of Google’s philanthropic work, to give back to the community. We take Google’s suite of geo-spatial tools – Google Maps, Google Earth and others – and get them into the hands of non-profit organisations, such as those pursuing environmental and humanitarian issues,’ Alan says.

TERN’s AusCover is using it as the platform to share publicly its tools for monitoring landscapes.

Another outreach project is Google Crisis Response, which helps people manage the dissemination of information during environmental crises.

This role gives Alan free reign to advocate for open access to data and for the need for more people to work in science, technology, engineering and maths (STEM). It’s a role shared by others, including Australia’s Chief Scientist, Professor Ian Chubb.

‘Opening up government-held data, or so-called public-sector information, is incredibly important.  This information is a national resource. People have a right to it, and governments have a responsibility to engage with the community and take part in open, robust discussions about how to use it to create our future. Many of tomorrow’s innovations will be made possible from today’s data. What we recommended in the Government 2.0 Taskforce engagement report holds just as much now. Unfortunately, the barriers are more often than not cultural, not technical, as the tendency in the past has been to horde information,’ Alan says.

‘Australia also needs a robust STEM talent pool if we’re to continue to be a prosperous nation, and we’ve really stepped up our advocacy of this in the last couple of years. We can do this partly because of our size: with 300-plus engineers, we can pack some punch,’ Alan says.

‘Australia is not at the top of the league table in maths and sciences at school. We’re roughly on par with the US and the UK, but that’s not saying much: we’re well behind countries like Singapore, Japan and South Korea,’ Alan says.

‘The computer science curriculum around Australia is a shambles. There is no national curriculum – and in a country of 23 million people that’s ludicrous – and the curriculum is hideously out of date. Schools tend to teach how to use technology, so kids formulate a view that IT is about how to use spreadsheets and presentation software. But it’s actually about much more exciting stuff: how to design, how to create. Computing is nothing more than concrete mathematics, but it’s not talked about like that. Kids are oblivious to the opportunities.’

Raising awareness about the possibilities offered in all areas of STEM included promoting more home-grown success stories such as Where2 Technologies, and making STEM careers more attractive to girls and women. Part of Google’s project to improve Australia’s standing is Computer Science for High School (CS4HS), a program which partners schools and universities to give computing teachers access to quality professional development that reflects current developments in the industry.

‘It starts with awareness,’ Alan says. ‘This is a young discipline, so it’s evolving rapidly. It’s an exciting area.’ 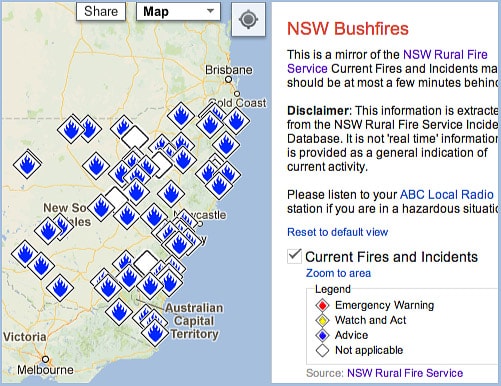 Google’s reach and philanthropy in action: using data supplied by the New South Wales Rural Fire Service, Google Crisis Response published free maps of the locations of all fires burning in New South Wales at the beginning of the year