Treasure trove of images from space to boost local research

AusCover has accessed 10 years of hyperspectral data collected over Australia by the satellite-borne sensor, Hyperion, and has made them available for the assessment of land and vegetation condition and for minerals research.

Getting this data is a boon, because a typical Hyperion image swath, covers around 325 km2 at 30 m resolution, and the data are free. In contrast, Australian hyperspectral datasets, including some of those collected over TERN supersites by AusCover, have mostly been collected at high resolution and for only small areas, between 25 and 100 km2, and at a cost $10,000 or more a campaign, using airborne systems.

AusCover Director Dr Alex Held said the current AusCover archive of 1276 Hyperion data files has been processed and is being made available. The facility has data from 2001–2010 and is proposing to update the archive with data from the past couple of years.

‘I’m excited that we decided to provide access via AusCover to this archive of corrected Hyperion data for Australia, as it will boost research into better ways to map the composition and dynamics of vegetation types and land-surface properties across our ecosystems,’ Alex says.

‘It will also be a key stepping-stone for remote-sensing research in Australia, as we prepare ourselves to receive and process terabytes per day of such data from German, Japanese, Italian and US hyperspectral satellites from 2015.’

Hyperion is a sensor on board the polar-orbiting satellite Earth Observing One (EO-1). It is the first civilian hyperspectral imager that NASA put into space. Launched in late 2000 for a one-year demonstration mission, it has continued to collect data (which is distribution by the US Geological Survey) – which means it has outlived its projected lifespan by more than 1000%!

Hyperion provides hyperspectral data across 242 spectral bands from 355–2500 nm with a pixel size of 30 m by 30 m at nadir (i.e. directly beneath the sensor) and a swath or cross-track width of 7 km.

To make the data available, the Remote Sensing and Satellite Research Group (RSSRG) at Curtin University, which hosts the Perth AusCover node, has developed software and implemented a workflow for automated Hyperion data processing on iVEC, a high-performance computing (HPC) system. The code was adapted from code the CSIRO Office of Space Science and Applications (COSSA) developed. It includes data pre-processing steps to fix errors such as missing lines and bad bands, and to compensate for spectral smile (shifts in wavelength response across an image). The corrected data are processed to surface reflectance, which is a physical characteristic of matter that can be used to identify different materials in much the same way as fingerprints are used to identify people. This was done using internationally accepted methods and developed with the help of colleagues at CSIRO Earth Science and Resource Engineering. All of the developed code is written in freely available languages and may be ported between operating systems. The code has been made modular to make it easier to upgrade or to add other processing steps, and to allow it to be adapted to support the next generation of hyperspectral sensors. 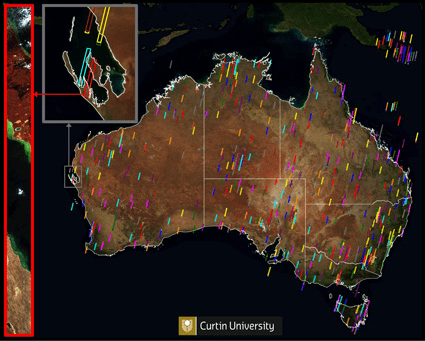 Overpass locations for all Hyperion data captured between 2001 and 2011 for
Australia. The grey-bordered inset of overpasses of Shark Bay shows the scale
of the Hyperion swaths. The red-bordered inset is an RGB image of the swath
captured on the 1 May 2003, which shows the Francois Peron National Park
and the town of Denham.