The Queensland government is a valued partner and user of TERN.  Thanks to long standing collaborations with the Queensland Department of Science, Information Technology and Innovation (DSITI) and the Queensland Herbarium, TERN is providing the state government with the data infrastructure necessary for them to house, update and re-use detailed data on remnant vegetation in Queensland.

This valuable dataset, known as CORVEG, is a major contributor to the first state-wide regional ecosystem maps in Australia, launched on 30 May by two Queensland State Government Ministers.

“Accurate mapping of our changing landscape makes it easier to avoid some of the impacts of clearing, for example, by preserving wildlife corridors between similar habitats,” said Queensland Environment Minister Steven Miles at the launch of the new maps.

Over 10,000 study locations across Queensland have been visited since 1982 to collect data on physical and vegetation features, including structural and floristic attributes well as descriptions of landscape, soil and geologic features.

The resulting CORVEG database is a key data source for defining, describing and classifying regional ecosystems, and ground truthing the RE mapping says Dr John Neldner the Science Leader of DSITI’s Queensland Herbarium.

“TERN provides the conduit for national and global access to this high-value vegetation data so we are highly appreciative of the TERN infrastructure and services.”

The other thing about TERN’s data infrastructure that suited Queensland Government needs is the fact that data can be accessed under a Creative Commons International 4.0 licence, says Steve Jones, Director of Science Information Services for DSITI.

“As well as protecting the data and their authors by law, publishing under Creative Commons is in line with the Australian and Queensland Government’s move towards greater open access to its information,” said Steve.

“Working with TERN has been great in focussing our attention on data management and strengthening our internal processes regarding data publishing and licensing.  The services TERN provides have also helped DSITI meet our open data goals.”

TERN’s data infrastructure, as ‘the conduit for national and global access’ to CORVEG data, not only gives this state government dataset widespread exposure, but also allows people to use the data without having to invest new funds to re-collect that information—saving huge amounts of time and money.

CORVEG data and RE mapping is widely used for environmental research and management, such as assessments of vegetation change and estimates of plant abundances, and for modelling of species and ecosystem distributions.  Business, government, NGOs and landholders are also users of the information.

Ecologist Dr Steve Murphy of Adaptive NRM is just one of the many researchers using the Regional Ecosystems mapping derived from CORVEG. Dr Murphy says that the mapping has been hugely valuable in efforts to protect and research one of Australia’s most endangered birds, the night parrot.

“A fundamental aspect of our research program has been to identify and describe night parrot habitats.  Queensland regional ecosystems mapping is the main tool we use to define habitats at a regional level in western Queensland, where the elusive bird is found.”

Discovering Qld CORVEG Data in TERN AEKOS: Viewing a Location of Interest by IBRA from TERN Australia on Vimeo. 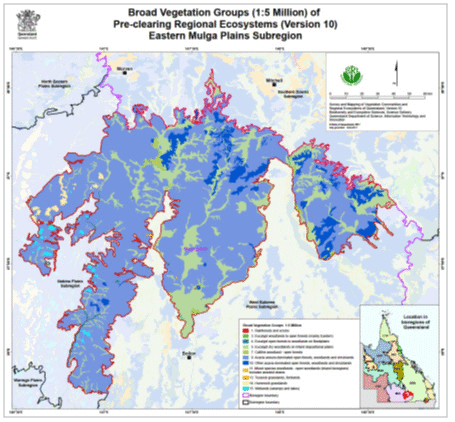