The dynamics of water use from all vegetation communities, including ‘biodiversity hotspots’ such as groundwater dependent ecosystems, can be monitored through droughts and floods. They are essential information for environmental policy-makers and managers, the Australian irrigation industry, and will help promote enhanced water resource management and ensure the nation’s food security.

Like many other parts of the world, water availability in much of Australia is scant.  The largest consumptive component of our water balance is the water that’s removed from the land-surface and plants by evaporation and transpiration—called actual evapotranspiration (AET).

Accurate AET information is vital for informed water and environmental research, decision-making and resource management.  Moreover, because 70% of Australia’s available freshwater resources is used for crop and pasture irrigation, AET data are essential for better irrigation monitoring and management.

The TERN AET CMRSET dataset is now openly available for download via the TERN Data Discovery Portal. The dataset is also available through Google Earth Engine (link at bottom of page).
Click Here

TERN’s high-resolution, monthly and accurate AET estimates for the entire Australian continent will allow precise water balance modelling for any catchment or groundwater system in Australia, says Dr Tim McVicar, a spatial eco-hydrologist at CSIRO with 30 years research experience in the use of time series remote sensing data.

Additionally, the data provide much needed information on the water needs of groundwater dependent ecosystems allowing for enhanced management of these small but critical biodiversity hotspots.”

TERN’s new AET dataset has been produced in collaboration with Dr McVicar and other world-leading researchers and software engineers at CSIRO Land and Water.

The CMRSET AET model has been calibration and validated using data collected from the TERN OzFlux network. It has also been validated at catchments using gridded meteorological data and streamflow data made available by BoM. Additional validation shows the TERN AET data are as accurate as other global AET datasets (having at best 500m resolution) yet having much higher spatial resolution (30m).

It is this amalgamation of data from multiple sources that results in AET data that are high-resolution (30m), high-frequency (monthly), continuous (no gaps due to cloud) and accurate—all ideal characteristics when calculating the water balance for a wetland, paddock, river reach, irrigation area, landscape or catchment. 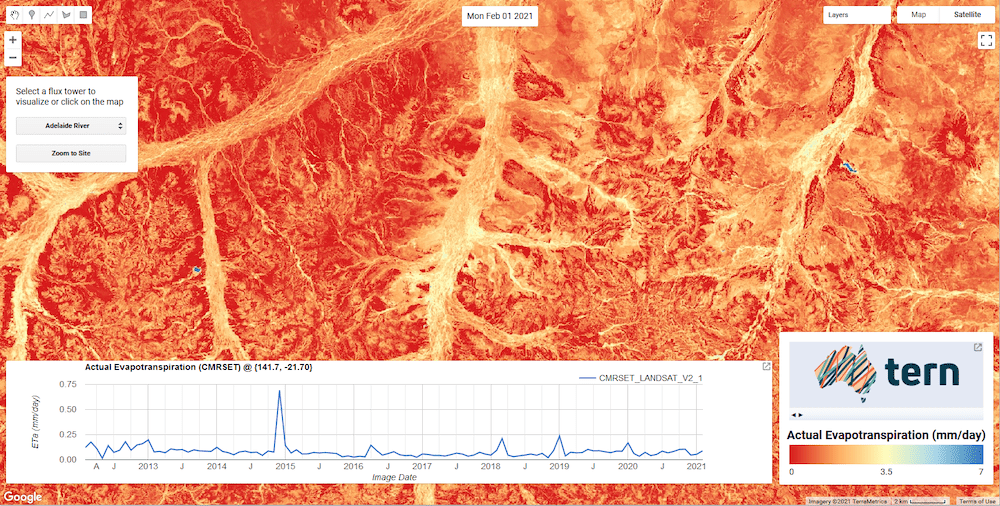 The TERN AET CMRSET dataset is now openly available for download via the TERN Data Discovery Portal.  TERN and CSIRO have also teamed up with Google to make the dataset also available through Google Earth Engine.

Google’s enormous cloud computing power, combined with more than 40 years of global satellite imagery and tools and methods housed in thousands of computers in Google’s data centres, mean that data users now have the knowledge and resources they need to track water use dynamics from the paddock-to-continental scales using Google Earth Engine, Google Earth and Google Maps.

Jamie Vleeshouwer, also of CSIRO, is a key member of the team who worked behind the scenes with Google to make these advancements possible.

“Users no longer have to worry about data preparation or finding storage for terabytes of data, which can be up to 80% of people’s time in projects and be too difficult for personal laptops to handle. We accessed over 75 TB of Landsat imagery on Google Earth Engine to produce the monthly data from Feb 2012 onwards.

“Google Earth Engine’s near-real-time processing means that common tasks in the Grid now execute in under a second, with more complicated tasks taking about five seconds.

It’s also great for collaboration and communication as scripts and imagery can easily be saved and shared without shipping around too much data.”

Combined with data already freely available via The Grid, the TERN Data Discovery Portal and CSIRO’s Data Access Portal, access via Google Earth Engine provides unprecedented capability in the use of TERN data for all sorts of agricultural, environmental management, conservation and landscape science projects.