Water—or the lack of it!—is always a topic of interest to Australians, living and working as we do on the driest inhabited continent on Earth. TERN’s integrated ecosystem-observing infrastructure produces open data on multiple phenomena at the same time and location, ranging from biodiversity to hydrology. Here we bring you stories of the way some scientists are using TERN’s open access, co-located infrastructure to increase understanding of our groundwater resources and the terrestrial ecosystems that depend on them.

TERN’s ecosystem-observing infrastructure enables our users to efficiently study correlations and interdependencies between variables in great detail. Given the importance of water for life itself, it’s not surprising that some of Australia’s leading scientists are using TERN infrastructure to increase understanding of our groundwater resources and the terrestrial ecosystems that depend on them.

By co-locating our ecosystem-observing infrastructure with other publically funded science research infrastructure we’re ensuring Australia’s groundwater researchers have access to the comprehensive suite of terrestrial monitoring facilities and open data they require. The advantage of co-location is the development of integrated observatory stations producing data on multiple phenomena at the same time and location, thus allowing us to study correlations and interdependencies between variables in great detail. 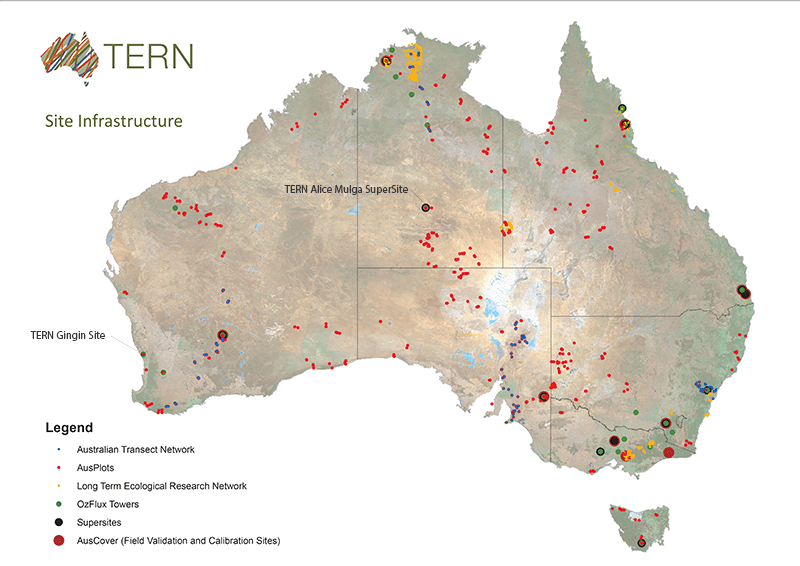 In the Mulga woodlands and hummock grasslands 100 kms north of Alice Springs at TERN’s Alice Mulga SuperSite this suite of co-located infrastructure and data is openly available to researchers. 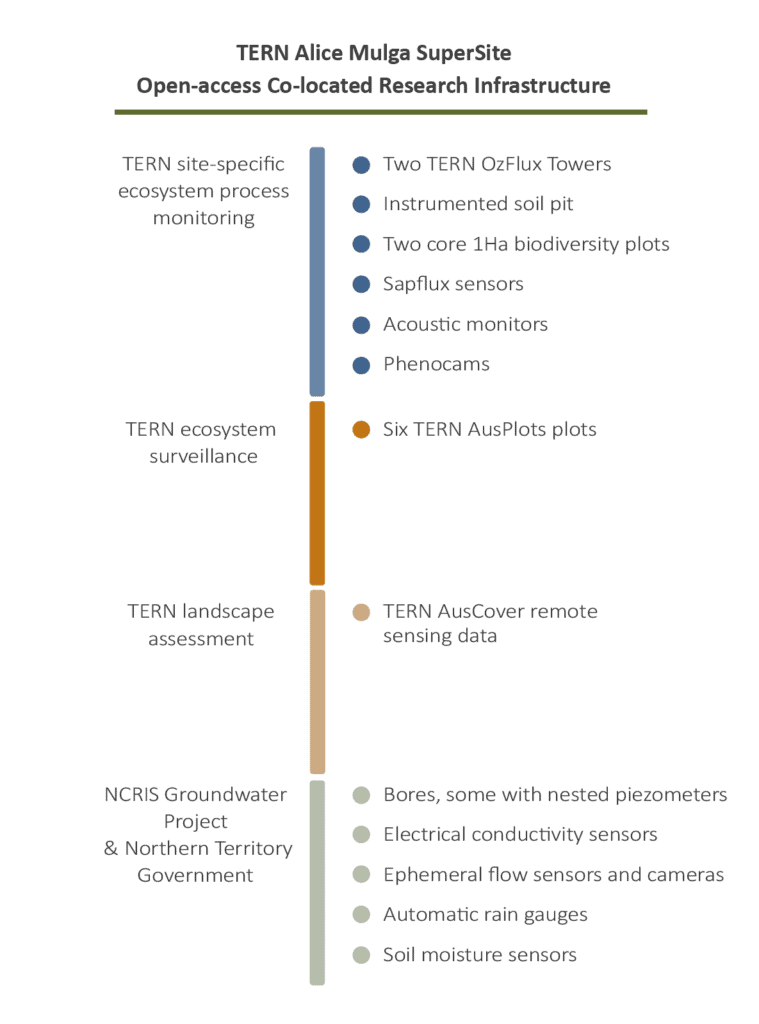 Two TERN OzFlux monitoring towers and six TERN AusPlots plots operate at the site, together with sapflux sensors in the riparian corridor of the ephemeral Woodforde River, as well as acoustic monitors and phenocams in contrasting Mulga and Spinifex ecosystems. Remote sensing data delivered by TERN AusCover is also available for the site.

Located alongside these is the groundwater monitoring infrastructure provided by the NCRIS Groundwater project and the Northern Territory Government, which includes dozens of bores, some with nested piezometers, electrical conductivity sensors, ephemeral flow sensors, cameras, automatic rain gauges, and soil moisture sensors.

This suite of co-located research kit is being used by some of Australia’s most eminent researchers to better understand groundwater recharge in arid climates and the interactions between groundwater and vegetation.

In just one example of their recent research, Margaret, Peter and their colleagues have used the site’s infrastructure and data to compare methods for estimating groundwater discharge by evaporation from soil and the entire ecosystem (including transpiration, which is evaporation occurring within the leaves of plants)—a vital water budget component that impacts groundwater use and the long-term viability of the resource.

“Increased horticultural development is being encouraged in the region but before our research the precise magnitude of groundwater recharge wasn’t known and discharge hadn’t been measured,” says Peter.

“Without access to the suite of above and below ground equipment which co-location brings, much of our research would simply be impossible.” 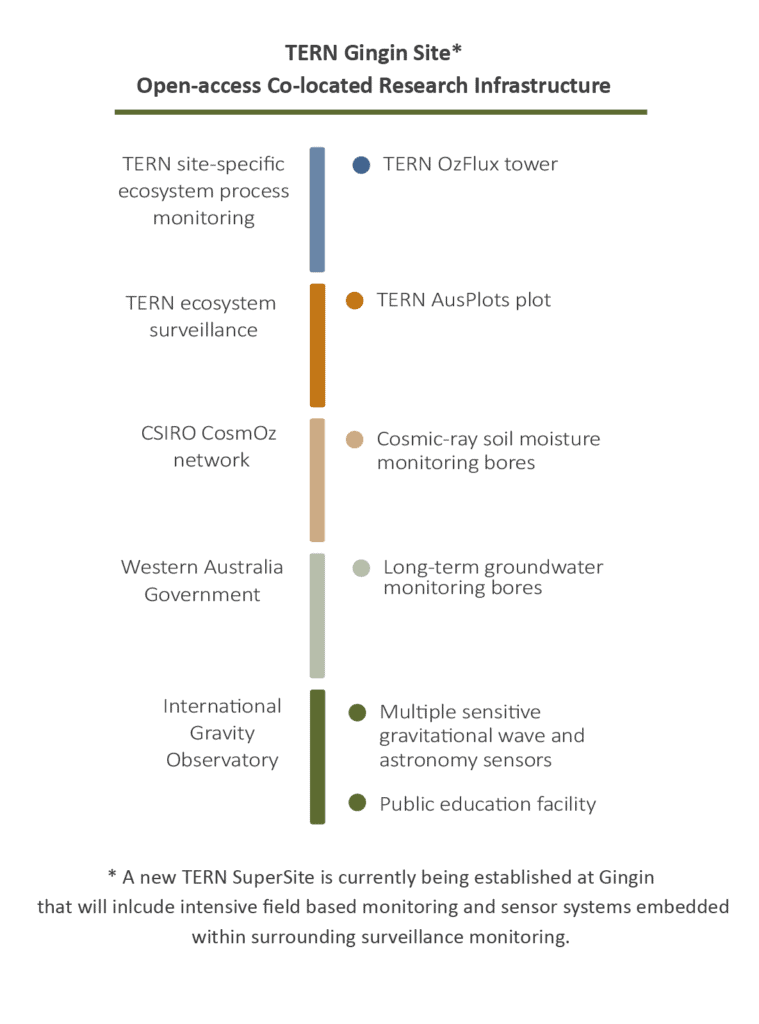 About 2500 kms southwest there’s a similar story of collaborative use of co-located TERN infrastructure unfolding.

At TERN’s ecosystem monitoring infrastructure at Gingin, 70 kms north of Perth, researchers are using the site’s OzFlux tower together with co-located infrastructure provided by CSIRO’s nationwide CosmOz cosmic-ray soil-moisture-monitoring network and the WA Department of Water to quantify groundwater recharge and investigate why watertables are falling and some of the ecological and social consequences.

“Having access to two sets of measurements at the site—TERN flux data and CosmOz data—not only increases the quantity of data we can collect, but also means that we’re able to correlate the data to ensure accuracy,” says Richard.

“The co-location of a WA Deptartment of Water and Environmental Regulation long-term monitoring bore with several decades of data tracking the decline in watertable also provides an historical context with which we can judge current ecosystem behaviour and groundwater trends. Our evaporation data also provides the Department with the option of calculating recharge on an almost real-time basis.”

Richard is also working with the University of Western Australia’s International Gravity Observatory to provide real-time meteorological data that will assist in understanding the effects of environmental noise interference on the gravitational radiation detector planned for the Gingin site.

AuScope in talks with TERN to expand co-located infrastructure

TERN’s mature infrastructure-sharing arrangements are set to be further enhanced thanks to exciting new collaborations with fellow NCRIS project AuScope.

AuScope’s Director, Tim Rawling, says that the two NCRIS projects already provide complementary terrestrial monitoring activities, TERN above the ground and AuScope below it, but there is scope for further integration.

“We’re working with TERN to investigate how we can co-locate instrumentation,” says Tim.  “Specifically, we’re exploring how AuScope’s seismic sensors can be co-located with TERN’s flux monitoring towers and SuperSites, so users can extract, for example, the seismographic information related to impacts on groundwater and ecosystems.”

“The benefits which co-located infrastructure brings our users are too large to ignore, and we hope to deliver these improved services in the near future.”

Keep an eye out in upcoming editions of TERN eNewsletter for more information on TERN’s collaborations with AuScope.  In the meantime, follow the links below to start exploring the services and data our established co-located infrastructure provide:

Published in TERN newsletter August 2017
Back to News