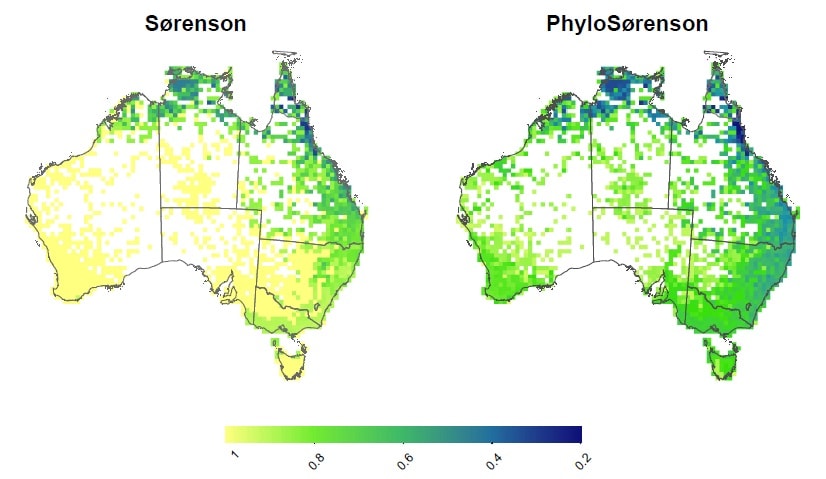 These maps are an output from the ACEAS workshop described above. Described as ‘turnover surfaces’ for the family Myobatrachidae, the plots indicate the rate of species (left) and phylogenetic (right) turnover between each cell and those in Cape York, calculated using the Sørenson index. Areas with a value of 1 have complete turnover (no shared species or branches of the tree between it and Cape York). A value of 0.5 means that approximately half the species or branch lengths are shared.

What’s a hardworking manager to do when she doesn’t have the resources to improve the tool her department uses to identify and prioritise areas important for biodiversity? Well, if you’re Tania Laity, manager of the federal environment department’s Australian Natural Heritage Assessment Tool (ANHAT), you ask TERN for help.

While ANHAT worked well for many applications, Tania’s problem was that there was no useful way to compare and evaluate the phylogenetic and taxonomic diversity of Australia’s biota and its biogeography. An approach had been trialled for mammals, but difficulties were being encountered in the operational and interpretation steps. A/Prof Alison Specht, Director of TERN’s Australian Centre for Ecological Analysis and Synthesis (ACEAS) Facility, encouraged and assisted Tania to put a world class team together to deliver a solution that would not only work for the Department, but have much wider applications.

The resulting ACEAS Workshop named ‘Integrating Measures of Phylogenetic and Taxonomic Diversity and Endemism into National Conservation Assessment’, met in Brisbane from 14-16 May 2012. The group consisted of six officers from relevant parts of the federal environment department (DSEWPaC) and 14 carefully selected scientists from a range of disciplines and institutions, including Dan Rosauer from Yale and Prof. Craig Moritz from the University of California (Berkeley).

Tania is pleased with the approach the group is taking so far. Following the discussions and analyses that occurred during the initial workshop the group is running further analyses and preparing a policy paper and application guidelines. Two case studies will focus on the high-priority and high-biodiversity regions of Cape York Peninsula and south-west Western Australia.  Before the end of the year these products will be helping enhance the quality of the biodiversity information available to DSEWPaC in making assessments for natural heritage and conservation purposes.

“Not only will ANHAT’s capabilities be enhanced,” Tania added, “but the outputs we’re working on now could also be used to improve environmental decision-making by local and state government departments, and lots of other organisations concerned with conservation and natural resource management.” ACEAS looks forward to facilitating this process further!