App turns soil data into information on the go

People can get data and information on the soil they are standing on, thanks to an app developed by several national research organisations. The app, called SoilMapp, runs on the iPad, and provides direct access to national soil data and information from the Australian Soil Resource Information System (ASRIS) and ApSoil, the database behind the Agricultural Production Systems Simulator (APSIM).

It was developed by the Australian Collaborative Land Evaluation Program (ACLEP), in collaboration with CSIRO and the Grains Research and Development Corporation(GRDC). The TERN facility, Soil and Landscape Grid of Australia (‘TERN Soils’) works closely with ACLEP to improve the availability and accessibility of consistent national soil data and information for a wide range of users. Mr Peter Wilson from TERN Soils said the facility is developing new fine-resolution soil and terrain data sets which will be progressively released through the TERN soil data portal and ASRIS and become an important data source for the app.

‘SoilMapp gives users access to the best available soil data, either for their current location by using the iPad’s GPS, or by the user identifying any place of interest in Australia,’ Peter says. ‘Users make a direct web connection to data services from ASRIS and ApSoil. This makes SoilMapp unique and innovative, and it also ensures that the data returned is always the latest and best available, a great benefit to researchers, land managers and developers on the ground. SoilMapp provides a lot of soil information supplied largely by state and territory agencies and from CSIRO research, including the Australian Soil Classification types most likely to occur at the location, descriptions of reference sites for each likely soil, and summary data on each soil’s key attributes (such as pH, organic carbon and clay content). Data and descriptions from specific ASRIS field sites can also be displayed, as can analytical data associated with sites that have samples which now reside in the CSIRO’s National Soil Archive.’

Experienced users who can accurately identify the actual soil type in the field based on the SoilMapp data provided can submit that soil-type record back to ASRIS. This will assist future validation of national soil datasets, including those generated by TERN Soils. Farm advisers and crop modellers can access the most relevant data on soil-water characteristics and submit field-modified data back to ApSoil for further analysis in APSIM.

For now, SoilMapp is only available for the iPad – and can be downloaded free from iTunes in time for Christmas! In the meantime, developers will progress work on the inclusion of the other soil and terrain datasets, which will be made available from TERN Soils over the next 12 to 18 months.

The Soil and Landscape Grid of Australia is holding an invitation-only workshop in Brisbane on 7 and 8 November to discuss the various technical issues and opportunities associated with its implementation of digital soil mapping. The workshop will refine TERN Soil’s approaches and work plans for delivery of soil-data products over the next 12 to 18 months. For more information, email the facility Director and workshop convener Mike Grundy.

Using the iPad app, a range of map- and site-specific soil data is accessed
directly via web connection to a number of national database 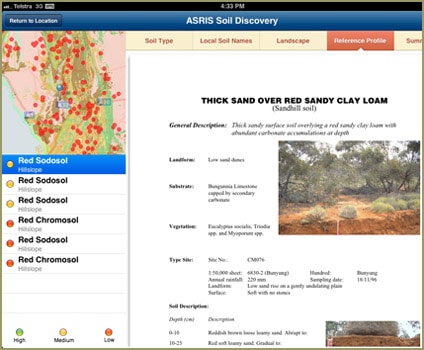