Appreciating the value of open-access data

Most infrastructure investments depreciate over time. By contrast, investments in ecosystem data actually appreciate in value as time passes – as long as the data remain discoverable and useful.

The oldest site in TERN’s Australian Supersite Network, Warra, in the tall eucalypt forests of southern Tasmania, serves as an excellent example of the cumulative power not only of long-term data collection, but also of multidisciplinary data sharing and publishing. Warra was designated as a long-term ecological research site in 1995, and has decades of data now available. They are proving to be irresistible to researchers, according to the Warra Director, Dr Tim Wardlaw, of Forestry Tasmania.

‘In just the last few years we’ve seen an exciting shift in the focus of projects being undertaken here,’ Tim says.

‘Because researchers can now relatively easily access and use a diverse range of published long-term datasets collected at Warra [an increasing number of which are becoming available via the TERN Data Discovery Portal, they can start to tackle more complex multidisciplinary questions about the underlying ecosystem processes. And building understanding of those processes is what’s needed if we’re to predict how these tall eucalypt forests will respond to changes in climate or disturbance regimes.’

A team of researchers has been busy at Warra this month on just such a project. Revisiting the same trees they tested in the summer of 2012, they are making a range of ecophysiological measurements to investigate the energy, nutrient and carbon balance of the forest.

The ready availability of other datasets for Warra from a range of disciplines was a key factor in the researchers’ choice of study site. Dr Keith Bloomfield from ANU said that the team was also working at a number of other TERN supersites, for the same reason.

‘In combination with the direct observations we’re making here, these data will contribute to a more useful process-based understanding of how Australia’s forest ecosystems function, now and in the future,’ he says.

Meanwhile, Dr Sam Wood from the University of Tasmania has established four forest AusPlots plots in and around Warra.

‘If you’re interested in detecting changes over time, one of the most important criteria in choosing sites is availability of pre-existing observations, because it provides a longer time depth to datasets and adds invaluable historical context to future measurements,’ Sam says.

‘Putting plots in at Warra was an obvious thing to do for us because the long-term data are accessible, and the results of a wide range of other research and observations being conducted here are likely to enhance our ability to interpret our own data.’

Tim sees other advantages to data sharing and publishing for organisations like Forestry Tasmania.

‘Take the Tasmanian Forestry Insect Catalogue as an example,’ he says. ‘It contains mind-boggling amounts of information about insects and their distribution in Tasmanian forests. We don’t really have the capacity to do much analysis of this dataset ourselves, but we’re expecting that by making it freely available online, it will be useful to researchers who can.’ 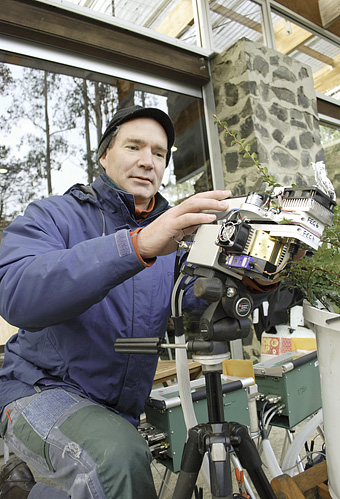 Dr Keith Bloomfield (pictured at Warra in June 2013) and his colleagues have been working at the Warra supersite to investigate the energy, nutrient and carbon balance of the forest (Photo courtesy of Forestry Tasmania) 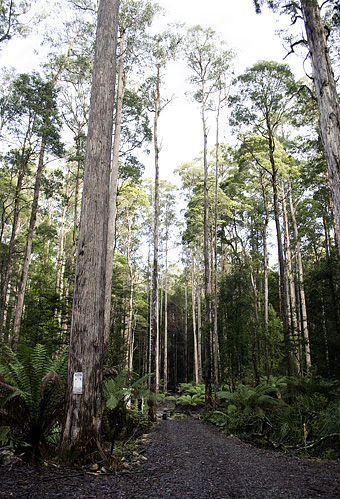 The Warra supersite in the tall eucalypt forests of southern Tasmania is an excellent example of the cumulative power of long-term data collection, publication and sharing (Photo courtesy of Forestry Tasmania)