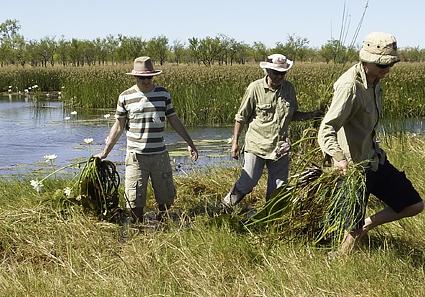 The AusPlots Rangelands survey team, more used to the arid deserts of inland Australia, has shifted its focus north this field season to begin surveys in western Queensland.

Most recently AusPlots researchers began surveys in the Mount Isa Inlier and Gulf Plains bioregions, where they took their first foray into samphire flats and coastal dune communities.

AusPlots survey locations are chosen in consultation with state and federal agencies to fill data gaps and provide a national network of representative monitoring sites. Ecological communities on coasts or close to major population centres tend to be more heavily visited by scientists, so by targeting remoter areas, AusPlots is building the data foundation that will help scientists understand the bulk of Australia’s interior and northern regions.

The Director of TERN’s Australian Transect Network, Mr Stefan Caddy-Retalic, was part of the survey team.

‘The sites we have surveyed have been on a range of tenures, including conservation parks, pastoral leases and an Indigenous pastoral property,’ Stefan says.

‘Ninety-three per cent of the Gulf Plains are grazed, so working with people who manage these tenures allows us to collect data that helps them manage their properties better while giving us a better understanding some of Australia’s least understood communities. The support we have received from pastoralists in giving us access to their properties and sharing their knowledge has been critical to building this network.’

‘It’s been a fantastic opportunity to explore some new bioregions,’ Emrys says.

‘The recent surveys in Queensland are filling data gaps locally, and contributing to the value of the whole AusPlots network. Our new plots particularly complement those we surveyed in the Gulf Fall and Uplands bioregion of the Northern Territory last year, and provide a great contrast with sites in central Australia, particularly in the Finke, Coolgardie and Broken Hill Complex regions.’

The taste of western Queensland has whetted AusPlots’ appetite for variety, and the facility is planning trips to the Avon Wheatbelt and Coolgardie bioregions of Western Australia and the Stony Plains region of South Australia. Trips to the Gammon Ranges (Flinders Lofty Block bioregion) and Kangaroo Island (Kanmantoo bioregion) are also on the menu.

AusPlots conducts regular surveys in rangeland bioregions for which there is very little data. This is mainly due to difficulties in access: their remoteness makes them expensive and time consuming to reach, and being so far away from population centres adds logistical challenges that are difficult for research groups to overcome. By collecting broadly useful data, AusPlots is providing a valuable service in bringing data from the bush to researchers. In working with landholders including pastoral leaseholders, conservation estate managers and Indigenous groups, the facility is collecting data that can support the management of properties as well as core research.

The TERN AusPlots facility, which comprises rangelands and forests themes, is establishing a national network of one-hectare monitoring sites across Australia. Extensive information on soils, as well as vegetation structure and composition, is recorded and made publically available through the AEKOS portal. Soil and plant samples are also contributed to the CSIRO National Soil Archiveand regional herbaria.