Collaborative science at work in the Top End

Extreme fire weather has increased in many parts of Australia over the last three decades, and projections for the future indicate that the likelihood of extreme fire events will increase. In this context an integrated, multidisciplinary approach is required to better understand the nature and impacts of bushfire in the Australian landscape.

To this end, scientists, statisticians, park rangers, Aboriginal custodians, school and university students, an agronomist and an artist all threw their knowledge into a survey in Kakadu National Park last month to contribute to our understanding of the effects of extreme fires in savannas.

They also learned firsthand about the value of each others’ knowledge during the field trip, which was to conduct ecological surveys.

Their work helps scientists understand fires in savannas, and how the fires affect biodiversity. As extreme fires are likely to become more frequent in Australia, this has become a pressing concern in the Top End.

The work is part of the monitoring program of the Three Parks Savanna Fire Effects Plot Network, a member of TERN’s Long Term Ecological Research Network (LTERN). The Three Parks network was established in 1994 with the primary aims of training national park management staff and assisting with the development of adaptive approaches to conservation-based fire management in regional savannas.

The program combines remotely sensed imagery of fire history with data collected on the ground from a network that comprises 220 permanent plots across habitats in Litchfield, Kakadu and Nitmiluk national parks. Plot sampling involves annual recording of fire incidence and severity, and, every five years, detailed vegetation and fauna sampling undertaken on respective parks. This trip focussed on the five-yearly survey in woodland savannas, and in 2014 the team intends to sample the upland sandstone plots. 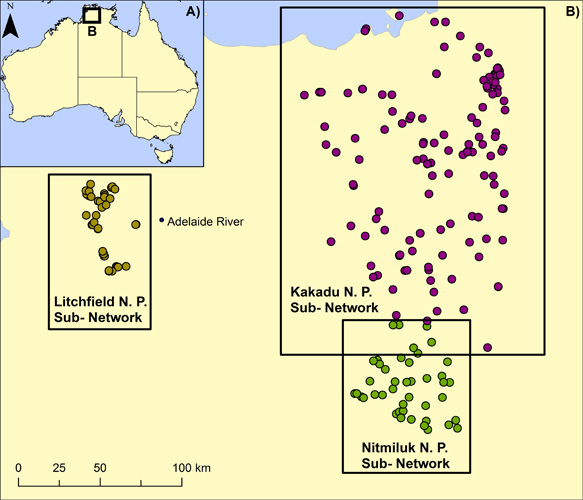 The plots in the Three Parks Savanna Fire Effects Plot Network, which forms part of LTERN

The value of this long-term research infrastructure to the ecological research community was clear during the April trip as guest scientists joined plot network staff undertaking the regular surveys. Among them were:

The involvement of these experts and their conservation and research agencies with the Three Parks Savanna Fire Effects Plot Network helps all of them build a comprehensive understanding of how the savannas work, and what condition they are in. We need this knowledge so we can manage the landscape to retain healthily functioning ecosystems. The collaborative research also means there are cost savings, because it would be too expensive if each group or agency worked independently.

Activities in the plot network also contribute to the education, knowledge management and community support in the region, with program organisers welcoming students from Charles Darwin University and the local Jabiru school, as well as district and seasonal rangers from Kakadu National Park and Traditional Owners, and members of the general public, all of whom formed part of the survey effort. Also among the volunteers were Mr Rob Brown, a visiting local artist, and an agronomist who came along to learn more about natural resource management and the impacts of fire.

The Assistant Director of LTERN, Dr Emma Burns, was one of the scientists on the field trip.

‘It was a very successful field trip and everyone had fun doing the work. The highlights for most of us were the trips in the helicopter to remote sites, and late afternoon swims in waterholes,’ Emma says.

‘Sadly, what was also evident was a distinct lack of ground-dwelling animals such as large lizards, snakes and small mammals. The decline of fauna is starkly noticeable. Many Territorians believe this is due to the cane toad. That may be mainly so, but scientists have identified altered fire regimes, predation, and other exotic animals as contributing causes. We’re not yet clear on how these factors interact and contribute to the declines that we, and others, have observed.’

The ecology of the tropical savannas, the decline of fauna, and other research discoveries from the Three Parks Savanna Fire Effects Plot Network are featured in a forthcoming book called Biodiversity and environmental change: monitoring, challenges and directions. Publication is anticipated in late September.

Published in TERN e-Newsletter May 2013