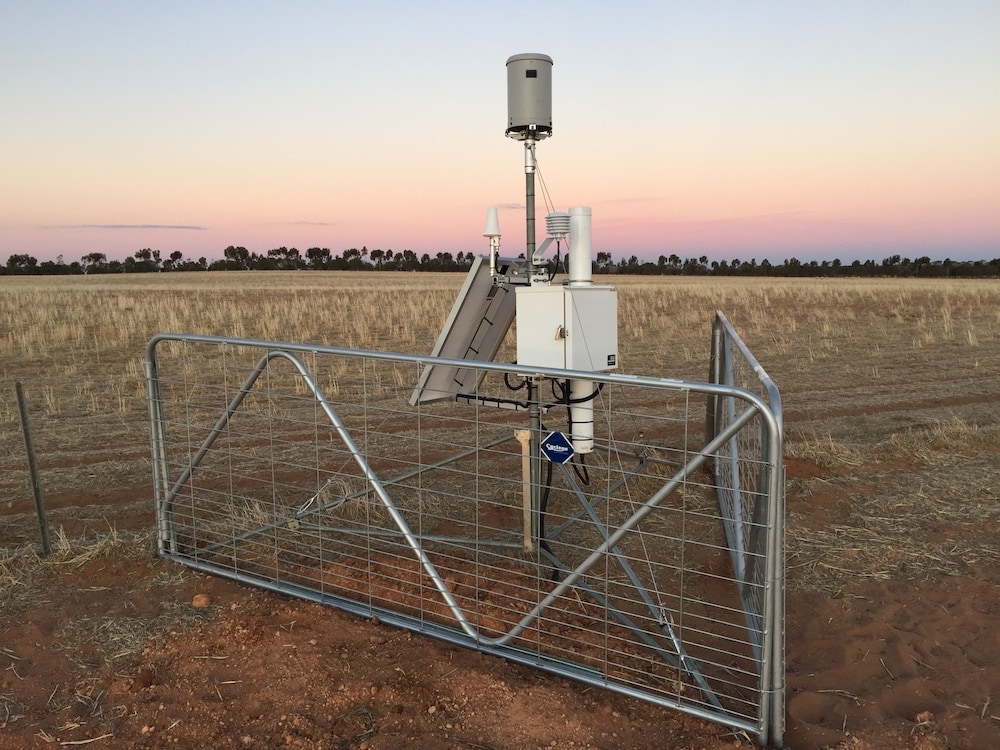 The new CosmOz website lets users visualise then download open-source soil moisture and rainfall data from a growing number of sensors.  Australians can now benefit from precise soil moisture data, which is becoming increasingly valuable in understanding ecosystem function and in areas such as agriculture and forecasting floods and other natural disasters.

The CosmOz soil moisture network is Australia’s collection of stationary cosmic-ray soil moisture sensors.  The sensors provide, almost in real time, measures of soil moisture averaged over about 20 ha and, depending on conditions, to a depth of 10 cm to 40 cm.

They do this by measuring fast neutrons that are produced from interactions of cosmic rays with the atmosphere and the top few meters of soil.  The intensity of these neutrons is moderated largely by water molecules in the soil.  The number of neutrons counted over a period of time is inversely proportional to the amount of water in the soil.

A CosmOz sensor in an agricultural landscape near Birchip, Victoria (above) and an example of the soil moisture data it collects (below)

In 2020, the Australian CosmOz soil moisture network is set to be expanded from 16 to 23 sites thanks to the capital investment from NCRIS-enabled TERN, the Queensland Government and CSIRO.

Ross Searle of the CSIRO says that NCRIS and Queensland Co-investment Research Infrastructure Fund grants are enabling soil moisture sensors to be located in key development regions where there are known data gaps.

“Not only will the sensors provide accurate data on the immediately surrounding areas, they will also provide measurements to improve the accuracy of national-scale soil moisture modelling as well as providing data for numerous scientific studies.”

A sensor is also planned for the Boorowa Research Station outside of Canberra and another for Queensland’s Brigalow Belt, one of Australia’s most significant biodiversity hot spots and a key site to contrast long term agricultural use with the original forest.

Installations of the latest sensors in the CosmOz network will start as soon as COVID-19 travel restrictions allow. We look forward to announcing the flow of new data streams via the TERN website, newsletter and socials.