Late last year the Federal Government announced its $142.5 million National Environmental Science Programme (NESP) and the organisations that will lead research in the program’s six hubs. January 2015 marks the start of the National Environmental Science Programme’s planning phase so we take this opportunity to chat with hub leaders Dr Helen Cleugh and Professor Hugh Possingham about their hubs’ plans for the coming year and the importance of TERN’s infrastructure to their research.

Dr Helen Cleugh, of the CSIRO, leads the Earth Systems Hub, which is tasked with furthering our understanding of the drivers of Australia’s climate. It will be a national partnership, with world-leading capability in multi-disciplinary Earth system science and modelling, providing Earth system & climate information in support of a productive and resilient Australia. It will undertake research to support predictions of climate variability and extremes across days, seasons and decades; improve our understanding of past and future climate drivers in the Southern hemisphere; and provide longer-term climate projections and scenarios to meet end-user policy, decision-making and management needs.

‘TERN’s infrastructure, in particular that of the OzFlux facility, has been the catalyst for a significant advance in what we know of the land-air exchanges of carbon and water across a range of ecosystems and meteorological conditions. This information has enabled us to test Earth System models and ensure that they adequately represent Australian ecosystems and their interactions with Australia’s highly variable and changing climate – including extremes,’ says Helen.

‘The Earth Systems NESP Hub will rely on this national research infrastructure to provide the hard and soft infrastructure that supports observations of the Earth system, including data sets, data acquisition, and data sharing.’

In addition to the high quality information and data that’s available to the new NESP hubs thanks to TERN infrastructure, the achievements TERN has made in connecting Australia’s research community are also expected to make life easier for hub leaders.

Professor Hugh Possingham, of the University of Queensland, leads the Threatened Species Recovery Hub, which has been tasked with supporting the management of threats and improving recovery of threatened species.

Hugh, a previous participant in working groups with TERN’s ACEAS facility, says that the collaborative links between researchers he developed via TERN will be crucial to implementing the hub’s plans.

‘Past TERN events have enabled hub leaders from around Australia to reflect on the highlights of the CERF and NERP programs and recognise the factors that that have enabled the program to deliver so many critical environmental outcomes in such an efficient way,’ says Hugh.

‘I plan to use the findings generated via the TERN workshops to inform how the Threatened Species Recovery NESP Hub can best achieve its goals in 2015.’

‘Having access to the collaborative network of researchers that TERN has established at universities, government departments and research agencies around the country is a huge advantage,’ says Hugh.  ‘It will allow us [the Threatened Species Recovery NESP Hub] to work more collaboratively, efficiently and effectively to deliver positive outcomes as soon as possible.’

To ensure the NESP hubs led by Helen and Hugh, and all the other hubs relevant to TERN, can continue to utilise TERN’s infrastructure to its full potential, TERN’s director, Tim Clancy, is planning meeting with hub leaders early in 2015.

‘We’re keen to meet with the NESP hubs to see how we can best assist them in their plans for their research program in the coming months’, says Tim.  Tim also plans to involve other relevant NCRIS projects like the Atlas of Living Australia (ALA), the Integrated Marine Observing System (IMOS) and the Australian National Data Service (ANDS).

Until the advent of TERN, ecosystem science efforts in Australia tended to be fragmented, localised and short-term in terms of both capacity and tenure. TERN has worked closely with many partners to successfully deliver shared research infrastructure that is allowing Australia’s ecosystem scientists to collaborate and synthesise effectively across regions and disciplines.

Government investment in TERN is enabling our top science researchers to monitor, understand and manage Australia’s ecosystems at the national scale and in the long term, more comprehensively and meaningfully than ever before.

We are looking forward another year of facilitating fantastic collaborative science via the National Environmental Science Programme and all our other user groups and individuals. 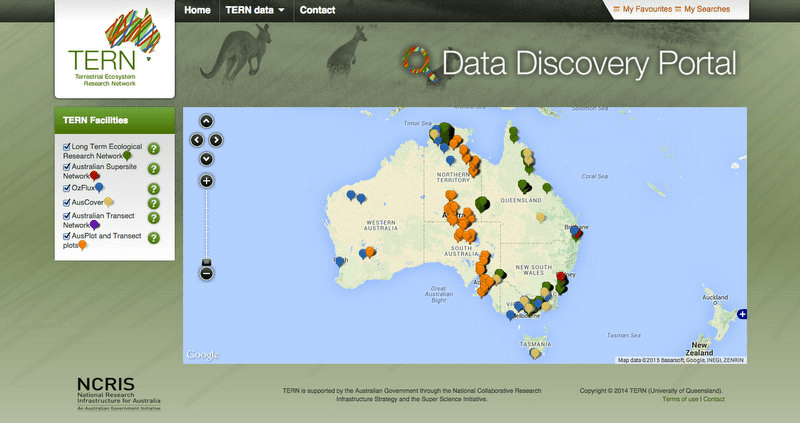 Take an in-depth look at the infrastructure TERN has delivered via our interactive map available on TERN’s Data Discovery Portal.