Ecologically appropriate and economically viable: how long-term research is transforming fire management in the Top End

Extreme fire weather has increased in many parts of Australia over the last three decades, and projections for the future indicate that the likelihood of extreme fire events will increase. In this context an integrated, multidisciplinary approach is required to better understand the nature and impacts of bushfire in the Australian landscape.

To this end, scientists, park rangers, and Aboriginal custodians all threw their knowledge into an ecological survey in Nitmiluk National Park last month to contribute to our understanding of the effects of savanna fire regimes on biodiversity, biomass carbon stocks, and greenhouse gas emissions. These are pressing issues given the high frequency of savanna fires already prevalent in Top End savannas, and modelled projections for very significant increases in the number of very hot days in coming decades.

The work is part of the monitoring program of the Three Parks Savanna Fire Effects Plot Network, a member of TERN’s Long Term Ecological Research Network (LTERN). The Three Parks network was established in 1994 with the primary aims of training national park management staff and assisting with the development of adaptive approaches to conservation-based fire management in regional savannas.

The program combines remotely sensed imagery of fire history with data collected on the ground from a network that comprises 220 permanent plots across habitats in Litchfield, Kakadu and Nitmiluk national parks. Plot sampling involves annual recording of fire incidence and severity, and, every five years, detailed vegetation and fauna sampling undertaken on respective parks. This trip focussed on the five-yearly vegetation survey, and over the coming weeks the team will be surveying the park’s fauna.

The involvement of these experts and their conservation and research agencies with the Three Parks Savanna Fire Effects Plot Network helps all of them build a comprehensive understanding of how fire regimes affect savanna structure and processes, and their condition. We need this knowledge so we can manage the landscape to retain healthily functioning ecosystems. The collaborative research also means there are cost savings, because it would be too expensive if each group or agency worked independently.

‘Fauna data collected over previous rounds of sampling the plot network have provided the strongest quantitative evidence for the widespread decline of small mammals across northern Australia,’ says Graeme.

‘This monitoring data was instrumental in identifying the need to develop a robust targeted research program to investigate the nature and causes of northern Australian mammal declines as a major theme in the federal government’s National Environmental Research Program.’

Prof Jeremy Russell-Smith of CDU, is the plot network’s other co-leader and says that the long-term research at the three parks network is essential in understanding how past and current fire regimes are impacting on the area’s ecology.

‘Our research has shown that areas which experience low intensity fires earlier in the dry season are more ecologically healthy than those impacted by late season severe fires,’ says Jeremy. ‘We now know that contemporary fire regimes, especially the high frequency of large, relatively severe late season fires,  have contributed to the declines in small mammals and fire-susceptible plant species. So we’re using these findings to re-think how we can deliver more sustainable and ecologically appropriate fire management programs.’

By prescribed burning areas of the parks early in the dry season, park managers are trying to reduce the extent of fires later in the season.

In addition to creating a more environmentally sustainable fire management program, the research is also helping us understand the benefits of landscape-scale carbon sequestration and savanna burning emissions abatement projects—especially on the vast majority of fire-prone northern savanna lands with limited economic pastoral and agricultural potential.

‘We are very keen to promote formal carbon-market savanna burning approaches in the Northern Territory, similar to those undertaken in Western Arnhem Land through the WALFA project, which have proven very successful environmentally, economically and culturally,’ says Jeremy.

Under the West Arnhem Land Fire Abatement (WAFLA) project ConocoPhillips pays around $1million a year to Indigenous ranger groups to undertake savanna fire management to offset the carbon emissions from its liquefied natural gas plant in Darwin Harbour. Since 2006 the project has abated over 100,000 tonnes of CO2 annually – equivalent to around 14,000 homes’ electricity use for a year.

‘Such projects provide traditional custodians and knowledge-holders with a very viable means to stay on the land they care for and earn an income from it in the new carbon economy.’

‘We should be seriously promoting projects like these as a way for Aboriginal people to receive an income for providing environmental services in savannas, mostly through the application of combined customary and contemporary knowledge systems,’ Jeremy says.

The ecology of the tropical savannas, the decline of fauna, and other research discoveries from LTERN’s Three Parks Savanna Fire Effects Plot Network are featured in TERN’s recently released book called Biodiversity and environmental change: monitoring, challenges and directions and its accompanying Policy Handbook.  A summary of the Three Parks Savanna Fire Effects Plot Network’s key discoveries and management recommendations from the Policy Handbook are shown in the image below. 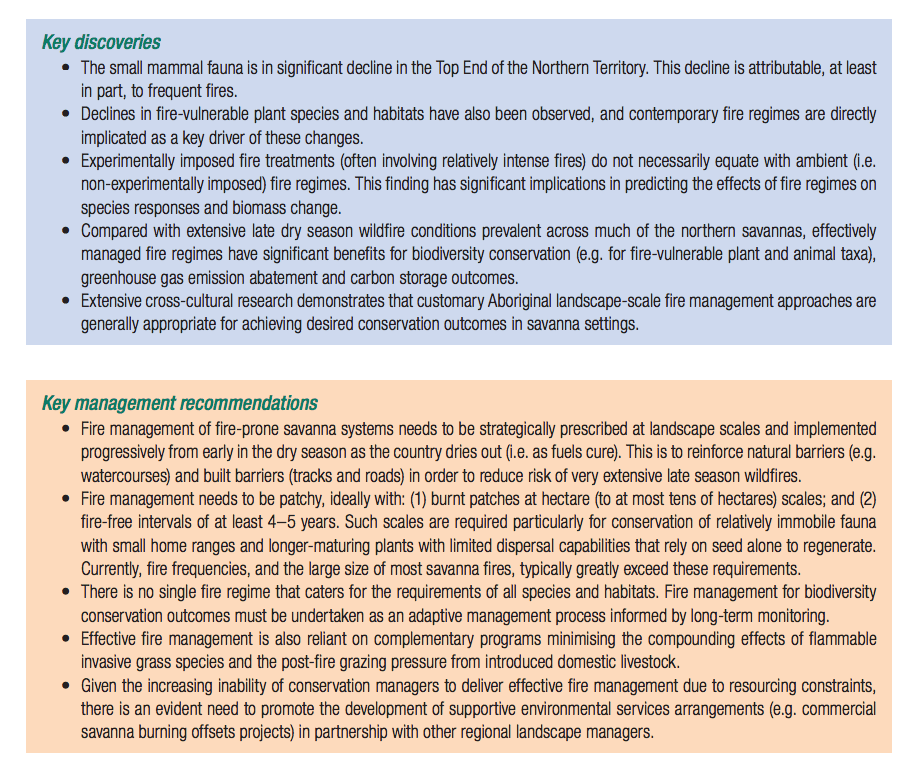