Ecosystem resilience to drought across the globe

TERN’s infrastructure is enabling increasing numbers of Australian researchers to participate in, and even lead, collaborative international scientific studies. Among them is Professor Alfredo Huete, from the University of Technology Sydney, who has been working with international colleagues to compare ecosystem responses and resilience to droughts across continents.

Their study, which was published in Nature last year, and subsequently covered by a number of international science news sites including Science Daily, showed that long-term on the ground field measurements of natural variability – including those being delivered through multiple TERN facilities – are vital for determining the impact prolonged drought has on vegetation productivity.

‘We wanted to investigate whether there were commonalities in the ways in which a range of terrestrial ecosystems responded to droughts on different continents, and whether this could provide any insights for management.’

The long-term datasets being delivered by TERN’s infrastructure enabled comparison with similar datasets from North America.

‘We found that while plants can adapt to extreme shifts in water availability, such as drought, their ability to withstand these extreme patterns has limits,’ Alfredo says. 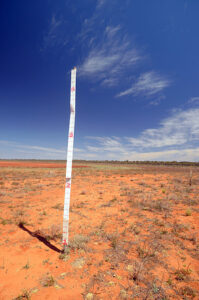 ‘Ecosystems are able to become more water efficient during drought, however, they eventually approach a water-use-efficiency threshold that will disrupt plant water use and severely limit plant production, or result in ecosystem collapse.

‘Importantly for us in Australia, this downturn is likely to begin in grassland ecosystems with important consequences to livestock-based food security, because these plant communities are particularly sensitive to the hot, dry conditions of prolonged warm droughts.’

Alfredo added: ‘Plants use water in much more complex ways than we thought! Our increased understanding of how ecosystems can adapt to avoid mortality during droughts could change the way we manage water in our landscapes.’

This research could be used to help land-resource and agriculture managers develop management strategies that incorporate dynamic changes in water availability linked to increasingly warm climates and extreme precipitation patterns.

The team is continuing to work with collaborators overseas on a number of global comparison projects to investigate agricultural and ecosystem responses to droughts, including groundbreaking ways to image and detect drought-induced plant stress from space.

While TERN’s infrastructure made Australia’s participation in these international projects possible, Alfredo notes that this is only the beginning.

‘Our long-term datasets and ecosystem monitoring programs are really quite limited and short-term compared to what is available to researchers in many parts of the US, Europe and China,’ he says.

‘We need to start pulling our weight internationally, and our capacity to collaborate on important projects like this will be significantly enhanced by expanding and maintaining TERN’s infrastructure and data-publishing activities.’