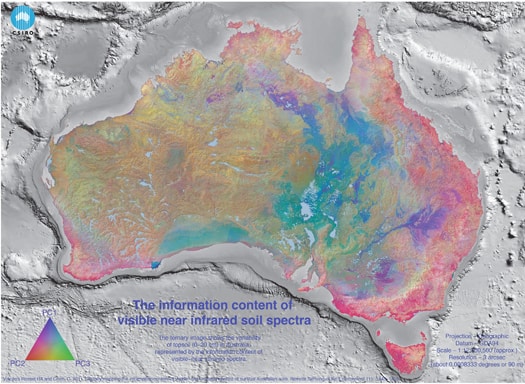 Soil variation across Australia as measured by near-infra red spectra (NIR) – an example of the TERN underpinnings for the new soil-carbon map. NIR is one of a suite of new soil-measurement tools which is increasing our ability to rapidly measure soil features, including carbon.

Australia has long had a vital interest in soil carbon. In some ways, it is the entry point to understanding soil health and the health of the ecosystem which circulates that carbon. Early carbon maps described this– but had limited use beyond that, although they did inform us that there is more organic carbon in our soils than in the vegetation and the atmosphere.

Our needs have grown beyond the capacity of the early maps. We now need a national carbon map to provide us with knowledge about our emissions, the extent to which we can and do sequester additional carbon, and the interaction between land management and carbon dynamics. That requires both full continental coverage and a mapping of the soil carbon present at the most important times of change (before grazing, before clearing and the progressive change since 1990, in line with carbon accounting for greenhouse gas management). Beyond the management of climate change, we need to maintain and improve the health of our soils – as the fundamental support for food security and the health of ecosystems. Soil carbon is an essential indicator of these.

The TERN soil facility, allied with a range of other initiatives, is evolving Australia’s existing carbon maps, an improved understanding of soil carbon processes, and site and land-management data to more effectively meet these complex needs.

So what makes an effective soil carbon map? It is much greater than the two-dimensional illustration we traditionally associate with maps, and is really a spatial information system which has the following features:

We don’t have a full picture of Australia’s soil carbon yet, but work has started and the picture is coming into clearer focus. The TERN facility is not building all of this alone. Other aspects of the research and development occur in projects funded by the Department of Agriculture, Fisheries and Forestry (DAFF), the Department of Climate Change and Energy Efficiency (DCCEE), the Grains Research and Development Organisation (GRDC) and CSIRO, and involve state and territory agencies, CSIRO and universities around the country. TERN, in particular, is investing in essential building blocks. These include nationally consistent historical data and new data on the nature of Australian soils and landscapes, new methods of soil analysis, and approaches to mapping soil carbon that make use of existing soil maps to take into account our collective prior knowledge on Australian soils. With these new data and the land management, carbon process and new sampling that the DAFF-funded national Soil Carbon Research Program has allowed, new spatially explicit soil-carbon maps are being produced and tested. The TERN soil facility is also improving its ability to estimate the model parameters that are needed in order to model soil carbon and land management (developed in recent years with DCCEE and CSIRO funding).

There is much left to do. We need to improve the collection of new data as in some regions we have poor base data. We need to develop an effective soil-monitoring network to monitor change, and we have to make better connections to land management.

The evolution continues: the first release of the new soil-carbon map for Australia will occur within a year, and substantial improvements to these should be available the following year.