From the productive agricultural landscapes around the headwaters of the Murray River, to the Victorian high country and Alps, through to the tall eucalypt forests around towns such as Kinglake, north-east Victoria’s diversity of interconnected ecosystems support a similarly diversified economy.

Key industries for the region include tourism, forestry and agribusiness, and key environmental issues include fire and climate change. Ecosystem science – and the research infrastructure provided locally through TERN – is making a considerable contribution to the current and future sustainability of these industries and the region.

For example, science is helping the region’s farmers and land managers gain greater insights into their wetlands, thanks to recent collaborative research supported by TERN’s Australian Centre for Analysis and Synthesis (ACEAS). Dr Michelle Casanova of the University of Ballarat has compiled information from researchers and management agencies across the country to generate the first detailed database of plant species’ occurrences for wetlands and riparian zones.

‘Around the Ovens River in north-east Victoria, for example, the database can help us to understand the condition of these plant communities, and their likely responses to changes in salinity, water regimes, and nutrient levels,’ says Michelle.

‘We can start to answer questions such as “What are the water requirements of riparian wetlands, based on the native plants that live there?”, and “How much water do the plant communities need, and when?” This information will help farmers, graziers and catchment managers make more informed decisions about issues such as weed control, grazing in wetlands and environmental water buybacks.’

The north-east region’s Alpine National Park is the largest and one of the most magnificent in the state, and sits at the head of the catchments of some of Australia’s major river systems. The high numbers of visitors to the park and associated snowfields at places like Mt Hotham and Falls Creek also contribute to the region’s economy. Ensuring that this important economic and environmental resource is sustainably managed is therefore a top priority in the region.

Locals are in luck: six decades of scientific monitoring effort has been invested in understanding how Victorian alpine ecosystems work and, importantly, how they respond to different kinds of disturbance, such as fire, grazing, development, invasive species and climate change.

‘We’ve learned a lot about basic ecosystem processes such as vegetation dynamics, and those findings have had a major influence on decision-making in the establishment and ongoing sustainable management of reserves such as Alpine National Park,’ he says.

‘We have worked for many years to understand long-term ecosystem dynamics and to develop practical revegetation techniques. This knowledge has been applied in conservation management in national parks and in ski-resort management. For example, what we know about vegetation dynamics has been used to help reduce some of the damage caused in the creation of ski slopes. Big ski resorts like Mt Buller and Mt Hotham have used our understanding of the population structure, genetics and reproduction of endangered species such as the mountain pygmy possum to improve the success of their conservation programs.’

‘We face a number of land-management challenges in which we have to balance the needs of the business, safety and environment,’ he says.

‘Having robust science on which to base our weed or fire management programs means we have much greater confidence that the effort we put in will deliver the desired outcome in an efficient way.’

Of course, scientific results, no matter how robust, are not always politically palatable. Dick found himself thrust into the middle of a controversial regional argument when the Victorian government fulfilled an election promise to reintroduce cattle grazing in Alpine National Park in 2011.

‘The science, based on sixty years of monitoring, is clear: there is no evidence that grazing by cattle or sheep is beneficial to these ecosystems, or reduces fire risk. In fact, there is compelling evidence that grazing has many negative effects on alpine ecosystems and will impair their ability to recover from disturbances such as fire, drought or higher temperatures,’ Dick says.

Another TERN-associated researcher not shy of causing controversy in the region is Professor David Lindenmayer of ANU. He has been working in north-east Victoria for over 30 years, as a teacher, a forestry scientist and, currently, as science director of TERN’s LTERN. David estimates that over the past three decades around 15,000 volunteers have travelled to his long-term survey plots in the mountain ash forests between Kinglake and Marysville to help with monitoring. 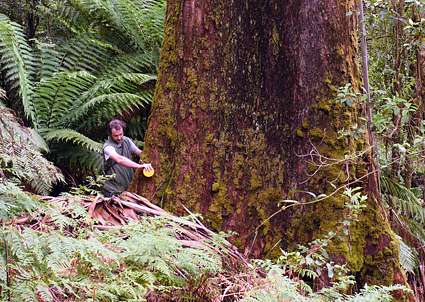 ‘Because we’ve learned a huge amount about how these extraordinary forest ecosystems work, we can suggest scientifically credible improvements to management strategies so the forests deliver the maximum possible long-term benefits to local communities,’ David says.

‘Better alternatives are available and it’s imperative for the future of the industry, of the region, that forestry practice starts to better reflect the science, and plans are made to secure the economic future of all the people who work in the industry locally.’

The changes to harvesting policies announced by VicForests in May 2013 are a start, David agrees, but don’t go nearly far enough.

Importantly, science is opening doors to new social and economic opportunities for the region.

‘For example, we now know that these are the most carbon-dense forests in the world, and we understand enough about how carbon cycles through the system to manage for high carbon sequestration rates and long-term storage,’ he says.

‘Under an emissions trading scheme, and informed by science, the region’s mountain ash forests could become an enormous cash cow for the state of Victoria.’

Among the many casualties of the region’s 2009 fires was some of Professor Jason Beringer’s research infrastructure at Wallaby Creek near Kinglake. Even from his Monash University office he could tell the moment his four-year-old flux tower succumbed, because the remotely transmitted data streams from its monitoring instruments suddenly failed. Thanks to support from TERN’s OzFlux facility, the tower was replaced by mid-2010 and is again fully functional – you can check out what it’s measuring online right now. 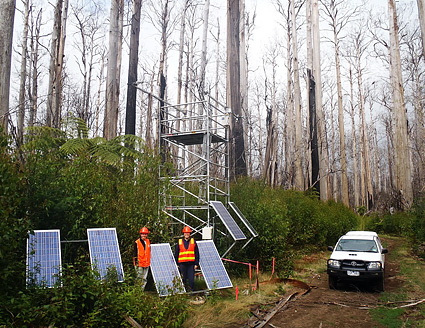 ‘Originally, we were aiming to understand the interactions between carbon, water and energy cycles in old-growth mountain ash forests, to be able to predict the effects of future environmental change,’ says Jason.

‘Now, because the fires went right through our study site, we can research those interactions in recovering forests as well. Given that fires typically occur every 400 years in these forests it is a once-in-a-multigenerational opportunity to examine how they regenerate.’

Science-based knowledge is already contributing to the region’s social, economic and environmental recovery from the devastating effects of the 2009 fires.

‘Because of this local research infrastructure and effort,’ says David, ‘we have a much more detailed understanding of how the ecosystem recovers from fires, and what can be done to help that process. And the science is also helping recover and develop the local nature-based tourism industry.’

For example, later this month the federal environment minister will be formally opening one of the region’s newest tourist attractions in the forest near Healesville, the Kalatha Giant Tree Boardwalk.

It’s not just tourists who think the region’s mountain ash forests are special: they have been identified by researchers associated with TERN’s AusCover facility as one of eight remote-sensing validation sites nationwide. By simultaneously acquiring satellite, aerial and ground datasets at each of the validation sites – which include old-growth forest at Watts Creek near Mt Donna Buang – the team is able to recalibrate the standard algorithms that interpret satellite or aerial imagery for local conditions.

Team member Dr Mariela Soto-Berelov, of RMIT, explained that this research project was delivering more accurate and useful satellite imagery for the region, and that the resulting improved imagery is freely available to anyone with interests in land management, land-use change or forest condition, among many other applications.

‘The work at Watts Creek is also contributing to the good practice guidelines that we’re publishing later this year, a technical how-to manual for calibration and validation of remotely-sensed data products for Australia,’ she says. 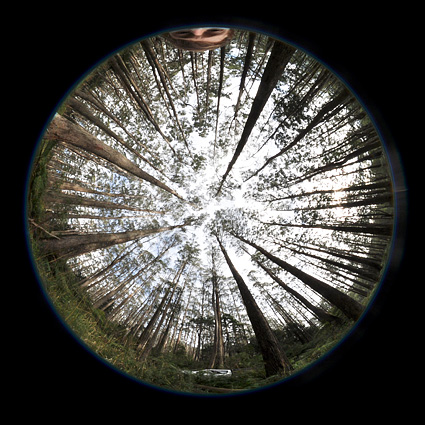