Greater than the sum of its parts: TERN’s synthetic power

The maturity of TERN’s ecosystem research infrastructure, and the many ways in which diverse stakeholders are already using it to achieve new things, was very apparent among the 100 or so presentations at our 2013 TERN Symposium. Also apparent – and even more exciting – was the emerging synthesis that is occurring: the novel, cross-disciplinary combinations of resources, ideas and capacity that are necessary if we are to make leaps in understanding that were not previously possible.

Such syntheses are convincing demonstrations that TERN’s value is truly greater than just the sum of its parts. TERN’s ACEAS facility is charged with bringing this potential to the fore by fostering exactly these kinds of synthetic leaps, and among the five ACEAS groups working on North Stradbroke Island this month were two particularly interesting examples.

Towards a nationally consistent risk assessment process for Australia’s ecosystems

Although there has been significant progress in assessing and listing threatened ecosystems at the national, and state and territory levels in Australia, there is no current nationally-integrated and comprehensive list of threatened ecosystems. The proposed IUCN protocol for red-listing of ecosystems presents an opportunity to harmonise state and national systems, and would permit more effective management of trans-jurisdictional threats. Such harmonisation would mirror listing processes for species within Australia, which in most states and nationally are based on the protocols for the IUCN Red List of Threatened Species.

The group that assembled to consider this opportunity was composed of senior policymakers from most Australian jurisdictions, plus New Zealand, and researchers from TERN’s LTERN and AusCover facilities, as well as others called in because of their specific scientific expertise. After a few days of data analyses and discussion, the team has decided that alignment with the proposed IUCN protocols would require minimal adaptation of current practice. Mr Matt White, from DSEWPaC, explained why it was important to Australian governments.

‘It enables us to confirm that the new IUCN-proposed criteria are comparable to existing ecological community listing methods and thresholds,’ Matt said.

‘It seems likely that future integration of these criteria into existing listing processes would help fulfil a key recommendation of the independent review of the Environment Protection and Biodiversity Conservation Act to harmonise listing processes across jurisdictions.’

The group has begun drafting two professional papers, and is planning a plain-English policy-harmonisation guide to the proposed IUCN protocol that aims to ease the path towards a nationally consistent method for ecosystem risk assessment in Australia.

At the same time and just a few hundred metres away, one of the most diverse working groups yet convened by ACEAS was busy making surprising synthetic leaps across the divide between ecosystem science and public health.

The working group brings together a team of ecologists, remote-sensing researchers, and medical practitioners concerned with hay fever and asthma. It is investigating some of the differences between and drivers of pollen production in Australian and New Zealand cities, and the impacts of climate on shifts in the timing of the start or severity of the grass-pollen season. This is of interest for a number of reasons. One is that the incidence of hay fever, as measured by antihistamine sales, is known to increase markedly in wet, warm years (compared to drought years) because these conditions promote the growth and flowering of grasses. Grass pollen is a common cause of hay fever, and triggers asthma, especially among children. Another is the more alarming phenomenon of ‘thunderstorm asthma’: severe thunderstorms occurring during the grass-pollen season may trigger an epidemic in asthma admissions to hospital.

Principal Investigator Dr Janet Davies, from the University of Queensland, said there was an obvious need for a nationally coordinated pollen-monitoring program in Australia, like those already running in Europe and North America.

‘Although publicly available pollen forecasts are available here, only few sites have an active pollen-monitoring program. Consequently we lack a robust understanding of what’s going on in terms of pollen production dynamics across Australia. We have an opportunity now to improve our understanding, and thereby improve the situation of people with pollen allergy, who could use this information to better manage their health,’ Janet said. 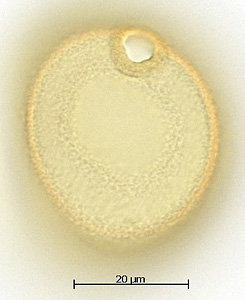 Grass pollen (such as this Paspalum sp.) is
the most common cause of hay fever and an important trigger for asthma. Image courtesy
of the Australasian Pollen and Spore Atlas) 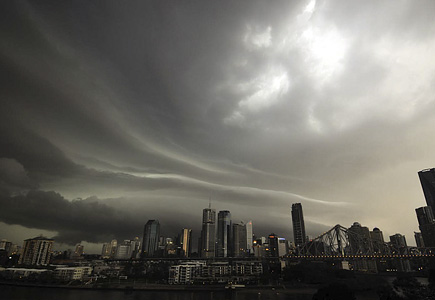