More than 85% of Australians live, work and play on or around our coasts and estuaries. As a result, these complex and dynamic ecosystems are under significant pressure from human use and activities. Although some environmental monitoring programs exist, they are often not coordinated, and many ecosystem interactions between biophysical factors, time, weather conditions, management actions and changing climate are still poorly understood.

TERN’s Australian Coastal Ecosystems Facility (ACEF) has begun to supply some of the hard and soft research and data infrastructure necessary for those attempting to more effectively manage our coastal and estuarine ecosystems.

The Coastal Research Portal has been jointly delivered by TERN and CSIRO (along with around 30 other partners) as a way of improving access to dispersed coastal datasets.

‘We realised that local councils had few ways to access the range of coastal research available, even though they often needed this information to evaluate proposals and make decisions for their communities,’ says CSIRO’s Dr Andy Steven, the Director of ACEF.

The initiative has been well-received by stakeholders, including the Chairman of the National Sea Change Taskforce, Mr Barry Sammels.

‘There is no doubt this web portal will be of enormous practical benefit for everyone who is involved in coastal planning and management,’ Barry said at the launch of the portal in March.

Datasets from at least 80 projects are already available and there are up to 100 unique visitors a week.

Among other infrastructure projects, ACEF is working to fill an important gap in the management of sentinel marine species, through the development of a National Marine Turtle Database. The aim is to provide a mechanism for the national coordination of turtle data management and reporting across Australia. Currently, state and Commonwealth governments and industry monitor turtles using a range of methods, and the resulting datasets are managed in separate databases by separate organisations, and are not routinely or easily combined for analysis and reporting at a national level for a variety of purposes and uses.

ACEF is using ALA’s Biological Data Recording System (BDRS) to start delivering a national view of turtle data. The BDRS is a flexible, configurable data system which enables the storage of field data from a variety of sources. Watch this space for further news about the National Marine Turtle Database, which is planned to be publicly available by June 2013. 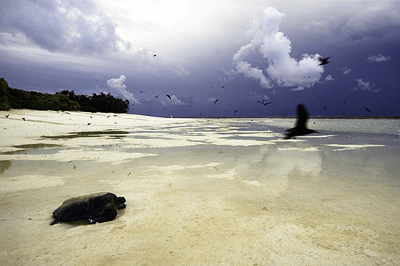