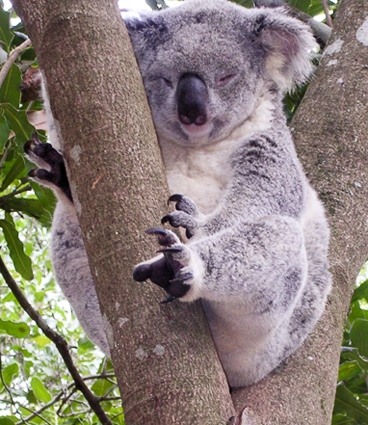 Sightings of koala droppings is a much more reliable way of counting populations of koalas than sightings of the animal itself, researchers have found.

One of the researchers involved was Associate Professor Jean-Marc Hero, the Deputy Director of the Environment Futures Centre at Griffith University. He said it was very difficult to monitor shy creatures that live at low densities. The difficulty is exacerbated when their habitat becomes fragmented.

‘We found scats on 66% of the 33 plots we surveyed. At the same time, we saw only two koalas during the daytime, and none when spotlighting the same plots at night,’ Jean-Marc says. ‘This tells us that the scat sampling is an excellent technique for detecting koala activity in populations with low densities. Karawatha is an isolated fragment of forest, surrounded by suburbs and rural residential development. We have showed that this method is a great way of mapping the distribution of koalas in a peri-urban area, where Queensland koalas are most threatened.

‘Repeated scat surveys will enable managers to also identify movement patterns and likely shifts in distribution in response to fire and changes in climate.’

The koala is listed nationally and in Queensland as vulnerable to extinction in south-east Queensland. Numbers are declining mainly because of urban development fragmenting and isolating populations, being hit by cars or attacked by dogs, and the prevalence of the disease chlamydia, which the koalas are prone to when stressed.

‘Because species such as the koala are difficult to see, we haven’t been able to give reliable estimates of their numbers. When we can’t do that, it becomes very difficult to answer management questions such as where the koalas are, how much area needs to be set aside for their protection, and what size of reserve they need.’

The systematic sampling of koala scats allows researchers to measure and monitor koala populations, a critical tool for empowering managers because it allows measurements of koala activity to be replicated, and this gives data about how well koalas are surviving in south-east Queensland.

Karawatha Forest Park is a long-term ecological research site in TERN’s SEQ Peri-urban Supersite, and the research is logged in the Australian Supersite Network’s data catalogue.

The research will be published soon.