Imagine if each soil type had a barcode. You could scan the soil in your backyard and find out why the leaves on your lemon tree are turning yellow. Farmers could scan their paddocks to get a fix on data that would help them improve yields. Researchers could scan their plots to understand why particular flora and fauna exist where they do.

Sound far-fetched? Maybe the scanning part is, but not the barcoding of soils. A project is under way that is doing just this, by exploiting the synergies between infrastructure projects funded by the National Collaborative Research Infrastructure Strategy (NCRIS). One of these projects is TERN.

The federal government created NCRIS in 2006 to compound the power of Australia’s research sector by providing access to high-quality, operational research infrastructure facilities.

When the strategy was announced, the then Minister for Education, Science and Training, The Hon. Julie Bishop, MP, said that the NCRIS investments were ‘essential to build our national capacity to generate knowledge and use it to advance our economic, social and environmental objectives’.

This is just what TERN has been doing. TERN was identified as one of NCRIS’s critical ‘platforms for collaboration’, and we’ve successfully supported the development of collaborative approaches to ecosystem research in Australia. And with the help of our sibling NCRIS platforms, we’ve gone a step further: collaborations between the platforms are generating useful emergent products that were unfeasible just a few years ago. The collaborations add value in unexpected ways, and they also highlight interdependencies – so the loss of any one of them could impair the potential and effectiveness of the others.

The project to barcode Australia’s soils, called Biome of Australia Soil Environments (BASE), is being used to create a national dataset on soil. BASE is a collaboration between NCRIS-funded partners TERN, Bioplatforms Australia, The Atlas of Living Australia (ALA), and the Australian National Data Service, with CSIRO and a host of other partners including federal and state governments, universities, NGOs and industry groups.

The BASE project will collect metagenomics measurements across a range of sites in order to create a reference map of Australia’s soils. Metagenomic analyses will quantify the community that lives within the soil (bacteria, fungi etc.) as well as the physical characteristics (pH, moisture etc.). The datasets will be made publicly available and can be linked with other measurements and data such as overland surveys, meteorological data and geological information to enhance the ecological knowledge of the Australian continent and contribute to land-management strategies.

Three TERN facilities are involved in sampling soil for BASE: AusPlots, the Australian Transect Network and the Australian SuperSite Network. So far they have contributed data from over 50 sites across Australia. Once processed, at least some of these metabarcoding data will also be available through TERN Eco-informatics’ newly released Australian Ecological Knowledge and Observation System (ÆKOS) and the data-visualisation tool Soils to Satellites. 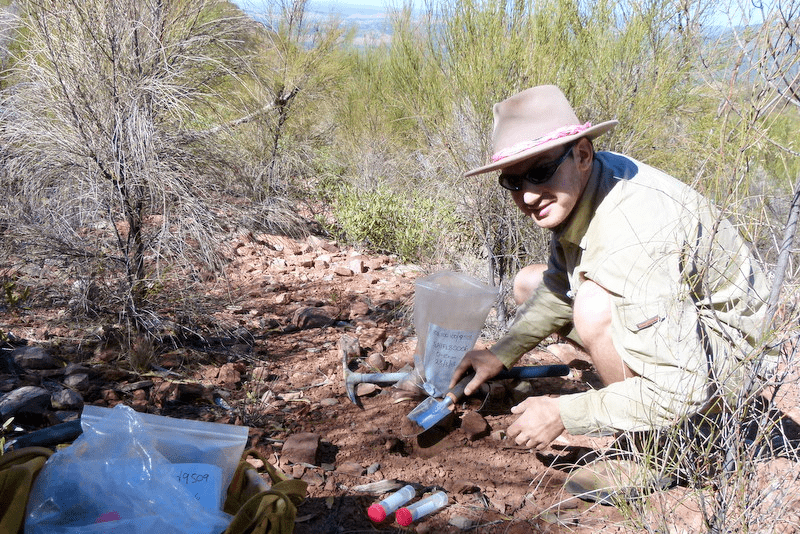 Soils to Satellites up and running

Sit down, log-in and discover, visualise and analyse Australia’s ecosystems like never before. The tool, Soils to Satellites(S2S), has been completed by TERN’s Eco-informatics facility, ALA and ANDS.

The tool brings diverse datasets together into an easy-to-use interface that enables visualisation and comparison.  Available datasets include: ecological data, collected by AusPlots and TREND and supplied via ÆKOS; metabarcoding data, via the BASE project; remote-sensing data, from AusCover; and spatial and biodiversity data from ALA.

The Soils to Satellites tool enables researchers to explore and view relationships between different types of data at the same site in ways that were not previously possible. For example, researchers are able to display layers of Australian environmental data such as elevation, temperature and soil type, then ‘drill down’ to compare vegetation and soil community layers, and perform subsequent analyses across the combined datasets.  The Australian Bureau of Agricultural and Resource Economics and Sciences (ABARES) and the CSIRO are early adopters and are already downloading AusPlots ground cover and soil data from S2S and additional contextual data for validation from ÆKOS.

Since the start of NCRIS, TERN has had a strong relationship with fellow capability the National eResearch Collaboration Tools and Resources (NeCTAR) and Research Data Storage Infrastructure (RDSI) Project. NeCTAR infrastructure is used for hosting data portals from five TERN facilities and large TERN data collections are housed in the RDSI storage infrastructure.

Collaboration with NeCTAR goes one step further for TERN’s Eco-informatics facility. The facility secured funding from NeCTAR to build an online self-service tool, called SHaRED, for the submission, harmonisation and retrieval of ecological data.

SHaRED provides data submission capability to all researchers, and fully integrates with the ÆKOS data portal thereby expanding both access and the number of datasets in ÆKOS. Not only can researches submit data but can also create comprehensive metadata records, which supports further re-use and data citation. Parks Australia and some members of TERN’s ecological research community are early adopters and are about to submit datasets into ÆKOS through SHaRED.

Management across the catchment–coast–ocean continuum remains one of the greatest natural resource management (NRM) challenges still to be addressed in Australia. Increasingly attention is being given to the consequences of, and resilience to, extreme events such as floods that can profoundly affect the geomorphology, biogeochemistry and ecology of these environments. A better understanding of these will give communities and governments the tools to prepare for natural emergencies.

A new project, jointly sponsored by TERN, CSIRO and ANDS, is using infrastructure delivered through the ANDS-funded SEQuITOR program to explore and visualise the effects of the 2013 south-east Queensland floods across the Logan and Albert catchments and into Moreton Bay. Tools developed during this project will be used in future studies of flood events in Australian catchments.

ACEF is also partnering with state governments, local councils, the CSIRO, the Australian Ocean Data Network (AODN), the Integrated Marine Observing System (IMOS), ANDS and ALA to collect and facilitate open access to coastal ecosystem data for use in policy, planning and management decision-making about extreme events on coasts.