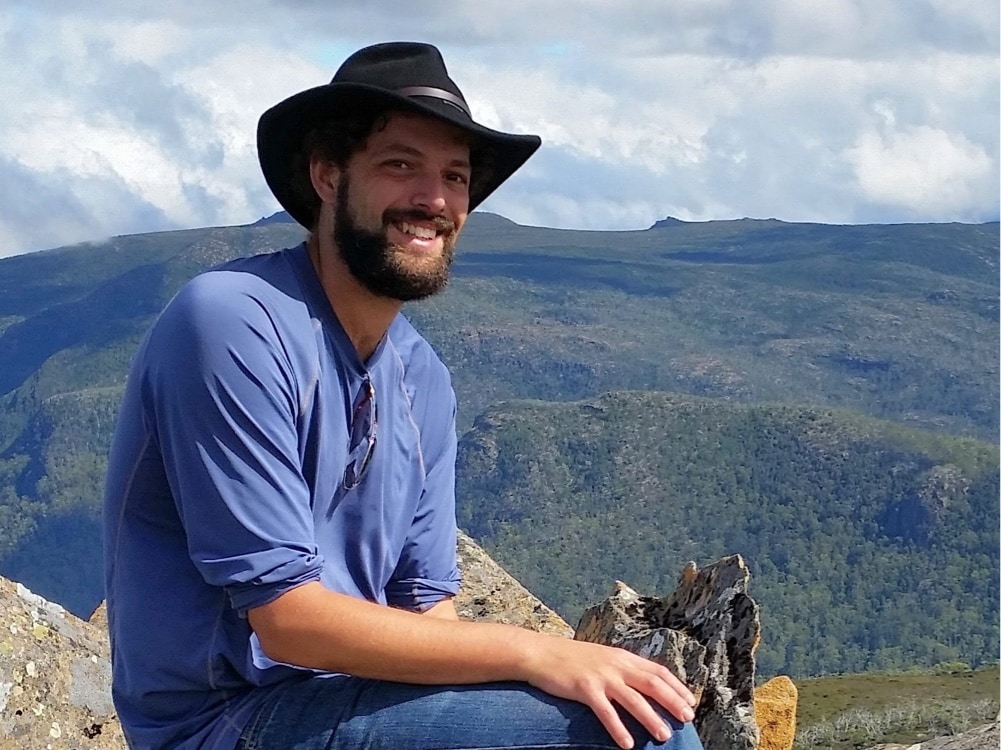 The 2016 Tasmanian bushfires have been described as the worst crisis in decades for world heritage forests.  Seventy fires that started by a severe dry lightning storm on 13 January burnt more than 124,000 Ha over a month and a half—affecting about 2% of the Tasmanian Wilderness World Heritage area—and have been linked to human-induced climate change by recent research. As the maps on the news portrayed, fires burnt across western Tasmania affecting a range of vegetation types including tall wet forests such as those at the TERN Warra Tall Eucalypt SuperSite.

Even while the fires were still burning in other parts of Tassie, University of Tasmania Biological Sciences PhD student James Furlaud was camped amongst the tall eucalypts at the Warra SuperSite collecting post-fire data on forest fuel loads.

James collects data on fuel load at a monitoring plot located at the Warra SuperSite—part of TERN’s Australian SuperSite Network—that will be used to estimate the surface, elevated, and bark fuel loads, and a number of qualitative measures that are commonly used by fire managers

James, who is partly supported by the Bushfire and Natural Hazard CRC, has done fuel load surveys at eight monitoring plots located at the Warra SuperSite—part of TERN’s Australian SuperSite Network—using a methodology based off of the TERN AusPlots Forests methodology that’s openly available via the TERN website.

“The sampling is designed primarily to estimate the surface, elevated, and bark fuel loads, but also makes a number of qualitative measures that are commonly used by fire managers.  I can then model these fuel loads as a function of time since previous fire.  This will create fuel accumulation curves that are compatible with current and future fire behaviour prediction models.”

“Behaviour models predict fuel load as a function of time since previous fire.  This is why the TERN chronosequence plots at the Warra long-term ecological research site are so valuable: they allow me to simultaneously sample fuel loads across a range of differently aged forests and quantify how fuel loads increase as a forest ages.”

Four of the eight plots James surveyed overlap with AusPlots. By sampling at these sites James is able to use nationwide AusPlots data to compare how fuel loads vary across both chronological and ecological gradients. Such comparison will allow James to examine how fuel accumulation rates might change with climate change.

The ultimate goal of this project is to develop improved bushfire behaviour prediction models.  This will allow for updated risk assessments, an improved ability to evaluate fuel management regimes, and better fire suppression decisions.

James’ supervisor, Professor David Bowman, says “Given that such destructive fires are likely to become more common in Tasmania under a warming and drying climate, James’s research will form an important part of improving our fire risk assessments, fuel management regimes and increasing the capacity to attack fires quickly and efficiently.  It is research like this that will help better manage future fire crises in Tasmania and in other forest environments around Australia.”

TERN is pleased to support and facilitate such tailored, management-outcome-focussed research and we hope researchers using our network will continue to answer key scientific questions for decades to come.

Keep an eye out in future editions of TERN eNewsletter to hear more on James’ research and the development of improved bushfire behaviour prediction models for Tasmania.