Site of the Month: Ashley Dene 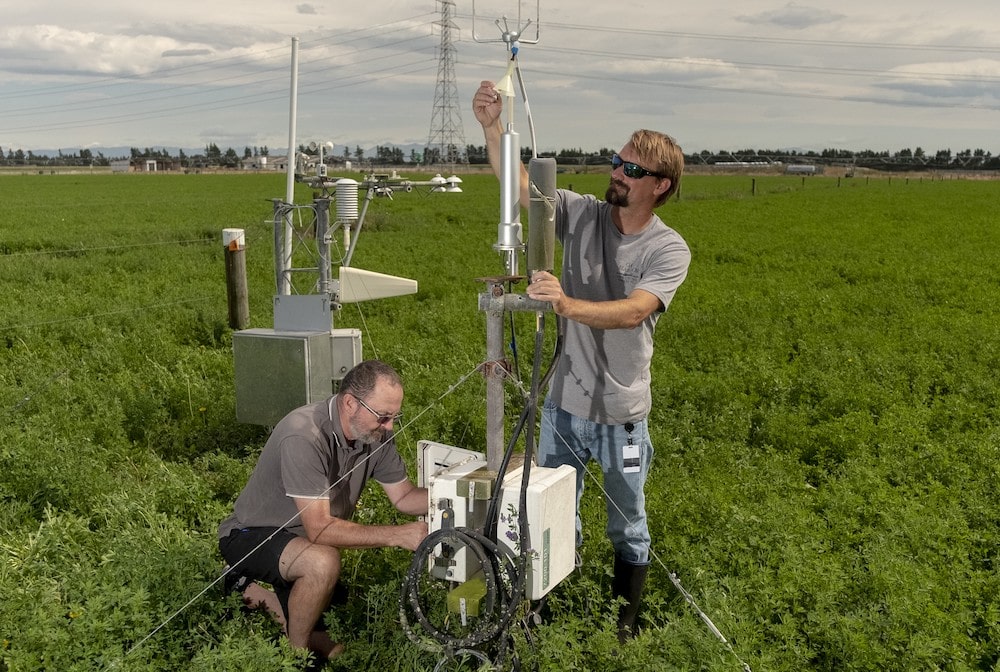 For this month’s site feature, let’s journey to Te Waipounamu, the South Island of New Zealand. The Ashley Dene OzFlux site is located in one of New Zealand’s large dairy regions, on the Canterbury Plains, and its data are essential contributions to research projects on the carbon, water and nitrogen exchange of dairy forage systems.

The Ashley Dene OzFlux site was established in 2015 at Lincoln University’s Ashley Dene Research and Development Station, 30 km south-west of the city of Christchurch. This station has been owned by Lincoln University for over 100 years and covers 355 ha of land. It is used for agricultural research and teaching while also run for commercial milk production.

The site was established while several paddocks on the farm were converted to lucerne (Medicago sativa L.), with some of these covered by a pivot-irrigator system that was established at the same time. To be able to assess the effects of contrasting management approaches on carbon and water budgets, the researchers opted for a paired-site approach, with identical instrumentation set up in irrigated lucerne and, 700 m away, in non-irrigated lucerne.

The measurements over lucerne operated continuously for almost five years. In 2020, a new project was started, on the greenhouse-gas budgets of mixed-species pasture, which is described in the final section of this article.

The intensity and extent of dairy in New Zealand has increased in the past 30 years, with over 800,000 ha of irrigated land supporting the industry. Coupled with this intensification is concern for the impact these land use practices have on soil carbon stores, ecosystem water use, nutrient leaching and net greenhouse gas emissions.

In the Canterbury Plains region, where Ashley Dene is located, annual nitrate leaching is estimated to have doubled between 1990 and 2010 where irrigation of vast areas of the stony alluvial soils poses a risk to both surface and groundwater quality.

The role of flux towers in quantifying ecosystem-scale fluxes from these intensively managed agricultural systems will contribute towards improving management practices not only in the Canterbury Plains region, but for the dairy industry in New Zealand and globally.

Is lucerne a means of reducing carbon and nitrogen losses from farms?

Lucerne is promoted as an alternative forage crop that can survive extensive summer drought periods, as they are common in the South Island’s eastern and central regions. Lucerne was established at Ashley Dene in spring of 2015 and eddy covariance measurements began soon after.

One flux tower was installed over irrigated lucerne and another over non-irrigated lucerne to quantify the carbon and water budgets of these two managed ecosystems. In addition, large drainage lysimeters were added in 2016 to measure the leaching losses of carbon, nitrogen and phosphorus from the soils.

“There are very few sites around the world where matter balances of an agricultural system have been measured so comprehensively over several years, including exchange with the air, flows in the soil and exports and imports associated with farm management activities.

For carbon and water balances, we have achieved quantification of all major terms. For nitrogen, we did not have the resources to include gas exchange of the lucerne, but we have recently acquired an instrument enabling us to measure ammonia and nitrous oxide fluxes in future projects.

We are looking forward to having our comprehensive dataset used for the modelling of a variety of management scenarios, which will give further guidance on how to optimise farming practices for reduced environmental impacts.”

Some key messages that resulted from this work include the following:

Annual cumulative net ecosystem carbon balance (NECB) of irrigated and non-irrigated lucerne at the Ashley Dene OzFlux site, from July 2016 to June 2020, restarted from zero every July 1st. NECB includes the net exchange of carbon dioxide, biomass export from harvest and grazing, inputs from effluent and dung, and leaching of dissolved carbon. Grazing (G) and harvest (H) events are marked on the figure, as is the herbicide spraying (S) to kill the irrigated lucerne and begin conversion to mixed-species pasture. NECB values above 0 represent net carbon gains of the system and NECB values below 0 represent net carbon losses (After Laubach et al 2019, modified to include more recent data.)

Exciting activities on the horizon for the Ashley Dene OzFlux site

During April – while New Zealand was in lockdown because of the COVID-19 pandemic – the irrigated lucerne was converted to pasture, in the northern half of the area with a mix of five species and in the southern half with ryegrass and white clover only. Fortunately, the researchers had already managed to upgrade the existing eddy covariance site in January 2020, with the installation of a multi-gas analyser (dual-laser spectrometer) capable of measuring carbon dioxide, methane, nitrous oxide, water vapour, ozone and ammonia simultaneously, in order to obtain direct, time-resolved, measurements of the pasture-atmosphere exchange of all major greenhouse gases.

While COVID-19 forced the researchers to work from home through the conversion and establishment period of the new pasture, they could watch the new instrumentation operate flawlessly, side-by-side with the original one (for carbon dioxide and water vapour fluxes).

In August 2020, measurements were discontinued at the non-irrigated lucerne and the instrumentation moved into the irrigated ryegrass-clover pasture. This reinstates a paired-site approach for recording the carbon dioxide and water vapour fluxes of the two pasture types, while for the other gases the researchers rely on a split-footprint approach applied to the data from the multi-gas analyser system.

One of the five species in the mixed pasture is plantain (Plantago lanceolata L.) which, by mechanisms not fully disentangled yet, has elsewhere shown promise to reduce nitrous oxide emissions from the pasture soil. Key aims of this research are to confirm such a reduction at the paddock scale and to assess whether mixed-species pasture enhances the carbon balance over ryegrass-clover pasture (which would be a co-benefit) or reduces it (which would be a trade-off). A similar experimental setup exists at the Troughton Farm site, operated by the University of Waikato, where dairy farming relies on natural rainfall year-round.

Johannes is excited that these aligned projects will further the collaboration of the two groups of researchers, working at the cutting edge of micrometeorological applications (with the split-footprint approach) while also aiming for impact from obtaining results that will allow sound advice about whether mixed-species pastures offer net benefits to reduce greenhouse gas emissions.

Irrigator and research equipment at the Ashley Dene OzFlux site in early 2020: the new eddy-covariance system on the right, with multi-gas analyser in the white box (front of picture), the original eddy-covariance system in the centre, and ancillary weather-station instruments on the left (credit: John Hunt)