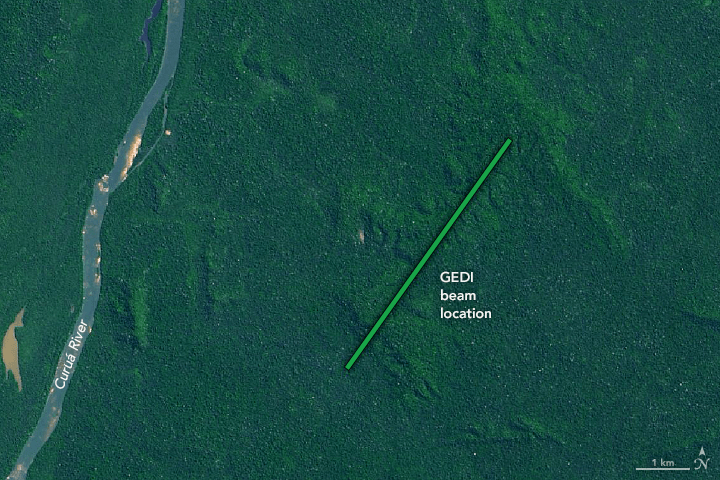 Europe’s, America’s and India’s space agencies are set to take a giant leap for ecosystem science: monitoring Earth’s most complex processes and measuring and mapping the planet’s forests in high-resolution 3D. TERN is playing a vital role in these missions by providing the on-ground observation infrastructure and data required to calibrate, validate and improve the accuracy of these global bio-geophysical satellite data.

When it launches later this year, NASA’s Global Ecosystem Dynamics Investigation (GEDI) will be the first space-borne laser instrument to measure the structure of Earth’s tropical and temperate forests in high resolution and three dimensions.  Data from GEDI will be used to measure and monitor change to the world’s vegetation and its impact on carbon storages and biodiversity.

This giant leap for ecosystem science wouldn’t be possible without some equally high-tech, but more down-to-Earth, data collection. To validate the space-borne LIDAR data collected by GEDI, similar ground and airborne-based LIDAR data are required.

Dr John Armston of the GEDI Science Definition Team at the University of Maryland has been working with TERN’s collaborative partner at the University of Queensland, the Joint Remote Sensing Research Program (JRSRP) to collect airborne (ALS) and terrestrial laser scanning (TLS) data around Australia including selected TERN SuperSites for calibration and validation of GEDI algorithms and data products.

“So far we’ve collected and made available TLS and biomass plot data from eight TERN SuperSites,” said Dr Armston.  “Together with the ALS data, the plot level data we’re collecting across a wide range of major Australian biomes, such as Queensland’s dry eucalpyt forests or Tasmania’s temperate wet forests, play an important role in making sure that GEDI’s southern hemisphere data are valid and accurate.”

“There are very few sites in the southern hemisphere where airborne and ground-based scans have been collected together with traditional inventory data across a range of biomes, so the TERN sites fill an important information gap for NASA.”

Radaring in on the Earth’s most complex processes

Unlike GEDI, which uses light to monitor the Earth, the NASA-ISRO Synthetic Aperture Radar (NISAR) space-borne instrument will use radar sensors working in microwave wavelengths to observe and take measurements of some of the planet’s most complex processes, such as changes of vegetation biomass at the seasonal to annual cycles, ecosystem disturbances, ice-sheet collapses, and earthquakes.

Despite their differences in approach; underlying technology and required processing, GEDI and NISAR have one important thing in common, they both require on-the-ground data for validating the accuracy of their outputs.

Dr Sassan Saatchi of NASA, who is organising the NISAR mission ecosystem science products on forest biomass jointly with the Indian Space Research Organisation (ISRO), is working with Australian-based researchers, including John, to collect the required data at TERN sites around the nation.

“We’re planning on collecting airborne laser scanning [ALS] data at a number of TERN SuperSites and at TERN’s smaller one-hectare ecosystem surveillance monitoring sites,” said Dr Saatchi.  “We need data across a variety of biomes, so the large number and excellent distribution of TERN sites makes this possible.”

“Even though NISAR doesn’t launch until 2021 at the earliest, the ALS data we collect at the TERN sites are vital for pre-launch preparation activities within the next year.”