Study focuses on movement of carbon in estuaries 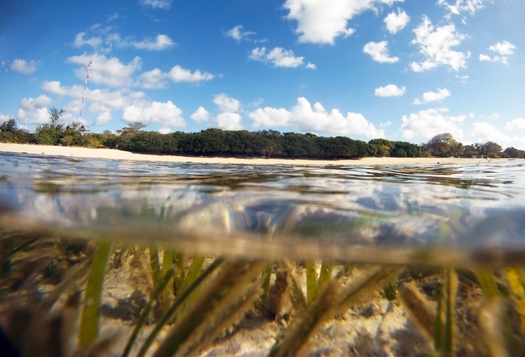 Coastal ecosystems are likely to be significant carbon sinks for Australia.

We’re starting to come to grips with carbon dynamics on land, but what’s happening in our rivers, estuaries and coasts? Are they carbon sinks or sources, and how do human activities such as urbanisation affect their carbon stocks and flows?

TERN-funded researchers at the SEQ Peri-urban Supersite, in association with CSIRO and many other partners, are taking the first steps towards answering some of these questions in the Logan and Albert estuaries in south-east Queensland. They are investigating and measuring the sources and concentrations of dissolved inorganic and organic carbon, and assessing how they are assimilated into estuarine food webs. They’re also looking at historical changes to the carbon dynamics of the system, and evaluating how continuing urbanisation may be affecting the carbon dynamics and estuarine productivity.

Preliminary analyses of their data reveal some interesting trends. Concentrations of carbon dioxide in the surface waters of the Logan Estuary are much higher than in the atmosphere (approximately 1000 to 2800 parts per million in the water, compared to about 385 parts per million in the atmosphere). They are generally greater in the upper reaches, where the salinity is lower, than at the mouth of the estuary. Measurements taken in February 2011 after the flood the previous month showed that concentrations increased by up to threefold, leading to the release of relatively large quantities of carbon dioxide from the estuary to the atmosphere.

Stable isotope analyses of phytoplankton, ciliates, copepods and fish are being used to get a handle on carbon dynamics and fluxes within the ecosystem, and their relationship with estuarine productivity. Project leader Dr Andy Steven, from CSIRO, said that for all four of these taxa, estimates of annual carbon flux were significantly higher in the Albert Estuary than in the Logan Estuary.

‘The narrower range of carbon isotope ratios observed in the Logan Estuary compared to the Albert reflects the greater influence of anthropogenically derived carbon in the more heavily urbanised Logan River,’ Andy said.

‘While it’s hardly news that human activities are having an impact on these estuaries, what’s novel about this work is our ability to express that impact in terms of the ecosystem’s carbon dynamics. This ability is going to be more and more important for environmental managers as we move towards a global carbon economy.’

In other news, CSIRO’s recently commenced Marine and Coastal Carbon Biogeochemistry Flagship Collaboration Cluster (known as the Carbon Cluster for short) aims to collate marine and coastal carbon datasets nationwide, and make them generally available through the website of TERN’s Australian Coastal Ecosystem Facility (ACEF). It also intends to assess the potential of coastal ecosystems to sequester carbon, a relatively new concept that is becoming known as ‘blue carbon’. It has been estimated, for example, that coastal seagrass meadows can store more than twice the amount of carbon per square kilometre as a typical terrestrial forest.

It’s unsurprising then that there is considerable interest in the outputs of a group recently funded through the Australian Centre for Ecological Synthesis and Analysis (ACEAS) that is looking at better ways of monitoring and assessing seagrass extent and health in our coastal waters. Keep an eye on the ACEAS portal for their results!