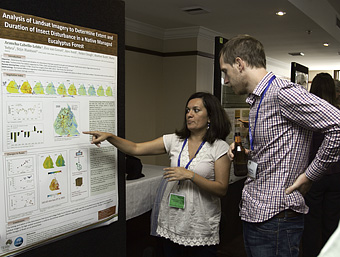 TERN’s success in building networks, collaboration and sharing data could allow TERN to become a world leader in an initiative being established by the  International Union for Conservation of Nature (IUCN).

Professor David Keith, who is affiliated with the University of New South Wales, NSW Office of Environment and Heritage and TERN Multi-Scale Plot Network, told delegates today at the 2013 TERN symposium that TERN has the expertise to develop consistent national criteria to meet the IUCN’s standards for assessing the health of ecosystems. The IUCN is known for publishing the ‘red list’ of threatened species and is embarking on a new initiative to identify global ecosystems under threat. Assessments will result in an ecosystem red list, similar to the IUCN’s red list of threatened species.

‘TERN could synthesise not only Australian ecosystems, but show other countries around the world how to do it. The US is possibly the only other country equipped to do this,’ David says.

‘The red list of threatened species is an international standard, and has been influential at a lot of levels. And it’s been a very effective communication tool.’

In Australia, we have used it to meet our international obligations, in environmental legislation, and in audits such as state-of-the-environment reporting.

‘Once you have nationally agreed criteria an assessment for each of the five IUCN criteria, a level of risk, and the key causes, this points the way to a management approach for that ecosystem. It also helps you compare with dissimilar ecosystems. Where would we get those kinds of data? TERN is absolutely built for something like this.’

David is part of an ACEAS-supported working group that is examining how the IUCN criteria can be applied in the Oceania region.

He presented the project’s work in the symposium’s biodiversity session, which was attended by leading ecologists, environmental scientists and ecosystem managers from universities, state and federal government, consultancies and conservation agencies.

Professor Michael Lawes from Charles Darwin University and Professor Chris Dickman from the University of Sydney outlined their teams’ investigations of small mammal decline. Michael said that hunting by foxes in southern Australia and cats in northern Australia had caused dramatic declines of marsupials and rodents.

The success of the introduced predators was amplified by simplifying vegetation structures, for example by introducing grazing, which had improved the efficiency of predation.

Dingo control, too, had affected the rate of predation by cats and foxes.

‘The reason the declines have been so sudden in the north, starting around 2001, is because the 1080 campaigns of the 1980s, which controlled dingo populations, released cats, and cat numbers have grown steadily. This was followed by canine distemper in the north, so dingoes got a double whammy, and cats have increased again. Cats are secretive by nature, and so we didn’t notice their increase initially,’ he says.

‘We think we’re looking at a tipping-point story—and the boat has sailed. The message for policymakers is that if we don’t control feral predators, we’ll see more declines.’

Professor Corey Bradshaw, from the University of Adelaide, reported on improved methods of measuring extinctions.

The ACEAS-working group led by Corey realised that if they looked at species abundance distribution instead of the spatial distribution of species, which was uneven, they got a more robust estimates—and a much cheaper survey tool.

CSIRO Chief Research Scientist Dr Alan Andersen outlined the role of the transects that make up the Australian Transect Network in understanding species responses to environmental stress and disturbance, including that caused by climate change.

Studying how species and ecosystems change across climate and environmental gradients allows us to predict about how species might adapt—or fail to adapt—to changing climatic patterns. For example, in South Australia researchers had observed that some orchids flower 20 days earlier than they did 20 years ago, and that hop bush leaves had become narrower over time, clear signs of adaptation to cope with increased heat stress. This cutting edge science is being used to develop evidence-based policy by the South Australian government to improve conservation planning and make the state more resilient to biodiversity loss.

Forestry Tasmania’s Dr Tim Wardlaw, also highlighted the impact TERN research is having on government policy, reporting on his research into how quickly species return to eucalypt forests after harvesting.

He conducted his research along a gradient of increasingly disturbed eucalypt forest at the Warra Supersite in Tasmania.

He found that if 20% of mature eucalypt forest was retained, and if harvested areas were within 400 metres of pristine areas, species would rapidly return to the harvested areas, quickly reaching similar species abundance and richness to pristine forest. As a result, Forestry Tasmania has changed its harvesting policy.

All presentations made at the TERN symposium will be available via the TERN web site after the symposium.