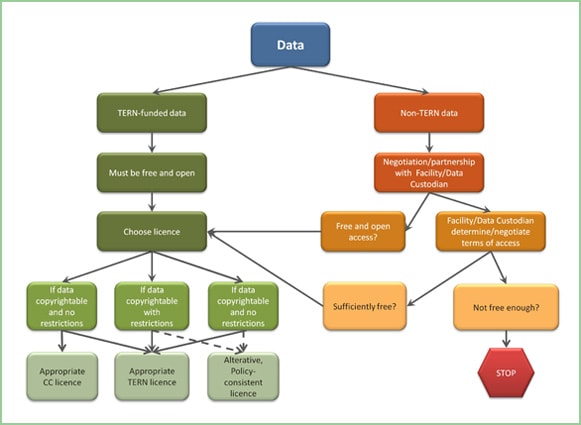 Worldwide, there are moves to reform policy and practice to give people open access to scientific information – changes that will have far-reaching effects on how data are used, and something that TERN has embraced wholeheartedly through its Data Licensing Policy.

TERN’s Eco-informatics facility, through its Data Custodian Reference Group, had substantial input into the development of the policy and has already used it to successfully publish several government datasets in the Australian Ecological Knowledge and Observation System (ÆKOS).

TERN’s Data Licensing Policy brings together the licensing conditions identified by TERN’s facility partners in a set of principles. It gives terrestrial ecosystem researchers access to licence arrangements that make it easy for researchers involved with TERN to quickly read about different types of licences for making their scientific data available freely available. The Director of TERN, Professor Tim Clancy, said the policy sets out ten principles for licensing research data about terrestrial ecosystems.

‘It takes into account the network nature of the TERN facilities and their host organisations, the differences in the structure and purpose of the facilities that make up TERN, the differing and complex nature of terrestrial ecosystem research datasets and the importance for data custodians to be duly acknowledged,’ Tim said.

The policy guides users to freely share, modify and use datasets while maintaining this same freedom for others. However, there are circumstances such as pre-existing obligations and ethical considerations that prevent totally open access, so, to keep the policy flexible and responsive to the needs of custodians and users, a suite of licences has been developed for licensing different types of data. Most importantly, and in contrast to most open-access licence regimes to date, the licences are not just applied to data that are subject to copyright protection: datasets that comprise data not covered by copyright, such as ‘facts’ or ‘observations’, are still covered under TERN’s licence policy. A simple ‘how to’ guide for applying these licences is provided in the policy.

Eco-informatics Director Mr Craig Walker said the facility had successfully applied the TERN policy to arrange licences to cope with the complexity of government and of TERN’s Multi-Scale Plot Network data. The University of Adelaide, the organisation that operates Eco-informatics, has negotiated the use of five Creative Commons Attribution 3.0 Australia licences with the governments of Western Australia, South Australia, Queensland, and the Northern Territory, and with CSIRO, and a Creative Commons ShareAlike 3.0 Australia licence with the Australian Bureau of Agriculture and Resource Economics and Sciences. Craig said Eco-informatics was finalising a TERN Attribution Licence (called TERN-BY) for another government agency concerned about datasets not covered by copyright. The full richness of these data with clear licensing information will be published via the ÆKOS data portal.

‘TERN’s licensing policy has been relatively straightforward to implement from our perspective,’ Craig said.

‘Negotiations with data custodians to share rich ecological data have run very smoothly when licensing options can be articulated in detail within a well-defined policy framework. It is important that data custodians and TERN facilities are fully informed of their rights and responsibilities when granting open access to data so that we can sustain productive data partnerships.’

For more information, contact the TERN Data Licensing Coordinator, Ms Alison Bradshaw, by email or on (08) 8313 1254.