The treasures of the south-west sandplains now revealed

Since TERN eNewsletter last reported on the fieldwork along the South West Australian Transitional Transect (SWATT) a lot has happened. Two long hot summers of fieldwork have passed, thousands of plant samples have been collected, sorted and identified, and a plethora of ecological data created.

We’re now pleased to report that all the data from our extensive field work along the SWATT are now openly accessible via TERN Eco-informatics’ AEKOS data portal.

Click here to access the SWATT data via TERN’s AEKOS Data Portal
The data will have a number of applications both nationally and internationally, and will make valuable contributions to researchers exploring questions about how the larger scale factors, such as global climate, affect the traits of local plant communities.

The field studies along the SWATT identified a total of 784 plant species, of which 24 have conservation significance. They also demonstrated that the vegetation communities and soils of these sandplains are heterogeneous, a very important finding says SWATT Research Scientist, Dr Rachel Meissner of the Western Australian Department of Parks and Wildlife.

‘We found a gradual turnover of species and a decrease in species diversity with increasing aridity in these sandplain communities along the SWATT,’ Rachel says. ‘Within a single sandplain, the vegetation communities are highly variable and may in fact be a response to the high variability of the sandplain soils.’

‘Changes in soil and climate attributes along the transect partly explain these findings. The extensive data set we have compiled will help us to further explore ideas regarding the unexplained variation, and thereby improve our understanding of these ecosystems.’

‘Most of our understanding of sandplain vegetation comes from areas closer to Perth so the baseline information will enable us to describe and better understand these sandplain communities,’ says Rachel.

Stephen van Leeuwen of the Western Australian Department of Parks and Wildlife, says that land managers and policy makers will be able to use the knowledge this project has generated to make informed decisions on how to best manage these ecosystems for economic and environmental sustainability, both here in Australia and in similar ecosystems around the world.

‘The uniqueness and heterogeneity, in terms of the vegetation and the soils, the SWATT surveys found have implications for how we conserve and manage these sandplain communities,’ says Stephen. ‘The data can be used to compare what we’re finding in Western Australia to what other researchers have found elsewhere.’

The SWATT’s research infrastructure extends for over 1,200km from Walpole on the south coast of Western Australia to just beyond the former pastoral lease of Lorna Glen and into the Little Sandy Desert. The transect crosses eight bioregions and various land uses from tall southern forests, through agricultural land with fragmented vegetation and continues northwards across rangelands where pastoralism and mining are dominant land uses.

The surveying and monitoring sites have been established using a methodology based on the AusPlots protocol, and includes a number of extra measures, including 20m2 sub-plots within each 1ha plot, to align with WA government vegetation and soil monitoring programs.

The SWATT is part of TERN’s Australian Transect Network and is one of the major environmental monitoring transects within the Australian continent. Director of the Australian Transect Network, Ian Fox, says that ‘Transects capture information across the biophysical gradients that drive species selection, influence community composition and determine assemblage distributional patterns across the landscape.  Perhaps the most significant of these is the variation in climatic regimes which is best exemplified in the SWATT by the key productivity driver, rainfall. This research helps us understand how species and ecosystems adapt to change.’

TERN’s Eco- informatics facility is working with Australian researchers to publish their plot data. It is also helping to increase the rewards to the original researchers by facilitating data reuse, including those from SWATT, alongside other vegetation-plot databases covering biomes in Europe, Africa, Asia and Australia. 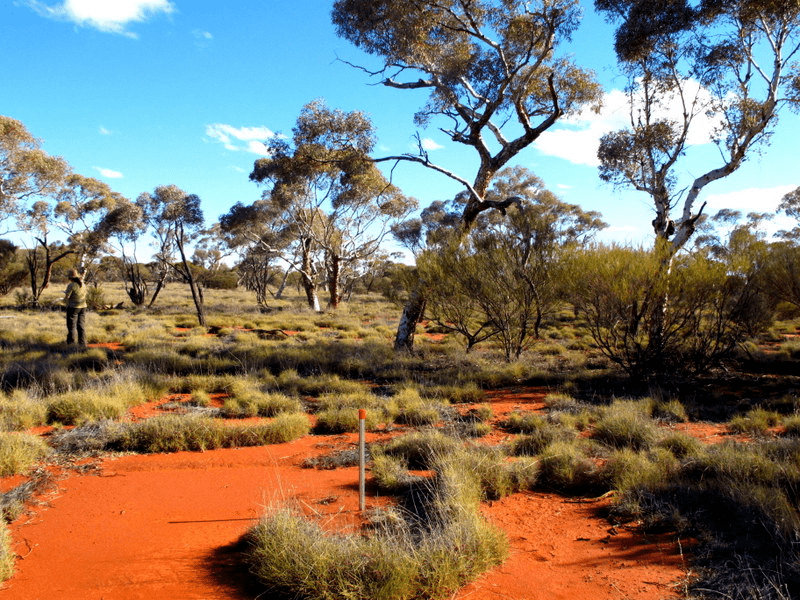 Field sampling at sites like the one above along the SWATT identified a total of 784 plant species, of which 24 have conservation significance, and demonstrated that the vegetation communities and soils of these sandplains are highly heterogeneous (photo courtesy of Rachel Meissner)