Ecological studies offer an effective means for building a knowledge base that can be used to inform biodiversity management and conservation. This is a motivation behind the work of the Long-Term Ecological Research Network (LTERN), a sub-facility of TERN’s Multi-Scale Plot Network. LTERN brings together some of Australia’s leading ecologists from a range of institutions, and integrates established research plot networks across Australia to tackle questions about the impacts of disturbance on Australian ecosystems.

One of these is the Mallee Plot Network led by David Keith, Professor of Botany at the University of New South Wales, and Mark Tozer, a research scientist with the NSW Office of Environment and Heritage. The network includes plots located in the Tarawi Nature Reserve and Scotia Wildlife Sanctuary in the south-west of NSW. They are located on former pastoral leases, which were converted to protected areas prior to or during the early 1990s.

In 1997 David, Mark and their team commenced their studies of ecosystem dynamics in these plots, in order to better inform the development of management strategies for biodiversity conservation. With a range of fire histories represented across the plots, including patches that had remained unburned for nearly a century, the plots presented researchers with a unique opportunity to examine the role of fire as a process that shapes changes within the ecosystem. The presence in the region of a range of native and introduced herbivores that include kangaroos, goats and rabbits also gave the team opportunities to investigate the role of herbivores in the system.

Within this matrix of natural variability the research team designed and implemented an experimental approach to investigate the effects of different processes that drive changes in the ecosystem. In coordination with local land managers, a program of prescribed burning was put in place along with grazing exclosures that could be used to keep out varying combinations of herbivore species for a chosen length of time.

The design of this research means that David and his team can evaluate the relative influence of the different ecosystem drivers under varying environmental conditions. An early finding of the work was that very long fire intervals (up to 100 years) do not reduce the capacity of the ecosystem to recover from bushfires. The results also suggest that, of the three herbivores, goats have the most substantial impact on the broadest range of plant species, while kangaroos can have appreciable effects on grasses. Importantly, the impact of herbivores is greatly magnified in the post-fire environment. This underscores the importance of integrating strategies for the management of bushfires, pest animals, and kangaroos.

The formation of these long-term experimental plots also helps to establish ecological baselines, and allows the research team to observe and document the impacts of unexpected events. For example, Australia’s arid and semi-arid environments, including the mallee, have highly variable rainfall, with extended dry or drought periods interspersed by large episodic rainfall. The Mallee Plot Network team observed one such event over 2010–2011 when the previous decade of drought was broken by two years of heavy rain – each year setting a new record for the highest annual rainfall in the region.

Anecdotal observations by the team during the wet years suggest a reduced impact of herbivores on vegetation, along with higher regeneration of woody species compared to the previous dry years. The data are still being collected to resolve the precise nature of these responses. While these immediate responses to increased rainfall are important, the team’s work also points to significant impacts of this event over a longer term. Rare phenomena can have significant and lasting effects on ecosystems, and it is possible that these rare wet years are significant for ‘topping up’ the system and ensuring it has the capacity to persist through future drought.

David and Mark took the opportunity to discuss their studies with colleagues at a workshop hosted by TERN’s Multi-Scale Plot Network in late August. This workshop represents one of the many benefits David sees arising from an involvement with LTERN. ‘We can interact with other people working on similar kinds of problems with similar approaches in a range of different ecosystems, and work through our challenges and difficulties together. By working together we can also develop the collective knowledge of Australian ecosystems,’ he says.

In addition to these opportunities, David sees advantages in TERN’s comprehensive approach to managing data throughout its lifecycle. Through LTERN the Mallee Plot Network has the basic resourcing needed to establish and maintain infrastructure for data collection, and TERN’s data management infrastructure ensures that any data collected is then stored and accessible. ‘This provides more security for the data in terms of its longevity, and protects the investment in data for the future. It also gives us an opportunity to share the data with others and promote collaboration,’ David says. 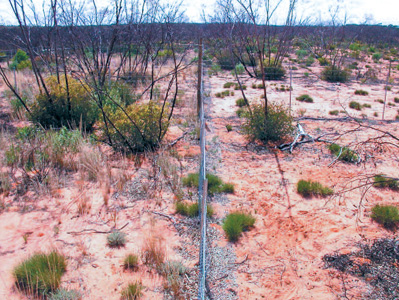 An example of the experimental exclosure plots that restrict the access of rabbits, kangaroos and goats. The plot in the right foreground is accessible to all three species and shows hardly any tussock grasses. The plot in the left foreground is accessible only to kangaroos and shows open cover of tussock grasses. This photo was taken two years after the plots were burned, and one year after the exclosures were opened to allow herbivore access. 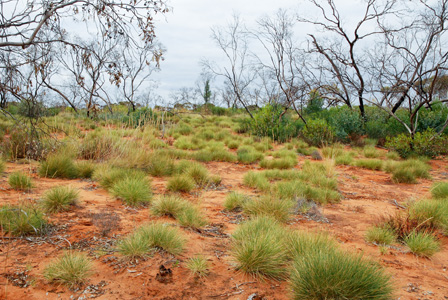