The effects of the early 2013 floods in south-east Queensland, particularly in the Logan and Albert catchments, have been widely documented and many of us have seen the images of these floods in the news.

And while they paint a vivid picture of what happened, they don’t capture the profound ecological, hydrological, geomorphological and biogeochemical effects that floods have on a landscape. Nor do they particularly help people to target flood-management practices or prepare us better to deal with floods. However, thanks to a new project of TERN, CSIRO and ANDS, soon we’ll be seeing a new suite of interactive educational tools that aim to visualise flood events in detail.

The project recently brought together a number of leading ecologists, hydrologists, modellers, managers and science communicators from a range of public and private organisations including three Queensland government departments (EHP, DSITIA and DEWS), CSIRO, ANDS, Seqwater and Healthy Waterways to brainstorm ways of visualising and learning from floods. They attended a workshop, hosted by TERN and CSIRO, in Brisbane in early September to discuss how flood-related data can be used to create visualisation tools that aid in solving specific scientific and management questions.

A number of tools that may be suitable for flood visualisation were brainstormed, ranging from the ANDS-funded SEQuITOR tool, right through to utilising gaming technology such as that used in the popular game SimCity. One option is to use Google Maps-based tools, which have seen recent success in other fields of science communication, to present geographical and visual components. Combining this with flood animations and conceptual diagrams, we may be able to produce a problem-solving and educational tool that presents important data that is user friendly and interactive.

Whatever tool is chosen, those involved hope that it will helps the science community as well as the general public. Healthy Waterways’ Chief Scientist, Dr James Udy, thinks that the ideal option will be ‘creating something with an entertaining and interactive interface that’s appealing and easy for all users, with the capacity to delve into the detail’.

What do you think is the best way to visualise floods? Is there a method that you think is better than others? Get in contact with TERNand let us know.

You can also find more information on this project here. 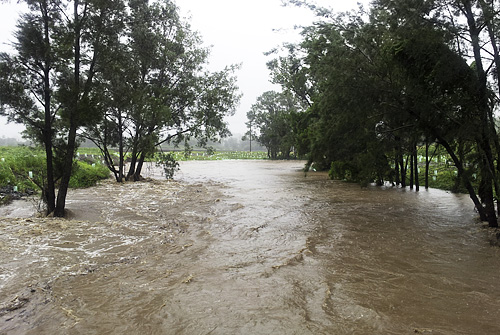