Wave of extinctions in the north shows history repeating itself 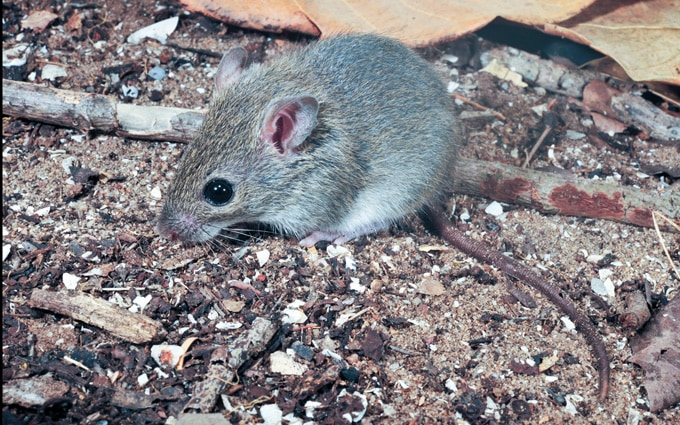 The pale field rat (Rattus tunneyi) is small, cute, innocuous – and under threat. This species has declined dramatically in northern Australia due to a predicted combination of cat predation and increasing extent of fires. (Photo by Eric Vanderduys, CSIRO)

It is likely that a new wave of mammal extinctions is occurring in northern Australia, in a repeat of extinctions that occurred in the southern half of the continent, new analysis shows.

The causes of the extinctions continue to be debated, but, researchers say, there is ‘strong evidence’ that the main ones are predation by feral cats, changes in the pattern, frequency and intensity of fires, and long-term cattle grazing.

Led by Dr Alex Kutt, researchers from a number of ecological and conservation disciplines came together to form the ‘Vast lands and variable data’ working group, supported by the Australian Centre for Ecological Analysis and Synthesis. The group collated and analysed data on mammal declines, and examined them through a new lens to see if different patterns of extinction would emerge.

They did. And it’s not a pretty picture.

‘Australia already has the shameful record of having the highest rate of mammal extinctions in the world: we have lost 17 species on the mainland of southern Australia and 50% of our mammals have declined in range,’ Alex says.

‘With this project, we’ve complemented knowledge about extinctions in southern Australia by building a picture of the extinction of mammals in northern Australia,’ Alex says. We looked at more than 600,000 unique data records, and also trends in monthly temperature and rainfall from 1950 to 2010. We looked at the association between the decline of populations and the decline of the range of species. We compared what has happened in northern Australia since 1950 to what happened in southern Australia before 1950, by testing if the processes that happened in the south – the spread of European ways of managing land and of farming – were having the same influence in the north.’

Biologist Dr Diana Fisher was the lead author for this section of the project. She’s been collecting and interpreting data on the characteristics of declining marsupials for years.

‘We wanted to know if the same types of species are declining now in northern Australia as went extinct in southern Australia in the 19th and 20th centuries. In the south, it’s well known that feral foxes target medium-sized prey in open habitats there,’ Diana says.

‘For the north, we can narrow down the more likely causes. Judging from the strong pattern we found, that small marsupials in open savannas are the ones doing badly, the implication for the north is probably predation by feral cats. It’s pretty hard to think of another reason for the disproportionate vulnerability of small creatures in exposed habitats other than a widespread introduced predator that targets those species – the cat is the only one we have in the tropics. Recent land use, such as grazing and very frequent burning, has opened up savanna habitats. Many people assume that cane toads are the major problem in the tropics, and it’s true that in Kakadu, for example, cane toads have taken a toll on northern quolls, but they don’t fit with the timing and pattern of decline of other marsupials. Northern quolls declined a lot even before cane toads arrived.

‘Even if cats are shown to be a major problem, you can’t get rid of them. What we can do is conduct enclosure experiments to test how important cats really are, and then if our suspicions are confirmed, try to improve the habitat by increasing shelter so small marsupials have a chance to avoid cats.’

The project team considered the relative influence of recent climate change, versus more tangible land-management choices such as habitat clearing, fire management and dingo persecution. The natural boom–bust cycle of weather-mediated changes in mammal populations is well documented and understood. In northern Australia, where the natural pattern is for highly seasonal annual variation in rainfall, the decline in mammals had been thought to be independent of a broader climate effect. Alex said that recent detailed analysis of the velocity of climate change in the north indicated that there had been distinct differences in climate change from the west coast to the east and that these might have some influence on local mammals.

‘By combining the accumulated datasets on mammal distribution and 60 years of historical weather data, the group has been able to evaluate how recent changes in weather patterns in northern Australia may be casting an additional, complex shadow over the story,’ says Alex. ‘If we can articulate the relative effect of changes in recent historical environmental suitability, we can better define the effect of factors such as increased predation or altered fire regimes, compared to more global environmental changes. This is important as there is a tendency for people to wring their hands over climate change, doomsday scenarios, and the need for adaptation strategies. Teasing out these interacting effects allows managers to prioritise what conservation action can be taken now to arrest mammal decline, and differentiate that from planning that needs a bit more horizon scanning.’

The project team has also developed some useful tools. One is a compilation of life-history information – that is, what is the common size, distribution habitat or breeding traits – that can be used to interrogate the similarities and differences in key species and groups that are under threat. This was used in the analysis described above. The next step is to investigate the pattern in rodents. In addition the group also used visual deliberation software to depict complex hypotheses about decline in mammal species. This process helps experts generate a common understanding about the potential causes of mammal declines, by reviewing extant evidence and making decisions about the sufficiency of the evidence, thereby helping to clarify which approaches to research and management are the most strategic. Participants of the workshops employed in management, research and government were interested in using these tools in future decision making processes.

The final report on the project is available from the project web page. ‘Vast lands’ is an example of the new ideas that can be generated from existing data by putting the data together in ways that have only become possible with the availability of contemporary computing and data processing technology, and because of the will of researchers to work collaboratively. The first paper as an outcome of the project has been submitted to Global Ecology and Biogeography. Two more papers are under way: one is a complementary analysis of patterns of northern Australian rodent declines led by Professor Michael Lawes, at Charles Darwin University, and the second is on the relative effect of recent historical weather patterns on mammal distribution.

The project was able to attract additional funding from the Australian National Data Service (ANDS) to further develop current and predicted species distribution maps for different climate change scenarios, which complement those being developed for Australian birds.

Fire, grazing and changed weather patterns reduce ground cover and the
habitat of small terrestrial mammals. These factors probably combine to
increase the success of predation by feral cats on small mammals in northern Australia. (Photo by Eric Vanderduys, CSIRO) 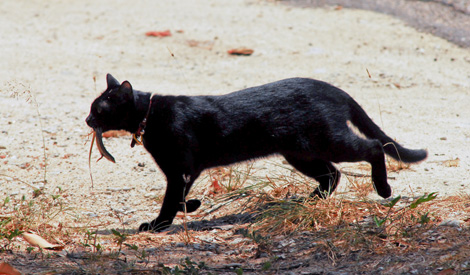 The feral cat (Felis catus) is a significant predator of native fauna, and is linked with the extinction of many small mammals across Australia (Photo by Eric Vanderduys, CSIRO)