Access to others’ data the way to answer the big questions 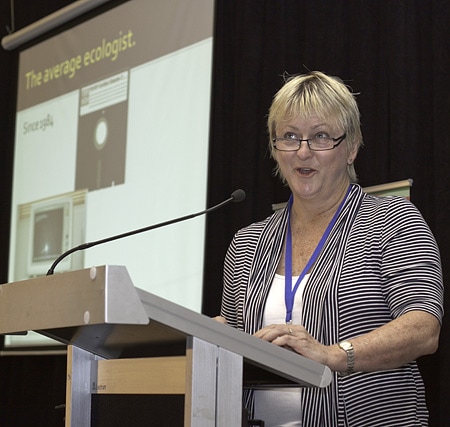 TERN fills a gap in the ‘wide open space’ in Australian landscape ecology for Professor Kris French, the President of the Ecological Society of Australia.

Addressing the Wednesday plenary session of the 2013 TERN symposium, she described ways in which she uses TERN – and the ways she could have used it had it existed years ago, when she was storing data on floppy discs and doing analysis on paper.

‘For Australia-wide or large-region research, TERN is a one-stop shop,’ Kris says. ‘Ecologists investigate patterns in nature, and TERN’s infrastructure will help us to investigate patterns and processes across different scales. Having standardised protocols [such as those TERN is developing] are another really big advantage in this.’

The various facilities each played a role that ecologists could use: to answer a research question, an ecologist might analyse time-series maps of the continent (from AusCover), tap into regional plot data (AusPlots Forests, AusPlots Rangelands, the Australian Supersite Network, LTERN) and national and global flux data (OzFlux), rely on the consistency of standardised protocols (AusPlots, AusCover and others), or upload their own datasets and use others’ (ÆKOS, and a range of TERN data infrastructure). Of course, all data available through TERN facilities can be accessed from one central point – the TERN Data Discovery Portal.

However, she said, many ecologists were wary about sharing data, partly because the concept was new and protocols were still being developed.

Among the concerns are managing the quality and quantity of invitations to collaborate, and the need for authors to describe their data very well.

‘Poor-quality papers written on your data will reflect back on you, so we have to find ways of making sure data are not misinterpreted,’ Kris says.

An important first step is being clear about the context that data was collected in – and that means clear metadata like that used throughout TERN facilities, which enables that context to be collected.

‘Responsibility also falls back onto the shoulders of ecologists – we have to be diligent when reviewing papers, especially in cases where the authors are reusing someone else’s data,’ Kris says.

She sees the synthesis model of collaboration of the Australian Centre for Ecological Analysis and Synthesis (ACEAS) and its international equivalents as the future in interpreting data.

‘We need new data, new research and new thinking. The synthesis facilities can be a think tank of understanding pattern and process in ecology.’

In his plenary address, Dr David Schimel, at NASA’s Jet Propulsion Lab at the California Institute of Technology, also flagged the importance of synthesis centres in understanding ecological functions and changes at large scales.

‘The way I see it is that TERN is not a network, which I see as a trigger for deciding on management responses to the knowledge that science gives us. They’re for implementing well-understood protocols,’ says David, who until recently was the Chief Science Officer of the National Ecological Observatory Network (NEON).

‘With institutions like TERN and NEON, we’re building observatories. They’re designed for discovery of the things we don’t understand, to enable new science and discoveries.’

He said the scales that ecologists are working at today often cannot be manipulated experimentally, and advanced technology had become critical to undertaking large-scale research.

‘I think this requires even more intellectual discipline, to use huge observational datasets, than using small-scale data,’ David says.

‘Data exceeds the grasp of individuals. Data is infrastructure. TERN’s role as an observatory covers big and little science, which gives us access to the big questions. We need to train good ecologists with intuition and insight. The synthesis centres are critical in teasing out these insights.’

All presentations made at the TERN symposium will be available via the TERN web site after the symposium.