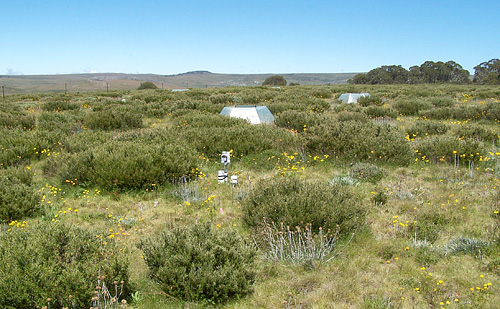 Australia is one of the numerous nations, which include all Arctic countries, involved in a long-haul project called the International Tundra Experiment (ITEX) to investigate how global warming is affecting tundra plants and animals.

What has a hot, dry country got to offer? Alpine ecosystems at the other end of the world and decades of data, according to Professor Ary Hoffmann, who’s involved in the ITEX research.

‘Australia is an outlier. So although the Australian ITEX experiment confirmed the northern hemisphere results, it also allowed us to look at what’s unusual about Australia,’ says Ary, an ARC Australian Laureate Fellow at the Departments of Genetics and Zoology at the University of Melbourne.

‘What we’re looking at is what’s generally the pattern in response to an increase in temperature.’

He was part of a five-year experiment to measure changes in plant budding, flowering and seeding times (phenology) in open grassy heathland in the Bogong High Plains of Victoria. The researchers used small chambers to artificially warm plots by about 1°C, following the ITEX protocol, to investigate how this delicate ecosystem might respond to global warming.

The plots are part of TERN’s Long-Term Ecological Research Network (LTERN), where scientists have been monitoring vegetation since the 1940s. Temperatures here have risen about 0.2°C every decade since the 1970s; at the same time, rainfall, snow depth and snow cover have decreased. Having so many decades of data was invaluable for the ITEX project, Ary said, because they put in context the results of the five-year experiment, and helped scientists interpret their data.

Ary’s group found that there was more variation in phenology from year to year than between plants in the warmed plots and those in control plots. It also discovered that some species responded in the first year of warming, and that it took others several years to respond.

‘This means we have to be very careful about which plants we select when we set up long-term monitoring projects, and which species we use as indicators of irrefutable change,’ Ary says.

In the warmed plots, the researchers also observed a change to more woody vegetation and fewer species.

‘After this experiment, we now have some really solid evidence behind us to say confidently how alpine plant communities are likely to change in response to warming and fire,’ Ary says.

‘The results also raise questions about changing interactions with animals. For instance, are plants losing synchronicity with the availability of insect pollinators, and do they also risk loss of seed from heavier insect predation? These effects as well as the more direct effects of global warming, including frost incidence, drought and heat stress, could contribute to a long-term decline in vegetation. In turn, this could result in erosion, decrease the amount of carbon stored in the vegetation and soil, and decrease the amount of water coming from mountain catchments and used by irrigators to produce food.

‘One of the new datasets shows there is a very strong selection on flowering time and seed set. If plants flower too early they might get hit by a late frost, and if they flower too late, predation by hungry insects can be very heavy, particularly when warmer temperatures can cause explosions in insect numbers. Both of these situations make it much harder for a species to survive. These selective forces may therefore cause a decline in the numbers of many species.’

Under the ITEX project, researchers are carrying out experiments in two dozen sites around the world to test how Arctic and alpine vegetation might change by studying the response of several species to an increase in summer temperatures. Evolutionary history, ecology and genetics are all brought to bear in long-term and short-term experiments. If the predictions of the ITEX group come to pass, global warming won’t just affect alpine and tundra plants, of course, but also the animals that depend on them, and human livelihoods. And it may accelerate warming, when massive stores of carbon and methane are released from thawing permafrost.

‘The alpine ecosystems in Australia are a unique barometer, as there’s nowhere else for those animals and plants to go,’ Ary says.