Australian researchers are using TERN infrastructure to take part in a landmark global experiment that investigates the impact of drought on our ecosystems, and helps to predict and mitigate their continental- and regional-scale impacts.

Climate change is predicted to increase both drought frequency and intensity and the latest science from the IPCC indicates that such an increase will cause abrupt and irreversible change in the composition, structure, and function of terrestrial ecosystems.  However, just how ecosystems will respond to increased drought isn’t clearly understood.  Nor are the factors that make some ecosystems more sensitive than others.

To address this knowledge gap an international group of scientists affiliated with the US National Science Foundation-funded Drought-Net Research Coordination Network (Drought-Net), is working at research sites all over the globe to understand terrestrial ecosystem sensitivity to drought and the mechanisms underlying response patterns.

Experimental plots with custom-built shelters designed to reduce rainfall and simulate predicted future drought conditions have been established at TERN sites as part of this landmark global experiment.

Shelters’ for the Drought-Net experiment have been established at a number of TERN’s environmental monitoring sites, including Great Western Woodlands in WA (above)

Associate Professor Sally Power of Western Sydney University is on the international steering group for Drought-Net and says: “access to TERN’s research infrastructure and the integrative, networked approach that it facilitates is enabling us to further our predictive understanding of Australian and global terrestrial ecosystem sensitivity to drought.”

‘Drought shelters’ for the Drought-Net experiment have been established by TERN’s partners at a number of TERN’s environmental monitoring sites, including Great Western Woodlands in WA, Cumberland Plain in NSW, and the Victorian Dry Eucalypt SuperSite at Wombat Forest.

Ecologists on opposite sides of the continent working at TERN’s Great Western Woodlands and Cumberland Plain sites are restricting up to 65% of rainfall at 18 Drought-Net plots and monitoring changes in soil moisture and biomass.

In addition, the Desert Ecology Research Group (DERG) at The University of Sydney has also established drought shelters at the Desert Ecology Plot Network, which is one of TERN’s long-term research sites in Queensland’s Simpson Desert.

Researchers at these sites are imposing an 85% reduction in rainfall and have completed surveys of plant composition and productivity and collected soil samples in a bid to better understand the environmental drivers of change in arid landscapes.

This research could be used by rangeland and agriculture managers to develop management strategies that incorporate the impacts an increasingly warm climate with extreme rainfall patterns will have on arid landscapes.

While TERN has helped facilitate Australia’s participation in the global Drought-Net project possible, Sally notes that this is only the beginning.

“By maintaining and expanding TERN’s nation-wide research infrastructure, Australia’s capacity to collaborate on important projects like this will be significantly enhanced—as will our contribution to global climate science.” 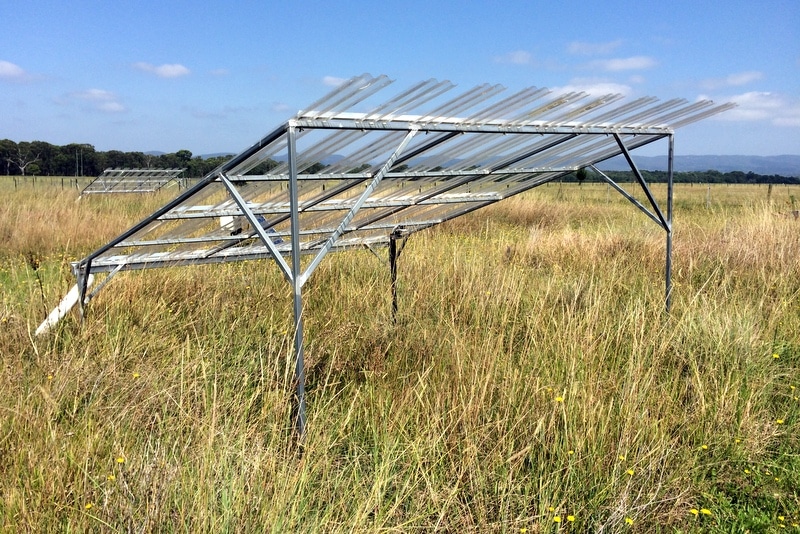