Indigenous know-how on burning savannas to be exported

Northern Australian know-how on controlling burning in savannas to minimise the release of carbon to the atmosphere is about to be exported.

Indigenous land custodians are working with other experts in northern Australia and our neighbours in Timor and Papua New Guinea to collect shared knowledge from traditional Indigenous and contemporary practices for managing land so that it may be shared more widely. It is happening at a series of workshops under the banner of the project, ‘Ecosystem services and livelihood opportunities’, which is being supported by TERN’s Australian Centre for Ecological Analysis and Synthesis (ACEAS) and the United Nations University (UNU).

The principal investigator in the project, Dr Jeremy Russell-Smith, said that exporting Australia’s savanna-burning program was one of the great results that came out of a recent workshop.

‘It’s about traditional custodians and knowledge-holders, with the support of others, working out how to keep their people on the land they care for, and earn an income from it in the new carbon economy,’ Jeremy says. ‘The UNU, AusAID and the Australian Government’s Department of Climate Change and Energy Efficiency (DCCEE), are supporting this initiative. We will commence next year with a detailed assessment of the transferability of the program to other fire-prone savanna regions.’ Contributions of the Australian experience will be coordinated through the North Australian Indigenous Land and Sea Management Alliance (NAILSMA) and other fire project partners.

Jeremy said the group was using the workshops to explore ways that Indigenous people might receive an income for providing environmental services in savannas, mostly through the application of combined customary and contemporary knowledge systems.

At its first workshop, the group addressed sustainable development challenges and opportunities for payment for providing environmental services (PES) for Indigenous peoples in savannas in northern Australia and adjacent regions in eastern Indonesia, Timor Leste, and Papua New Guinea (PNG). More than 30 people met in Darwin in April under the expert guidance of Professor Bob Costanza and Dr Scott Heckbert (both then of the Portland State University, USA) to begin formal PES scenario modelling assessments pertinent to three regional situations:

The project group recently held a modelling workshop in Papua New Guinea with funding from PNG Sustainable Development Program and the UNU. Another workshop is planned for Timor in early 2013 with funding support from by the Crawford Fund and Indonesia’s Forum Daerah Aliran Sungai (a non-government organisation concerned with water catchments). The group is preparing papers on its modelling approaches and outcomes in savanna landscapes, and the importance of addressing customary governance arrangements in PES projects.

The work is important for those who live in savannas. In the world of tropical environmental conservation, climate mitigation, and sustainable development, fire-prone savanna systems play a lowly second fiddle to tropical forests, which are richer in biological diversity and carbon.

Hence, attention is typically focused on supporting tropical forest conservation initiatives in developing countries. It includes PES projects, particularly through international instruments such as REDD+, a United Nations program based on Reducing Emissions from Deforestation and Forest Degradation, with the addition of conservation, sustainable management, and the enhancement of forest carbon stocks in developing countries.

Savannas, however, support about 10% of the human population, occupy one-sixth of the land surface and, while rates of land-use change are uncertain, are likely to suffer twice the rate of conversion from natural to agricultural systems as tropical forests do. In comparison with tropical forests, savannas store about 15% (vs 25%) of the total carbon contained in the world’s vegetation and soil organic matter, and account for a similar proportion (about 30%) of terrestrial net primary productivity. The lower storage capacity of savannas is largely due to the effects of frequent fires returning carbon to the atmosphere.

A second-stage workshop is likely to be put to ACEAS and UNU for funding later in 2013. For more information, email Jeremy Russell-Smith. 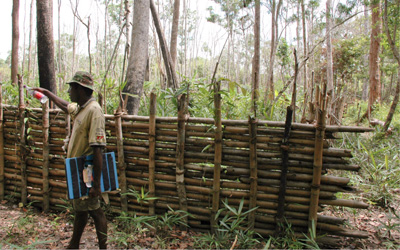