In an effort to highlight terrestrial ecosystem monitoring, research and management in the broader Oceania region, we bring you news—and a stunning collection of photos—on national-scale monitoring efforts in Papua New Guinea that are delivering both national and global sustainability and development outcomes.

Australia has TERN and similar national ecosystem observatories operate in North America, Europe, Africa and Asia.  But what about large-scale terrestrial ecosystem monitoring, research and management in the broader Oceania region?

To find out more, this month we head to Australia’s nearest neighbour, Papua New Guinea (PNG)—home to the world’s third largest tropical rainforest where an estimated 5-10% of the world’s plant and animal species are found.

Dr Ruth Turia of PNG’s Forest Authority says that although the nation’s forest cover is high (78% of land mass) and still intact (76% undisturbed) with low levels of deforestation (average 0.05% annually between 2000 and 2015), the nation’s forests are coming under increasing pressure from agriculture (both subsistence and commercial) and commercial logging.

“More than 80% of PNG’s population depend directly on forests for food, shelter, medicine and other cultural benefits, yet our scientific understanding of the forests and their services is quite limited.”

“To address this gap and contribute to achieving the country’s development goals and climate change policies, PNG’s first National Forest Inventory was created.”

From high above the canopy right down to the ground, PNG’s landmark National Forest Inventory (NFI) project is collecting detailed information on forest produce, carbon stocks, soil characteristics, biodiversity in both flora and fauna, and the socio-economic aspects of one of the world’s most important rainforests.

NFI uses a two-phase approach that combines both remote-sensing-based forest assessments and on-ground field inventory work.  So far 159 forest plots in 7 provinces (out of a total of 22 provinces in the country) have been assessed.

Such coordination between landscape-scale remote sensing analyses and plot-based surveys enables environmental change to be assessed at the full range of scales. For example, remote sensing allows scientists to know where and when change is occurring, and on-ground monitoring assesses what’s changing, the direction and magnitude of change, and why change is occurring.  Despite proven advantages, such an approach requires large (often national or continental) scale coordination and is therefore, surprisingly uncommon around the world and so far, has only been used by a handful of national-scale ecosystem monitoring projects, including TERN in Australia. 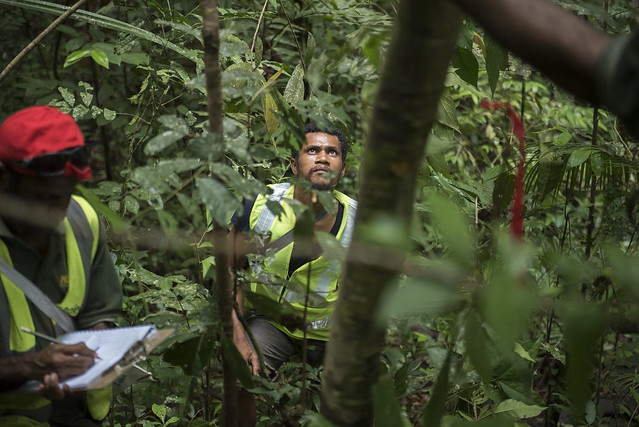 Field assessments have been conducted since 2017, and field data collected for analysis and reporting. Not only will the NFI make a significant scientific contribution to the understanding of PNG’s tropical rainforest and its biodiversity for sustainable management, it will also enable PNG to accurately estimate carbon stocks and greenhouse gas emissions from deforestation and forest degradation.

Dr Hitofumi Abe, a Chief Technical Advisor with UN FAO, says that the inventory has enabled PNG to progress the nation’s readiness for REDD+, which aims to reduce emissions from deforestation and forest degradation in developing countries. It has also helped formulate climate change policies and report GHG emissions under the UN Framework Convention on Climate Change (UNFCCC) inventory sector covering emissions from human uses including commercial and forestry activities (Land Use, Land Use Change and Forestry (LULUCF)).

“Data from NFI has contributed well to form the PNG government’s climate change policies and international climate change reports. NFI has also significantly progressed the nation’s readiness status for REDD+, which aim to conserve forest carbon stock through their sustainable management.” “For example, NFI data were used to establish the REDD+ Forest Reference Level as well as the nation’s first Biennial Update Report to the UNFCCC, and also National REDD+ Strategy. In addition, the project is helping to initiate ways of establishing a timber legality verification system.”

Final workshop of the National Inventory Project held this morning. Congrats govt of #PNG through PNG Forest Authority & @FAOinPNG on the successful implementation of this multipurpose programme, funded by the #EU that has spanned 5 years. #ActNow #ClimateAction #SDG13 pic.twitter.com/14AWcpSubf

To help share such successes with other Pacific islands countries, PNG is cooperating with the Solomon Islands and Vanuatu via workshops and study tours.

TERN would like to congratulate our PNG colleagues and their collaborators for such a successful large-scale ecosystem monitoring effort. We look forward to working closely over the coming years on ecosystem monitoring, research and data sharing projects throughout the Oceania region.