NATT the backbone of NT research 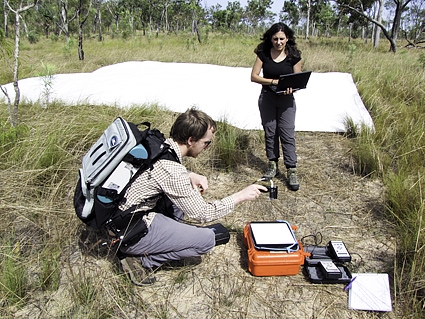 The Northern Territory (NT) is home to some of Australia’s most recognisable and distinctive landscapes and ecosystems, and is also Australia’s most sparsely populated state or territory with over 40% of the population living in remote or very remote locations.

With an economy that relies heavily on mining, agriculture and tourism, effective monitoring and management of the NT’s ecosystems are essential to support the livelihood of local communities. TERN is playing a key role in this space, providing infrastructure needed to support ecosystem science and management across the NT. Our comprehensive network of research infrastructure extends almost the length and breadth of the territory, enabling new avenues of research and providing practical benefits to the community on issues such as land-use change, carbon farming and fire management.

TERN’s network of infrastructure in the NT is drawn together around the ‘backbone’ of the North Australian Tropical Transect (NATT), a 1,000 km long transect that starts outside Darwin and stretches into the dry heart of the territory. It covers the tropical savanna ecosystems, and encompasses a variety of soil types and rainfall zones ranging from 1,600 mm/yr in the north to 500 mm/yr at its southern extent.

The NATT functions as a living laboratory, enabling researchers to better understand ecosystem processes from different angles, such as biodiversity, soils and carbon stocks. It’s also attracting international research attention, with a number of students and researchers from around the world visiting the Top End to work in the NATT each year.

Some researchers working in the NATT are studying the composition of ant communities along the rainfall gradient, to better understand how patterns of biodiversity may change with varying climate.

TERN’s OzFlux network has a series of field observatories along the NATT that draws together flux towers operated by TERN and its partners, thus ensuring all of this data is available for wider use through the OzFlux portal. Scientists use data from the towers to compare carbon, water and energy exchanges along the vast gradient covered by the NATT.

A team of researchers from Charles Darwin University, Monash University, the University of Melbourne and the NT Government has used this infrastructure in a recent ARC Linkage-funded project to investigate impacts of land-use change in the NT.

Dr Mila Bristow is one of the team working on the project, which uses the data streams available through the OzFlux network to investigate how changing land uses could affect water resources and greenhouse-gas exchanges in Australia’s tropical savannas.

With the cooperation of the owners of the Red Dirt Melons Farm near Katherine, Mila and the team established a flux tower on the property before it was cleared for farming. The flux tower has run continuously through the process of clearing, and after, and this has allowed the team to observe changes to the natural patterns of carbon and water flux, along with changes in other greenhouse gases like methane and nitrous oxide.

Mila presented her initial findings at the TERN Symposium in February. She described how the area shifted from a weak carbon sink before it was cleared to a net source of carbon afterwards. The next step is to continue monitoring as the farm begins operations to understand how these agricultural processes may affect carbon and water exchange.

With increasing interest in expanding agricultural production in northern Australia, Mila’s work is vital in helping ensure we understand the impacts of potential land use change.

‘If Australia is going to make decisions about changing land use then studies like ours, and tools like flux towers, and networks like TERN can help us understand some of the trade-offs we are making, and inform our decision-making processes,’ Mila says.

Cameras on the flux tower at the Red Dirt Melons farm allowed the team to observe all changes at the site. The video shows a time-lapse sequence of the clearing at the site.*

OzFlux’s footprint on the ground in the NT starts near Darwin, with Australia’s longest-running flux tower at Howard Springs, and extends south to the Alice Mulga Supersite just north of Alice Springs. This field site, along with the Litchfield Savanna Supersite, are members of the Australian Supersite Network and are another element of TERN’s research infrastructure in the NT.

There are two flux towers already in place at the Alice Mulga Supersite, where work on the ground is helping to build knowledge about the carbon, water and energy fluxes of arid and semi-arid zones. The first of these towers is situated in the mulga, a habitat that covers 20%–25% of Australia’s land area. The second tower is situated in Triodia (spinifex) grassland, a habitat that also covers 20%–25% of Australia’s land area. Thus, this work is vital in enabling understanding of ecosystem processes representative of a large portion of Australia’s natural environment. This information will contribute to better land management, and improved modelling of Australian weather, climate variability and the response of these zones to climate change.

The infrastructure in place at the Litchfield Savanna Supersite is helping scientists to better understand the dynamics of vegetation structure and fire dynamics, and links field observations with data collected through the OzFlux towers. This information is then also linked to remotely sensed observations of vegetation cover and leaf area taken from the ground, aircraft and space. 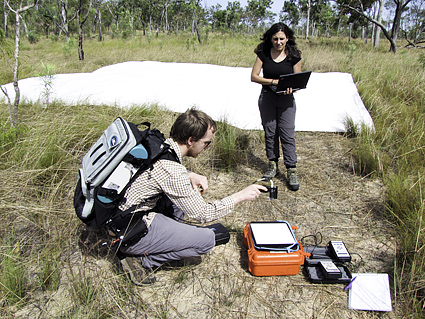 Mr Phil Wilkes and Dr Lola Suarez from RMIT were part of an AusCover field campaign at the Litchfield Savanna Supersite in June 2013. AusCover’s work in
the field plays a vital role in calibrating and validating remote-sensing products.

Nationally, all supersites are used to calibrate and validate remote-sensing products developed by TERN’s AusCover facility – a part of TERN’s infrastructure that literally has the whole of the NT covered with its collections of ground, airborne and satellite data.

A major focus of AusCover’s work in the NT is the development and refinement of remote-sensing tools to better characterise and describe bushfires. Up to half our tropical savannas can burn in a year, making tools and information for fire management especially valuable. With the vast extent of land area in the NT – almost 20% of Australia’s land mass – remote-sensing tools are particularly useful as they facilitate monitoring and assessment of large areas.

One AusCover product presented by Dr Stefan Maier of CDU at the North Australian Fire Manager’s Forum in June relates to fire spread. By using satellite data collected by the MODIS sensor twice daily, it is possible to map the spread of fire in the landscape over finer timescales than previously possible. As a result, fire managers can better understand the dynamics of fire in their landscape.

This tool has already paid off for rangers at Litchfield National Park. They have been able to use it to identify consistent patterns of fire spread in the park across multiple years.

Stefan says: ‘When I sat down with the Litchfield rangers to go over the fire-spread maps, we realised that in every year a fire was starting in a particular location and spreading through the landscape in the same way. Without this product, they wouldn’t have known that, but now that they do they can use the information when developing their fire-management plans for the coming season.’

Visualisation of land burnt by bushfires in and around Litchfield National Park in 2012. Data products and information such as this, made available by AusCover, are valuable when developing land-management strategies. (Video courtesy of Stefan Maier)*

Working alongside a diversity of local stakeholders, TERN’s research infrastructure and integrated, multidisciplinary approach is leaving a mark on the territory, opening up and enabling new discoveries and providing practical benefits to the community.

It’s hard to believe, but we still haven’t mentioned TERN’s entire NT infrastructure in this article! If you’d like to read more about other aspects of TERN’s work in the NT, follow these links:

*These visualisations are no longer available