As forecasts of almost no snow in Australia by 2050 send shockwaves through the snow sports community, Dr Renée Marchin is keeping her cool and using the TERN ecosystem observatory to study how such dramatic changes will impact our alpine ecosystems and the nation’s carbon budget. Northern hemisphere alpine grasslands are predicted to absorb more CO2, but how will Australia’s mountain ecosystems fare?

The impact of climate change on the Australian ski season has been well documented and reported. Less so, however, has the impact such dramatic changes in winter snow cover will have on our alpine ecosystems and their role in balancing the global carbon budget.

Moreover, we know that climate change has extended growing seasons and carbon dioxide (CO2) uptake in many northern hemisphere alpine ecosystems, but until now, we weren’t sure how our Southern Hemisphere counterparts will respond.

To fill these knowledge gaps, Dr Renée Marchin and her colleagues from the University of Sydney have used multiple components of TERN’s land ecosystem observatory and analysed the long-term productivity of an Australian mountain grassland ecosystem. 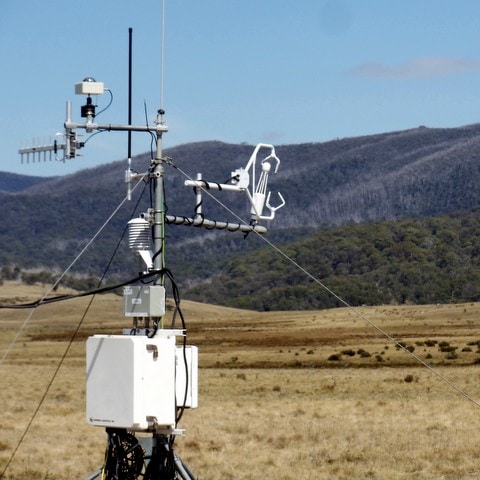 Dr Renée Marchin (right) has used data from the Nimmo eddy covariance tower (left) located near the Snowy Mountains’ Nimmo Nature Reserve, which is managed by the Bushfire and Natural Hazards Cooperative Research Centre (BNHCRC) together with Professor Mark Adams of Swinburne University of Technology and forms part of the national OzFlux network (photos courtesy of Renée Marchin)

“We used a long-term dataset collected by the eddy covariance tower located in the Snowy Mountains and made openly available by TERN,” says Renée.

“Like similar ecosystems in the northern hemisphere, warmer temperatures increased carbon uptake of the Australian mountain grassland. Annual productivity varied significantly between 2007 and 2014, with warmer months generally having higher productivity.  The potential for increased carbon sequestration is a bit of a climate change consolation prize, isn’t it?”

“But, it gets more complicated when you factor in Australia’s dryness,” adds Renée. “Net ecosystem productivity will only increase when soil moisture isn’t limited. So, when we factor in predictions of less rainfall, the carbon accounting situation becomes much more complicated.”

“The bottom line is that carbon uptake of Australian mountain grasslands may increase in a warming climate, as long as growing season precipitation remains adequate.”

The early greening of alpine Australia

In addition to analysing changes in productivity, Renée also studied seasonal changes to the vegetation, known as phenology.

“We used MODIS satellite-derived data of normalized difference vegetation index (NDVI) delivered by TERN to monitor phenology at the site from 2001 to 2016.  We also recorded daily estimates of greenness from a PhenoCam on the flux tower and found close correspondence between satellite and near-surface greenness.”

“One of the key things the combined data showed was that the grassland now ‘greens-up’ an average of 16 days earlier than it did just 15 years ago.  We think this is due to warmer August temperatures and is another potential driver of increased grassland productivity.”

Multiple components of the TERN observatory play role in study

Renée’s work is an excellent showcase of how the multiple facilities of TERN can be collaboratively used, in this case by integrating the carbon and energy exchange data delivered by TERN’s Ecosystem Processes platform, the remotely-sensed imagery from TERN’s Landscapes platform, and climate data from TERN Data Services and Analytics.

Renée says that the research infrastructure and data delivered by TERN are essential for improving our current understanding of carbon uptake from alpine ecosystems, which cover just 0.15% of the continent but have exceptional natural value and have been calculated to provide benefits worth billions of dollars to the nation each year.

Whilst not used directly in this research, TERN also provides open data and ecosystem samples collected from the Alpine Peatland flux tower site and 14 other one-hectare ecosystem surveillance sites in the Snowy Mountains’ alpine ecosystems.

“TERN data are vital to climate change scientists like me. These resources help to facilitate the world’s best research, and in turn, assist policy makers and managers to sustainably manage the Australian environment into the future.”